A Piece of the Big-Time

(my songs - my success - my struggle for survival) 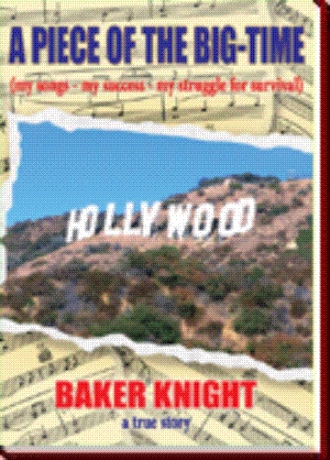 The Sunset Strip was dazzling that spring night of April first in 1958.  It was about eleven-thirty in the evening and there I was, standing on the curb of that famous and glamorous thoroughfare; looking up and down it to the east and to the west, and taking in all the sights along the way with a feeling of amazement.  To a young man fresh out of the toolies, it was fascinating.

I had arrived in an hour or so earlier on a white knuckle flight from , with a notso hotso guitar, a few clothes, about 80 bucks, and a long-standing desire to succeed in the world of music.  I was filled with apprehension, but entranced, nevertheless, by the striking display before me.

I was standing in front of the Park Sunset Apartments on Sunset Boulevard where I was to reside.  The digs were located about half a block east of , a main thoroughfare that winds its way for miles across and ends abruptly at the top of a steep hill where it hits the Sunset Strip head-on.  I was in high spirits and talking with Al Bubis, a manager and promoter in the music business at the time, who had furnished me with the airline ticket that brought me to this astonishing city of shimmering lights.  I think Al was more than slightly amused at the way my lower jaw was resting on my navel.  Wow!  This was LA----and I was really here at last.  It was hard to believe.

I was so taken in by the whole vibrant scene that evening attempting to describe it with mere ten-cent words could never do it justice.  Just saying, "It sure was pretty" wouldn’t begin to cut it, so please bear with me as I attempt to come up with a touch of silver plated prose.  Here goes:

Those alluring colors wound around through curves and corners of glass tubing filled with neon to form lustrous letters of the alphabet; and the letters blossomed into wondrous words.  Wondrous to me, at any rate.  There was one very select group of flashing neon tidings that caught my eye immediately.  The collection that silently and insidiously shouted, "Beer, Liquor, Wine and Spirits."  Sunuvabitch, this was the place!  I was home at last ...apprehensive or not.

One night I was in my new apartment all drunked up again and feeling awful when I got to thinkin’ about how groovy that Demerol shot for my spinal fluid check had made me feel. I was really in bad shape and thought it would be neat if I could get some more of that marvelous stuff (I had also recently gotten some more information on the proper dosage). It was about and I knew Dr. Bleep wasn’t on call that night so I came up with a little plan, and it was

From the Award Winning Songwriter, Baker Knight, comes his memoir. It’s brimming with a sense of humor and poetry not yet set to music – it tells one of the most heart-rending life stories you will likely hear – from the slow-paced Southern city of to the fast-track Hollywood scene and back again.  Throughout his life of triumph and failure, he searches for help for a complex medical condition, and seeks understanding and compassion from family, friends and colleagues – both seem to be elusive.  His personal and business successes make a captivating read.  He takes us back to the magical late 50’s, the 60’s, and 70’s to a Hollywood filled with the stars of yesteryear – teenage idols to the King of Rock and Roll.  The Horrorhouse of his youth is left behind as he becomes a young man, but it never seems to let go.  He is driven by a great talent and sense of survival.  It may have you laughing, crying, or tugging at your heartstrings, but it will always entertain.  This fascinating book could only have been written by someone as sensitive and gentle as this great songwriter.

Baker Knight''s songs have been recorded by over forty artists.

Ricky recorded a total of 22 songs written by Baker including "Never Be Anyone Else But You," "I Got A Feelin''" and "Sweeter Than You." "" was also recorded by Sir Paul McCartney and Bob Dylan.

Baker also wrote "The Wonder of You" which was recorded by Elvis Presley and became an international hit. The song was also done by Ray Peterson and The Sandpipers.

Dean Martin recorded eleven of his songs including "Somewhere There''s A Someone."

In addition, Mickey Gilley recorded "Don''t The Girls All Get Prettier At Closing Time," winner of The Academy of Country Music''s Song Of The Year Award for 1976.