A Biography of Alfred Lunt and Lynn Fontanne 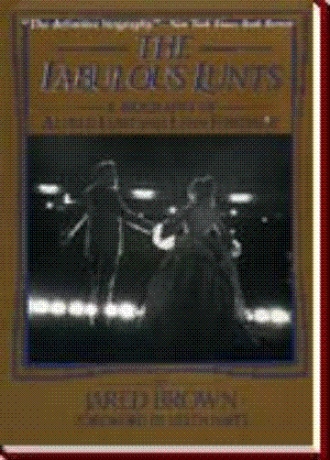 Two members of the orchestra, stranded on the second story, waited for rowboats to take them to dry ground, about a block from the theatre.

It was clear to most observers that the remainder of the scheduled performances should be canceled and the company removed to .  But the Lunts, whose belief in their obligation to perform if humanly possible was absolute, insisted on going through with the performance, even if—as they were informed—few members of the audience would be able to reach the theatre.  Those patrons who were willing to make the effort deserved to see the play, the Lunts insisted.

On the afternoon of March 19, with the streets around the theatre now inundated by the flood, the handful of people who could manage to do so arrived at the theatre in rowboats.  The Lunts told the house manager to put everyone together in the best orchestra seats.  The theatre’s electricity failed, but an emergency generator was pressed into service for the first act.  Then the flood waters poured into the cellar and the generator was rendered temporarily unusable.  All lights went out during one of the musical numbers, but Lunt and the Blondes kept dancing.  Still determined to continue the performance, Lunt lit his cigarette lighter and the other actors used candles and flashlights to illuminate the stage until the generator could be made to work again.

Sherwood, who had returned to two days before, heard a report on the 20th that typhoid had broken out in .  He called the Lunts and urged them to leave the city.  The police settled the matter by informing the Lunts that no additional performances of the play would be allowed.  Convinced at last, they agreed to take a special “refugee” train to .

As the company was boarding the train, a young girl spotted Fontanne on the platform and spoke to her.  She “said she’d come from Harrisburg by train just to see us [the night before] and thanked us for playing to so small an audience,” Fontanne said, concluding, “so it was worthwhile.”

The entire company—each member carrying his costumes, as Lunt ordered—was crammed into a single Pullman car.  As the train pulled out of , Lunt looked out the window and saw that the adjacent track was covered with water.  He signaled to Alan Hewitt not to say anything to Fontanne, who was absorbed in a game of cribbage with Sydney Greenstreet.

Because of the flooding east of , the train was rerouted north.  The journey to took nearly twenty-four hours.  Getting the set out of was a thornier problem, one with which the stage manager, George Greenberg, had to deal.  Somehow, Greenberg managed to persuade the governor of to permit a special train, loaded with Idiot’s Delight scenery, to leave despite a statewide embargo on freight.  Uncertain whether the scenery would arrive in time, Lunt told the cast that the play would open in as scheduled even if the only background was a set of black drapes.

Applause for The Fabulous Lunts “Mr. Brown has produced a thoroughly researched study of the Lunts that powerfully evokes a romantic age of the theatre ... A worthy testament to their art.” —New York Times Book Review “Their story is an irresistibly appealing one, and Brown’s telling of it will help to speed their return to our common consciousness. As darkness threatens to fall on Broadway, we are more than ever in need of the memory of who they were and what they achieved.” —The New Yorker (Brendan Gill) “A must for anyone involved with or interested in theatre and a fascinating, well-written book even for the general reader.” —Washington Post Book World “For those fortunates who missed seeing them, this book about the Lunts describes their wonder; for those of us who knew them, saw them, and were magicked, it is a surpassing souvenir, a shining memory.” —Garson Kanin “I was dazzled by the book ... It almost amounts to an American theatre history from the turn of the century through the fifties and, of course, provides a badly needed sense of heritage for young artists.” —Uta Hagen “I can testify that one’s theatre library would not be complete unless it included The Fabulous Lunts. This book is a must for all theatre lovers!” —Carol Channing

Jared Brown is the author of five published books: The Fabulous hunts, A Biography of Alfred Lunt and Lynn Fontanne (Atheneum, 1986; reissue: AuthorHouse, 2006), Zero Mostel (Atheneum, 1989), The Theatre in America During the Revolution (Cambridge University Press, 1995), Alan J. Pakula: His Films and His Life (Backstage Books, 2005) and Moss Hart: A Prince of the Theatre (Backstage Books, 2006). The Fabulous Lunts was awarded the Barnard Hewitt Award as the outstanding book about the theatre in 1986. He has also written about fifteen plays, from historically-based dramas to children’s plays to musicals, all of which have been produced.

Brown taught theatre at and at , where he was Director of the . At both universities, he specialized in teaching theatre history, playwriting and directing. He has directed approximately one hundred plays, both in university and in professional settings. He retired from teaching in 2002 in order to devote himself to fulltime writing.

He was born in New York City and raised in Los Angeles, then received his Bachelor of Fine Arts degree from Ithaca College, his Master’s in Drama from San Francisco State College and his Ph.D. in Speech and Theatre Arts from the University of Minnesota. He and his wife, Judy, now live in . They have two grown children, both of whom live in .