It's All In The Game 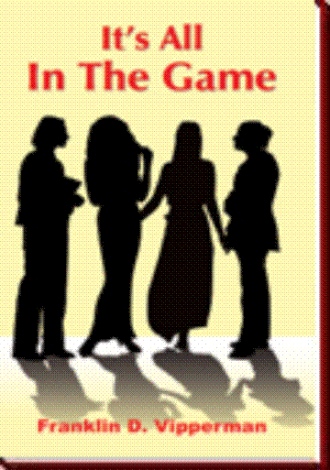 I tried to act like I didn’t notice that terrific body in front of me, with red hair, green eyes, and lots of freckles.  And, I declined to join her.  But, after very little coaxing on her part, I decided to meet the neighbors.  I had heard them almost every night in and around the pool area laughing and having fun.  But, I was pretty much of a loaner, and didn’t care to meet any neighbors.  After inviting her in, and offering her a beer and opening another for myself, we formally introduced ourselves.  And then went back out towards the pool, which was in the center of a two story rap-around apartment building.

There were several couples in, and around the pool, and Joan took me around introducing me to everyone.  She made jokes as we went.  It was pretty evident that everyone knew my name, and status.  And, that they had a little clique going, and wanted me to join in.

After all the introductions, Joan pointed to a couple of empty chairs at a sun table, and we went over and sat down.  She wasted no time informing me that all the other couples were married except her.  She had a steady guy, but he was also married.  And, she was getting tired of waiting for him to get a divorce.  She was a real chatter box, but I listened patiently.  Everyone came by and had a few words of  welcome for me, and I tried to make conversations.  But, it just wasn’t the night for me.  I made some excuse about being extra tired, and had a hard day coming up in the morning.  I made my apologies to Joan after agreeing not to be such a stranger, and went back to my apartment.

The music was still on.  I turned it down, and turned out the lights.  Getting a fresh beer, I stretched out on the couch and relaxed.  I could still hear the splashing and laughing in the pool, and my thoughts drifted over the people I had just met.  For some strange reason, something wasn’t right.  There were four good looking gals out there, and they seemed to have complete control over the whole situation.  The three guys seemed to just be there because they were supposed to be.

“It’s All In The Game” was the first to play, and I thought it was fabulous.  Evidently she had never heard it before, and never heard of  him.  She relaxed and listened.  In my opinion, it was one of the greatest songs of  all times.  That guy could really sing, and I was probably his greatest fan.  After the first song, she remarked how surprised she was she had never heard it before.  The second song came on, and we listened.  I had to relieve a kidney, so I left the room.  When I returned, she was engrossed in the music.  From the expression on her face, she was way back in time somewhere.  I was careful not to disturb her thoughts, and sat quietly.  The first side finished and brought her back.  I turned it over, and started the other side.  She stood, sticking out her hands in a gesture for me to dance, and I joined her.  We fell together smoothly, and danced as though we had been doing it together forever.  The fragrance of her hair, and slight hint of perfume, was exciting.  She drew closer and closer, until we were melted together.  We neither spoke.  Her fingers caressed the back of my neck, and the pressure grew.  Darn, this woman could get me excited easily.  I gently kissed her ear, and her body tightened and drew even closer.  Her breasts were firm and pleasant against me.  Her hips glued to mine, and a leg carefully pressed against the inside of mine.  The song ended, and went right into another, without us stopping.  Her head leaned back, and her lips tenderly kissed my cheek.  And ever so gently, then nibbled my ear.  I leaned my head back, and our mouths met.  Very gently at first, and then slowly grew stronger and harder.  Her tongue was warm and sweet, and the taste of her was engulfing me.  I was past the point of merely excited, I was exploding inside.

It’s All In The Game was a continual party, morning, afternoon, and evening.  Four ladies were tired of their husbands and wanted more out of their quiet lives.  When Frank moved into their apartment complex, they decided to share him.  Throwing caution to the wind, they jockeyed for their turns at having his company, and sharing his bed.  Them being stay at home housewives and their husbands at their jobs during the day, left them to entertain themselves with Frank who had strange hours that made him available to them when they wanted company.  When he quit his job, that was wonderful for them, for he was now available around the clock.  And they partied at his apartment every day.

The author lived this true story and admits it was one of the most memorable times of his life.  The ladies were all special in their own ways, and were seeking something more from life than what they were receiving from their counterparts.

When this single male moved into their apartment complex, they were delighted.  And quickly let him know they were available and ready.  They partied all day with him being the center of their attention.  And all of them offering themselves and their talents to him whenever he would work them into his open schedule.  It truly being the days of wine and roses for all of them.  As they laughed, joked, drank, and enjoyed life.