One Man's Hunting and Outdoor Odyssey 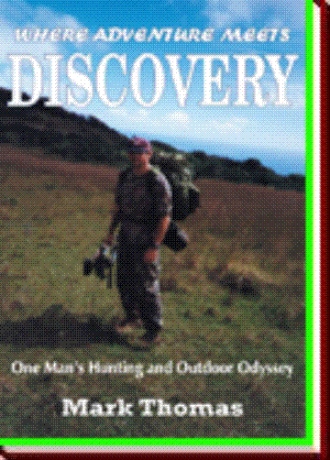 The big buck didn’t appear to be alerted in any way, but I’d give him a day to rest anyway.  Two days later – Friday – 13th of November a new plan was formed.  The wind was out of the west.  I entered from the east and hunted the second funnel.  A stealthy entry was a bit trickier and required more walking, but the plan felt right.

The hand of providence was on every preparation for my weekend date with destiny.  Work was finished with time to spare.  The weather was cool and calm with just a hint of over-cast.  Pre-entry practice shots were dead-on.  Freshly laundered hunting clothes were removed from scent-free plastic bags as I dressed in the bottom – away from the truck.  Black, green and gray stripes finger-painted onto my face were shadowed by the brim of a camouflage crusher hat.  The only sign of a westward wind was the gently rippling thread tied to the upper limb of my Myles Keller XI bow.

Visions of the brute sauntering unalarmed Northward from the thick cover and through the funnel on the east side of the bottom had played over and over in my day dreams and now permeated my psyche as I approached the tree.  Somehow I knew this was the day.

The tall dry weeds swished, the dry creek bed gravel crackled, briars pulled at my arms and legs releasing with snaps and pops, the insulated nodular loop of the Summit treestand slid quietly upward higher and higher.  Soon I was facing the West, scanning the thick cover, and waiting.  Usually my mind wanders from one thought to another, but not today.  All five senses were razor sharp and on full alert, fully anticipating the approaching quarry.  Somehow I knew this was the day.

The breeze picked up ever so slightly and set the brown weeds to swaying like genuflecting worshipers.  The only critter moving was a red tailed hawk high overhead, soaring, singing, hunting, and doing what God made him to do.  Jeremiah’s song played in my mind slow baritone unaccompanied…this was the day:

A man will always wonder

Where the fair wind blows…

Where the fair wind blows…”3

…that’s when I saw them – antlers.  Nice antlers.  It was him!  He was slowly making his way north along the creek bed, just on the edge of the thick cedar undergrowth cover – collision course.  At 40 yards he stopped, lowered his head and gave a two-inch sapling the thrashing of its life.  At 30 yards, behind a tangle of grape vines and briars, he began pawing at the earth until a bathtub-sized hole was opened.  His antlers thrashed the licking branch like a riding switch, and then he urinated - coup-de-grace on a blazing hot new scrape.

Scrape finished, he began a circuitous meandering in my general direction, none of which offered a clear shot of course.  Finally, his mind made up, he took to the

Where Adventure Meets Discovery is a rollicking fun-filled book of true stories about hunting and about life.  The author begins at the beginning remembering his first BB gun, first squirrel hunt, experiencing “the killer instinct” and growing up in rural southern Indiana.  As a young man he learns to hunt deer with bow and arrow via the school of hard knocks and recounts experiences to which any hunter can relate.  Later he shares exciting adventures hunting boar and axis deer on the islands of Oahu and Molokai in Hawaii with U.S. Navy SEALs and divers.  The author learns about God and about life from “watching wild creatures do what they do”.  He uses humor, faith and warm colloquial Midwest language to paint the scenes and bring you into the adventures.  You’ll laugh when he thinks he’s falling to his death in the pitch black night of the Pali Pass on Oahu.  You’ll cry when he loses his twin sons to twin-to-twin transfusion syndrome.  You’ll cheer when he finally secures that first whitetail trophy.  You’ll be challenged to think while the author struggles with ethics.  Hunter and non-hunter alike can relate to the adventurer in these stories, and thrill with exhilaration when that adventure leads to the “ultimate discovery”.

Mark Thomas was born in Louisville, Kentucky on the 24th of June, 1962.  Mark and his sister Beth were raised by their parents in rural southern Indiana near Georgetown.  He graduated from the Speed Scientific School of the University of Louisville in 1987 with a Bachelors degree in Electrical Engineering.  Mark now lives in Springville, Indiana with his wife Marilyn and their son Casey and works as an engineer for the U.S. Navy at the Naval Surface Warfare Center, Crane in Southern Indiana.  Mark is an accomplished guitarist and records with the praise and worship band at his home church – Sherwood Oaks Christian Church of Bloomington, Indiana.  ''''Where Adventure Meets Discovery'''' is his first book.