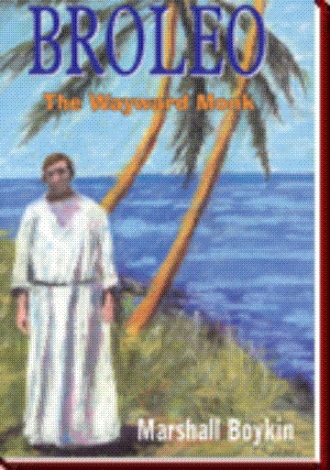 It is , and I am on my way to , to visit Brother Leo, a Trappist monk.  I call him Brother.  I often refer to Brother, with a teasing smile when in his presence, as the monk who wanted to become the Monastery’s shoemaker.  Four days earlier he spent his eighty-third birthday at the Trappistine Monastery where he lives located near Curicó, one hundred miles or so south of .  There he celebrates the Mass daily, standing, sitting and kneeling in a quiet corner of the transept of the .  His quickness and vigor of earlier days are no more.  Kneeling is difficult, and the rising again more so.  He had two operations on a hip and now walks slowly with the aid of his cane, his shoulders slightly stooped.  He suffers from a heart malady for which he receives treatment.  His memory, once so sharp, sometimes fails him, or so he says, and it is probably true.  However, he still has that gentle smile with which, accompanied by a slight tilt of the head, he greets his friends.  When we meet he will give me un abrazo, and will say, “God love you, Marshall.”

I first met Brother January seventh of 1966, my birthday, or shortly thereafter.  Earlier, Frances Farenthold, known to me and all her friends as Sissy, asked if I would join her in representing Brother in a lawsuit pending in the State of Texas District Court of Jim Wells County.  The courthouse is located in the town of Alice made famous, to some infamous, by Box 13 which contained those ballots that were the margin of victory in the election of Lyndon Baines Johnson a United States Senator.  It was in my office in about forty miles east of Alice that I became acquainted with this “wayward monk.”  He had fled the monastery in which he was living in order to evade the process the local Oregon Sheriff and his deputies were attempting to serve.   He was dressed in simple civilian clothes, khaki shirt and pants as I recall, and no tie.  Forty-eight years old and slim, he stood an inch or so over six feet in height.  He stood straight and appeared healthy with no noticeable physical infirmities unless it was his left eye to which he would occasionally apply his handkerchief.  He explained it was an injury to the tear duct occurring when he was only nine.  He was friendly, unafraid, and direct in his responses, tending to be quiet and gentle with only a flash of repressed anger now and then.  He often laughed, softly, finding humor in the recounting of his experiences.  This is the man I had theretofore heard described as a modern day Rasputin, a corruption clothed in the habit of a monk.

Sissy’s father, Dudley Tarlton, my first employer and mentor in the practice of law, often reminded me that life can be stranger than fiction, that truth is evasive of determination, that in the search for truth some degree of skepticism is an essential trait of character, particularly in a lawyer.  Skepticism was not to be equated with disbelief.  It only required a person keep open the door to doubt.  My door was open.  However, keeping the door open in no way prevented Sissy and me becoming advocates in Brother’s cause.

The cause, numbered 12074 on the docket of the claimed that prior to her death Brother Leo unduly influenced and took advantage of the wealthy widow, Sarita Kennedy East.  Kenedy County Judge Lee Lytton, son of Mrs. East’s cousin, Stella Turcotte Lytton, filed the suit.  Judge Lytton was subsequently joined by Bishop Garriga of the Corpus Christi Diocese of the Roman Catholic Church and by Jacob Floyd, Mrs. East’s lawyer.  The claims of undue influence spawned similar claims by relatives resulting in a will contest.  However, the battle in Cause No. 12074 was who would control the multi-millions given and bequeathed by Mrs. East to the John G. and Marie Stella Kenedy Memorial Foundation, a charitable foundation named for her parents and created by her at the same time she executed her will.  The foundation became known more simply as the Kenedy Memorial Foundation or KMF.

A Trappist monk, he helped a wealthy widow, Sarita Kennedy East, write her will that left the largest portion of her estate to a charitable foundation.  She called him her spiritual advisor.  When she unexpectedly died, her Bishop and others brought suit against him claiming he unduly influenced her.  The Archbishop of Philadelphia, appointed by to investigate and settle the dispute, branded him a "wayward monk."  Some accused him of a meretricious relationship with the widow.  His Abbot banished him from the Trappist Order.  He became an eremite; his cause the Church''s promise to Mrs. East.  His name, Brother Leo, an anathema to some, may have been forgotten by many; the legacy has not.

Marshall Boykin III was born in , about eighteen miles north and west of .  He attended the in both before and after his three-year tour of duty in the United States Navy, graduating with Bachelor of Arts and Law degrees.  Upon graduation he moved to and began the practice of law.  He presently practices in the firm of Wood, Boykin & Wolter.  BROLEO, The Wayward Monk, a biography of a religious he once represented, is his first published book.  He has written short stories, poems and a novel that he has not published, distributing limited copies only to family and friends.