Getting to the Point.

In a dozen pairs of shoes 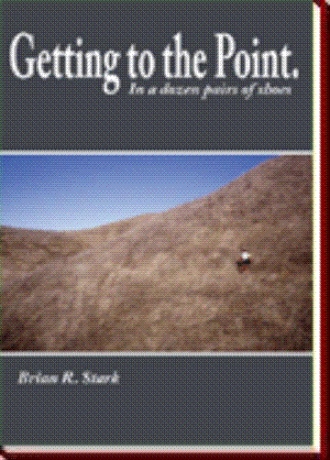 As I made my way back up the hill from to rejoin the route, I noticed a Reese’s Cup candy bar wrapper on the side of the road.  Perhaps it was my “meager” 12-pancake breakfast, or my body anticipating high caloric need during the day’s run.  Whatever the reason, the instant I saw that wrapper I knew that I had to have a Reese’s Cup right there and then.  At the top of the hill there was a small gas station, and I bought not one but two packages of the peanut butter and chocolate delights.  Sitting there on the steps of that gas station at eating my 500-calorie snack, I coined a new phrase, “Trashvertizing.”  My new definition would read as follows, “trash•ver•tize (trash•ver•tiz’), v. 1. The practice of secret agents in the candy bar industry who place their product in highly visible and appealing locations such as ditches and gutters where passersby will see them and be tempted to purchase said candy bar at next opportunity.”

Arriving at the Counterfeit House a few miles later I noticed that the house itself looked in disrepair.  There was no “open” sign or other evidence that visitors were welcome.   I approached a trailer in the side yard of the house and knocked on the door.  An older woman came to the door but upon seeing someone she didn’t recognize, locked the storm door and waited to hear what I wanted.  I explained that I was running across the country and had been looking forward to touring the Counterfeit House for 500 miles.  Unimpressed, she simply said, “Well, it’s closed.  The roof leaks and it’s not open to the public.”  I was heartbroken.  What mysterious things were inside that home just a few yards away?  Perhaps this woman was getting back into action and used her, “Sorry, closed” speech to cover the printing operation going on in the shadows of the old home.

When I pressed her for a few stories about the old days she finally sized me up through the screen and gave in to storytelling as she unlatched the door and came outside.  As we sat down on the porch swing she slowly warmed up to me and told me about this amazing site and her connection to it.

Oliver Tompkins built the “Counterfeit House” in 1840.  Mr. Tompkins designed the home for the purpose of making counterfeit 50-cent pieces and $500 bills.  Just why he chose to make only those two denominations is unclear.  The doors to the home had special locks designed so that even when locked, “authorized” people could enter by turning the knob a certain way.  Several slots were carved away above interior doors.  These slots were where the counterfeit money was stored in bags and then replaced with real money when an exchange took place.  In the attic, there is a small window in which Mr. Tompkins placed two lights.  One was green and the other red.  From the advantageous position of the home on a high bluff, the building can be seen from the over one and a half miles away.  Boat captains who knew of Mr. Tompkins’ business could look up the hillside and if the green light was on, it meant that the coast was clear and that they could come up to buy money.  If the red light was on, however, it meant trouble and to stay away.  For additional security, seven chimneys were erected in the home.  Of the seven, only two were actually used as such.  The other five were false double chimneys that had stairways built inside them.  Through an elaborate system of ducts, the two real chimneys sent flumes of smoke out the five fake chimneys.  From inside the fake chimney, and hidden behind a plume of smoke, Mr. Tompkins could see who was coming up the hill.

In the back of the home was the actual counterfeiting room. It was built with no doors or windows.  The only access to the room was through a trap door in the ceiling and a trap door in the floor.  The floor trap led to an escape tunnel that went over one hundred yards underground “big enough for a man and a horse,” to a nearby cliff, as a grainy photocopied brochure stated.

As legend has it, Mr. Tompkins’ sister, Ann, tried to pass one of his phony $500 bills in and that exchange led police to follow her to her brother’s home.  When the police were closing in, it is believed Mr. Tompkins and his daughter escaped through the tunnel and blew it up on their way out.  To end the police chase that lasted for several years, Ann returned to the Counterfeit House with a coffin that she said contained the remains of her deceased father.  A mock funeral was held in the home.  It is rumored that Mr. Tompkins watched the funeral from one of his chimney lookouts.

Though I never got to go inside, my new friend made the history of the house come alive with her stories.  I did notice, however, that she seemed tired of her connect

Getting to the Point.  In a dozen pairs of shoes is the story of the first modern-day trail run across .

Running alone and wearing only a 10-pound pack, ultra runner Brian Stark often had to rely on the kindness of strangers, and hope for mercy from the elements.  Over the course of his 8-month trek across , Brian learned first hand what this country is really like, the diversity of its people and their experiences.  This is more than just a book about running, it’s a book about people.

If you liked Forrest Gump or A Walk Across America, or if you just like a rousing good story complete with daily wrong turns, surprising rescues by strangers, a blossoming romance, and a Hollywood ending, this book is a must read.

Brian Stark attributes his success as a distance runner to his parents who drove 300 miles away from a pit stop on a family vacation before they realized that he had gotten out of the van.  Brian was nine years old.  He started running after the van and hasn’t stopped.

Since completing his 10,000th mile in high school, he has crossed 26 states on foot, including one solo-5000-mile trail run across .  With a fair amount of endurance, uncanny luck, and the assistance of hundreds of strangers, learn how is really doing, from one who crossed its forgotten byways at six miles per hour.