Betrayed by a fingerprint 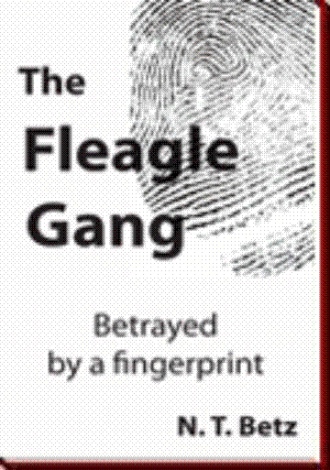 The four bandits spread out to secure the bank. One, later described as “younger” stayed near the front door and one “wearing glasses” moved to cover the side door by the fourth teller window. The older looking gang leader went straight to the first teller’s cage and with a wry smile pointed a gun in the face of Assistant Cashier William Garrett and repeated the order to get his hands up. The largest of the four headed toward President Amos Parrish; bank customer William H. Hill, a local hog buyer; and Jaddo who were together just outside the bank president’s private office.

Hill was grabbed by the largest robber and thrown to the floor.

A.N. Parrish was smoking a cigar and leaning on the gate talking to his son, Jaddo, near his desk, and Hill. When they heard the bandit’s command to put up their hands, Parrish ducked into his office. It was a few steps to his desk where he pulled out a single-action Colt .45 named “Old Betsy.” He returned to the doorway where he cocked the gun and aimed at the nearest robber.

His first shot caught the largest and nearest robber in the mouth. The man staggered, but didn’t fall. Newton Parrish was close enough to leave powder burns on the bandit’s cheek. Parrish cocked the gun again, but it misfired. By the time he got it cocked for a third time he had been shot and his third bullet went wildly into the ceiling as he fell back into his office fatally wounded.

The robber who had been shot through the jaw fired his .44 at least twice, hitting the 77-year-old bank president in the head. Again, the shots were fired so close to the victim there were powder burns on Parrish’s face. At the same time those shots were fired, the younger looking robber closest to the front door opened fire through the frosted glass wall of the office. He fired at least five shots, one of which may have hit the elder Parrish in the head before he fell. According to Hill, when there was no return fire the younger robber went into the private office muttering he would make sure the “old bastard” was dead or dying. The robber picked up the gun Parrish had used in a futile attempt to stop the robbery. The robber came out with it saying, “I got the old devil.” Hill heard empty shells from the bandit’s gun hit the floor as he reloaded his gun.

True crime from the roaring 20s based on the murder of four men involved in a brazen daylight bank robbery in .

The case hinges on a single fingerprint found on a murdered Kansas doctor’s car, and the fledgling Federal Bureau of Identification and the new boss J. Edgar Hoover play a crucial role in turning the fingerprint into solid evidence used to find, arrest and convict members of the Fleagle Gang.

The Fleagle Gang robbed banks and trains in , , and of over $1 million in the 10 years they operated.

Three gang members were hung at the Colorado Penitentiary a little over two years after committing the Colorado bank robbery. The fourth was trapped and shot on a train in by postal inspectors and detectives from several states.

Cartoonist Al Capp used one of the gang to create his character Evil Eye Fleegle in the Lil Abner cartoon strip and Broadway show.

Cartoonist Carl Barks used the Fleagle Gang as the inspiration for The Beagle Boys who have tormented Donald Duck since 1951.

N.T. (Tom) Betz has spent a lifetime in journalism and on the . A U.S. Navy journalist and a graduate of the , Betz started his career delivering papers for his family’s newspaper in , winning his first of numerous journalism awards as a teenager.

He grew up on stories of the First National Bank robbery, and the Fleagle gang, originally reported on by his grandfather, Fred Betz, Sr.

Past president of the Colorado Press Association, Betz has retired as editor of the Goodland () Star-News closing out his more than 50-year journalism career. He continues to explore the history and working on more books about the states.