The Dirty Little Secrets of the Car Business

How to $ave Yourself Thousands 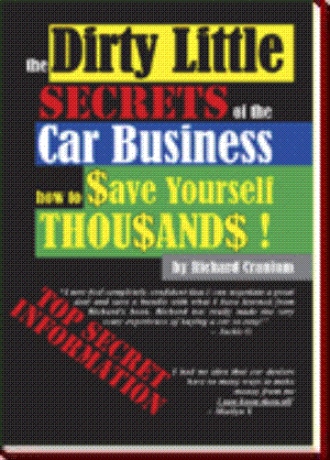 Each year millions of people over pay car dealers by hundreds or thousands of dollars when purchasing or leasing a vehicle. This is due to a lack of knowledge or awareness on the part of the public, in very specific areas of dealer profit centers when negotiating new and used vehicle’s purchase or lease.

‘The Dirty Little Secrets of the Car Business’ is an uncovering of the hidden profit areas that have finagled millions of dollars from the trusting, unsuspecting public. The author lays it out in simple, easy to understand language and shares with you how to avoid being ‘taken for a ride’. He puts forward easy steps to follow in order to steer clear of the common pitfalls in which most consumers are trapped when purchasing or leasing a vehicle.

Topics discussed within this book include:

Once you have applied these simple techniques and negotiated by the means fully explained in this book, you will realize how easy it is to save hundreds and possibly thousands of your hard earned dollars. You will never again overpay for a new or used vehicle. It may be the largest amount of money you ever make for your time.

When I was about 19 years old, I walked into a dealership and asked: How much for this car? The salesperson told me the price and I said I was pretty green when it came to negotiating for a vehicle. Then, a number of years later, when I was just starting to sell cars, one of my first customers was a factory worker. How much for this car? I told him the price and like me, he said I’ll see if I can knock off a few hundered for you. He was very happy. went to the sales manager and presented the customer’s deal with the few hundred off to which he replied,– sniffing a ‘lay down’ buyer. ‘OK,’ he added. But get him to sign over to us this $500 customer appreciation incentive from the manufacturer. A customer appreciation bonus is supposed to go directly to the customer. It was then I knew that I was eventually going to write this book, to help those like my prior self – an unknowledgeable customer, get a fair deal.

Richard Cranium is a vehicle sales veteran. He was the typical ‘car salesman’ until he realized that people shouldn’t be so easily taken for a ride when buying a vehicle. Throughout his career, first as a Vehicle Salesman, then as a Finance Manager, Sales Manager and later as a General Manager, Richard has made tracks while giving consumers ‘a fair deal.’

In his book, Richard gives the reader the answers as to how consumers could save money when buying or leasing the vehicle of their choice. “It will bring consumers up to speed fast; leveling the playing field.”

“Today consumers must arm themselves with knowledge through education to protect themselves and their money.”

But where do they turn to for help? The public, through various means and ways, is getting educated slowly but surely, however this book is a one stop encyclopedia for today’s consumer to turn to for every topic one could think of. The information contained in this book saves the consumer both time and money.

Richard concludes saying: “After reading this book, you will be confident in having acquired the knowledge and the negotiating skills to achieving your goal – getting a fair deal.”