Reaching for a Star

A Memoir of My Life, My Music, and My Friendship with Famed Singer Frankie Laine 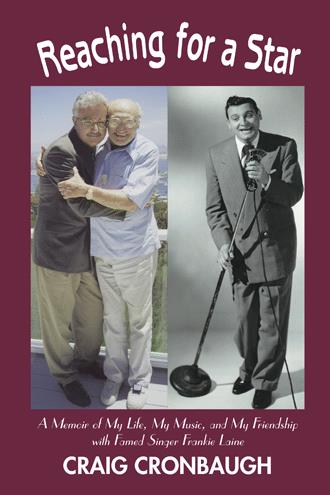 It was almost twelve-thirty. I grabbed my suitcases and began ambling toward the hotel double doors to make my way to the assigned meeting location at the foot of the outside steps. As I approached the doors, I looked through the door windows and immediately felt two distinct emotions—fascination and trepidation. Of course, I recognized him immediately and couldn’t wait to meet him, but I hesitated momentarily. He was striding up the stairs from the outside toward the hotel doors, seemingly looking rather angry. The last thing I need is to have him angry with me right from the start!

In that moment, I did my best to prepare myself for a heated outburst from him. He’d want to know why I wasn’t waiting outside as he’d instructed on the phone.

To my utter astonishment, he simply smiled, held out his hand, and very graciously said, “Hi, Craig. I’m Frankie Laine.”

Whenever I mention my Frankie Laine association to someone for the first time, two questions always come up: “Why are you interested in Frankie Laine and his music?” and “How did you meet Frankie?”

I suppose the first question relates to my age. I was born a decade after Frankie had recorded “That’s My Desire” in 1946. That record became Frankie’s first to sell a million copies in 1947. Furthermore, Frankie was already internationally famous by 1954, the year my parents were married.

Why did I become interested in Frankie Laine and his music? I can sum it up in one word—emotion. Frankie, now retired, is an expressive person. As a true “song stylist,” Frankie shaped and phrased the words in a melody, thus creating a style that was all his own. Indeed, all Frankie Laine fans treasure Frankie’s great ability as a vocalist. However, as far as I am concerned, the allure of Frankie Laine goes beyond his musical voice. I think Frankie’s immense emotion and profound appreciation for what he sang, regardless of whether it was a jazzy, up-tempo song or a slow ballad (or any other type of song), were what always captivated me.

This book answers the second question detailing the story associated with the first time I met Frankie Laine. Nonetheless, when I met Frankie in 1985, our time together was notable in an unexpected way. I experienced another aspect of Frankie Laine, which had absolutely nothing to do with music—his kindness. Although I had read stories about what a nice person Frankie always was, I witnessed, firsthand, how much he truly cherishes his fans.

Primarily, I had two goals in writing this book. First, I needed to assemble all my wonderful Frankie Laine adventures and put them down on paper in an organized fashion before my memories of the events faded. Therefore, I searched through numerous videotapes, audiotapes, newspaper articles, letters, photographs, and e-mail notes within my prized Laine library. Of course, I also relied on my personal recollections. Second, I aspired to relate to readers how an ordinary person (me), by sheer determination and action, had succeeded in his initial quest—I did meet Frankie Laine. Additionally, I developed a friendship with this amazing, famous singer.

Each person has a special dream. Some dreams do come true.

CRAIG CRONBAUGH, Director of the Legislative Information Office with the Legislative Services Agency at the Iowa State Capitol, holds an associate’s degree in Communications Media from Kirkwood Community College, Cedar Rapids, Iowa, and a bachelor’s degree (cum laude) in Communication Broadcast/Broadcast Journalism, with a minor in political science, from the University of Northern Iowa, Cedar Falls. He is a former professional musician (drummer) and newspaper editor, writer, and photographer. As famed singer Frankie Laine’s special friend and a collector of Laine’s recordings and career memorabilia, Craig has written articles; has written, produced, directed, and hosted a distinctive radio program; and has appeared on Iowa statewide television regarding his Frankie Laine avocation. Craig has been highlighted briefly and has been given a research screen credit in the 2003 internationally distributed documentary Frankie Laine: An American Dreamer. In addition to having many newspaper articles published, he has a short story included in an edition of the literary publication Inner Weather, published by the University of Northern Iowa. Craig lives in Des Moines, Iowa, with his wife, Marlene.