The Work of Charlotte Selver 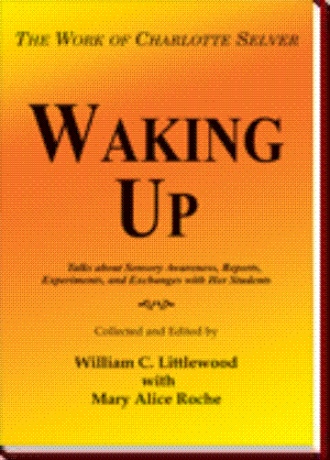 In the 1940s Charlotte Selver (1901-2003) introduced to the United States the practice she called Sensory Awareness, a term she herself coined. In the 1920s and 1930s in Berlin she had been a student of the originators of this work: Elsa Gindler, a teacher of Harmonische Gymnastik, and Heinrich Jacoby, an innovative educator and musicologist. Their thesis was a fundamental one. First, as healthy human beings, we are born with all possibilities for impression and expression. Second, if these possibilities do not develop, it is because we have been hindered by our early training. Finally, we can grow and change at any time through direct attention to what is happening in us in each moment as we move and breathe and go about whatever task presents itself. Thousands of people studied with these seminal teachers, and their pupils carried their work to no fewer than nine different countries. As recently as March 2002, though hearing- and vision-impaired, Charlotte Selver continued to give workshops in the United States, in Europe, and in Mexico. Much like her teachers, Elsa Gindler and Heinrich Jacoby, Charlotte Selver herself wrote practically nothing for publication. In keeping with the work they offered, their most telling words were spontaneous responses to class situations, to the actions and questions of their students. It is only in transcripts of their workshops over the years that one could find words coming somewhere near the essence of this basically experiential work. Unfortunately, all the tapes made of Elsa Gindler’s classes were destroyed by the bombings during the Second World War, and the books published from the courses of Heinrich Jacoby have not yet been translated from the German. As for Charlotte Selver’s interest in promoting in print her own work, for many years Charlotte allowed only a modicum of material to be published from the many tapes of her many classes. However, in 1974, her second husband and colleague, Charles V. W. Brooks, published his own account of her work in his Sensory Awareness: The Rediscovery of Experiencing. Another major break-through came in the late 1970s, when Charlotte herself asked me to make selections from the audio tapes of her classes for the purpose of publishing a book of her actual classroom comments and interactions. I had by then studied with her for six or seven years and had been a member of her first long-term (nine-month) Study Group of 1972–1973. Even so, I was intimidated by the task. How was I to know what Charlotte considered important? How could I hear with her ears, see with her eyes? Worried and unsure, I had several consultations with her about this problem during those first months, but despite my doubts she was always encouraging, and at length she said, “Pick out what you think is important.” With this mandate I settled down to reading through the available transcripts and listening to the many tapes. Over the ensuing years the resulting manuscript was compiled, revised, put away, resurrected, and gone over again and again with extensive editing help from Mary Alice Roche, who has known and worked with Charlotte far longer than I, and with whom I have collaborated on other editing projects over the years. These tapes and transcripts cover more than two decades of Charlotte Selver’s workshops. Only for the classes transcribed in the Appendices are the dates and places given. The excerpted passages in the rest of the book come from many different classes given over a considerable number of years. Given Charlotte’s desire to find passages that would represent her teaching, it made no sense to me to present them separately or with endless footnotes. Thus, they have been arranged by topic (insofar as Sensory Awareness can be so arranged—it is, after all, a seamless work) in the hope of providing a text that would feel like Charlotte speaking and answering in a class session. The aim has been to represent the heart of her teaching as faithfully as possible, using only her own words. How representative these selections are can only be a moot point: others might well have chosen differently. We hope there will be more and different representations of her work in future. Charlotte’s constant emphasis on practicing Sensory Awareness at any and all times in one’s daily life has been her single most important lesson for me, and the time spent working on this manuscript has illuminated her teaching and impressed on me the subtlety and relevance of what she offers. I can now more easily trust myself to know when I am ‘out of balance’ and what to do about it. And, wonder of wonders, the habit of listeni

Although the practice of Sensory Awareness, the rediscovery of experiencing, is nonverbal, its essence can be distilled from the tape-recorded words of its seminal teacher, Charlotte Selver, in response to her students’ actions and questions during her classes. This book is a lovingly selected and skillfully edited compilation of excerpts of more than two decades of Charlotte Selver’s profound teachings, colorful sayings, and rich insights, arranged topically. They represent the heart of her teaching. Using only her own words, the text of each experiment feels like Charlotte Selver herself speaking not only to her class but to the reader. The reader is invited to try out some of the suggested experiments.

The teachings of Charlotte Selver, the founder in the U.S. of Sensory Awareness, are preserved almost exclusively as audio tapes of her many classes. In the late 1970s she entrusted William C. Littlewood with the monumental task of turning those tapes into a book of her classroom interactions. It is her “voice” that speaks to the reader from these pages.

William C. Littlewood studied for years with Charlotte Selver and served as editor of the Bulletin of the Sensory Awareness Foundation. For shepherding to completion the first book about Sensory Awareness, he received the highest praise and deepest gratitude from its author, Charles Brooks, “for tempering the alloy from which this instrument was forged.”

Mary Alice Roche, a long-time student of Charlotte Selver, writes extensively on Sensory Awareness and other topics. She helped found the Sensory Awareness Foundation in 1971, became its first archivist, and edited most of its Bulletins.