OF THE ENGINEER WU NUNG LAI 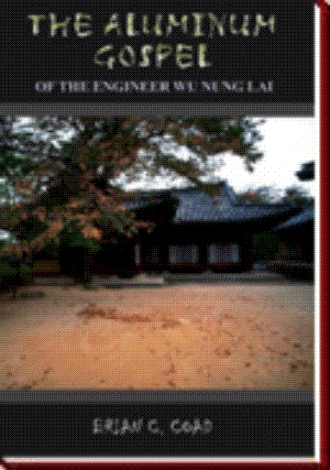 The small person who would later become the engineer Wu Nung Lai, God seeker, murderer, and ultimately, martyr, crouched among reeds tall enough to hide him even if he stood. Satisfied he had not yet been detected, he crept towards the hillock in the marshland where, gnarled and twisted, a lone pine grew. He did not pause to wonder why this tree, unlike most that had once grown near the village of Hidden Winds, where he lived in his mother’s hut, had escaped some villager’s axe. Wu’s child’s eye saw that it existed. His child’s brain, as it always did, accepted the realities around it without question. To happen upon an unfelled tree, even in those hard times, was unsurprising. What was surprising, what set his small chest tingling, was his perception of that which had concealed itself behind the tree.

The tattered and dingy blue gown Wu wore impeded his progress. It was an old gown of his mother’s in which she encased him on warm days to save his heavier boyish clothing for colder times. More than once she had promised to cut the dress down to fit him, but had never done so. That promise, like most others, was blanked from her fuddled mind as soon as given. The entangling skirts, his mother’s inability to keep promises, and the tree towards which he slithered between the reeds were of little concern to the boy. They were things as they were, outside himself, not matters to be questioned. But he could surely have moved more quickly, with less chance of disturbing that which he knew lay hidden behind the tree, if there was not such a burden of cloth to tangle his knees. He looked back over himself. The flimsy fabric trailed behind him like blue dragon’s breath.

He eased reeds aside, crept forward again with an almost swimming motion. Ooze seeped through his mother’s gown, chilling his body. Beside him, roped to his shoulder by a tasseled belt that had once been the girdle of the gown, he dragged the small woven basket that she had sent him out to fill. The basket would have been a negligible burden for an adult, particularly as it contained only half a dozen or so of the white search-under-flat-stone maggots he had been ordered to find. To the child, but a handful of underfed years old, it was almost as great a hindrance as his dragging skirts. It was, moreover, a constant reminder of troubles to come when, dusk forcing him to return to his mother’s hut, he’d have to show her the meager results of his afternoon’s foraging. Additionally, she would surely find fault with the grubs he had collected, for they were not the plumpest that had ever been found.

For the moment, he told himself, his mother’s future anger was of no importance. It was important only to advance secretly towards the twisted tree, undetected by that which it concealed. Her tantrums, of which he had had much experience, lately lasted scarcely longer than her promises. It had been a long time since she had found energy to pull from the thatch of her hut, where she kept it far from his reach, the bamboo rod she used to beat him. Should he be beaten, that, too, was of no consequence, compared with the joy that would be his, should he successfully reach his objective.

Without question, behind the trunk of the pine tree was hidden that wonder, or, as he had named it, Marvel, for which, since his brief life began, he had felt himself driven to seek.

Many ordinary people did remarkable things in the mid-twentieth century.  Wu Nung Lai was one of them.  A child in rural , he sought to merge with an elusive Marvel that a hermit said was God.  Wu becomes a metallurgist, with duties at an Industrial Complex.  A piece of equipment explodes.  Wu experiences God in the explosion, but is demoted.  His college mentor, Professor Hsiang-Nu, finds him Instructor duties at .  Liang, a student, helps.

Cornishman Brian C. Coad comes from that mining that provided the tin, lead, zinc, and copper that underpinned the Industrial Revolution.  He became a metallurgist, next best thing to being a mining engineer. Following Cornish custom, he immigrated to the , where he worked on aerospace and electronic materials. His stories about inventors and inventions have been published in leading science fiction magazines, in the novel ADVENTURES IN THE PATENT TRADE, and in the story collection NOTES OF A PATENT ATTORNEY, the latter books published by AuthorHouse.  Certain aluminum alloys harbor a microstructure that Westerners call Chinese Scrip.  Coad wondered what would happen if a Chinese metallurgist could read the script.  THE ALUMINUMGOSPEL followed.