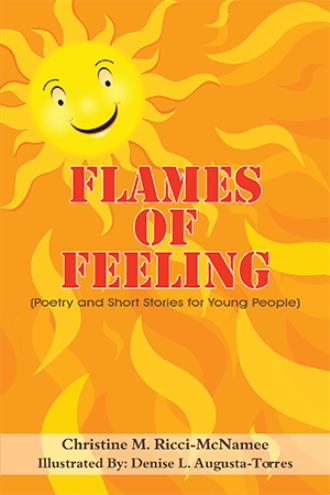 The flames were like glassy panes of red
crackling as they burnt.
Burning everything in sight with their strong
might.

The firemen tried and tried but they could not
put out the wide spreading fire that was burning
all through the night.

Then the rain with its heavy drops fought the flames
drop by drop.
Finally the fire, with a sizzling sound gave up and
turned to ashes lying on the ground.

Sitting on the counter waiting to be used. I can
fry, bake and sizzle all kinds of food. With the push
of a button, I’m off to work until my timer buzzes and I
drive everyone beserk!

I come in various sizes, but in only one shape. Others
like me always seem to gape. I’m rather useful. I can
do lots of things. People always say what happiness I
bring.

I’m not too expensive, yet not too cheap. When it
comes to reheating things, I’m the top of the heap.
Everyone should have me in their humble homes. Well,
I have to get going now before my buzzer drones!

Flames of Feeling is a collection of poems for children and young adults on various themes written when the author was between the ages of nine and nineteen.  The poems are divided into 4 sections:

Christine M. Ricci-McNamee is an honors graduate of Salem State College in Salem, Massachusetts where she earned her B.A. in English/Written Communications. She presently resides in East Boston, Mass, in her childhood home with her husband Joseph and cocker spaniel Logan.

Christine was the winner of the (1986-1990) Presidential Arts Scholarship in Creative Writing at Salem State. She also was a (1986) American Poetry Association Poet of Merit, as well as the (1986) winner of the Boston Public Library Scholar’s Award. Her poetry has appeared in several anthologies such as the (1987) American Collegiate Poets, the (1987 & 1989) editions of the American Poetry Association Anthology, the (1989) American Anthology of Contemporary Poetry and most recently in “A Time To Be Free” (2000), a poetry anthology published by Quill Books.

Flames of Feeling is her first book which is a collection of poems for children and young adults on various themes written when the author was between the ages of nine and nineteen. Also included are two short stories for children.

Denise L. Augusta-Torres, a free-lance artist, is a close friend of the author who lives in Southern New Hampshire with her husband Roberto, two children Kaitlin and Nathan, two dogs and three cats.