A Potpourri Of Poems 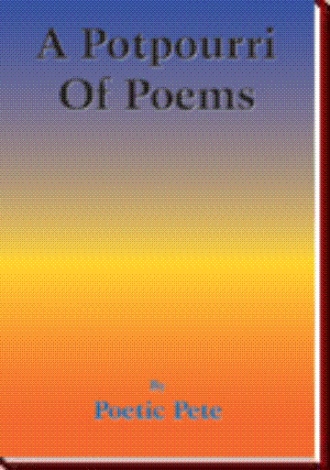 Eyes look on like fairies,
Little twinkles, prancing, galloping, and dancing
Never quite nosing in
On life’s fishery.

Up on his white horse,
Horse of Democracy, cantering around,
Makes me croak, skip a beat,
No brownie points here found.
Nothing but throw-up would be worse.

Will Trent Lott soon join the party?
No way, not in a nunnery,
Rose petals 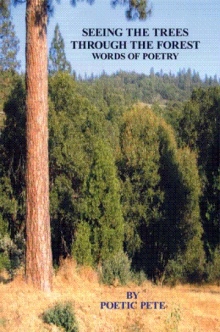 SEEING THE TREES THROUGH THE FOREST
Poetic Pete
$14.95 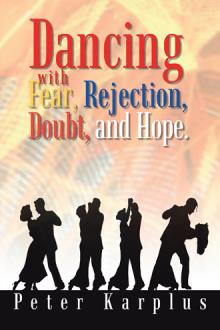 Poetic Pete™, a.k.a. Peter Karplus, author of Dancing with Fear, Rejection, Doubt, and Hope. In this second book of poetry he explores both the personal and the political arenas of life using free verse, haiku, iambic, and rhyme with an amazingly sensitive understanding dipped in his own brand of humor. Making dedications to those people in his life whom have held special meaning for him, and expressing his thoughts on the change the world has experienced because of 9/11/01. As a conclusion, Poetic Pete™ proudly presents to the world his new form of word poems. Cohesive poems "framed" (created) from word lists chosen by each poem recipient giving the poem that added personal twist, hence their name Frame-Word™ Poems. These poems exhibit his literary abilities at their comedic best. The following preview is a Frame-Word™ Poem. Requests for Frame-Word™ Poems can be placed through Quikmind@yahoo.com.

Poetic Pete™, a.k.a. Peter Karplus, author of Dancing with Fear, Rejection, Doubt, and Hope, born and raised in , has had to live with Cerebral Palsy since birth and suffers from Epilepsy. He finds poetry to be a versatile tool in expressing his thoughts and feelings. Moreover, verse unleashes his quick intelligence, which goes unseen by strangers, because of their first impressions from his slow speech, poor coordination, and bent “book cover” body. Peter’s range of personal experiences, knowledge, and understanding bring a distinctive and perceptive special sensitivity, and sense of fun or folly to his poetry.

Also available by this author: