Mt. St. Helens and the Secret of the Bar-Roo Forest 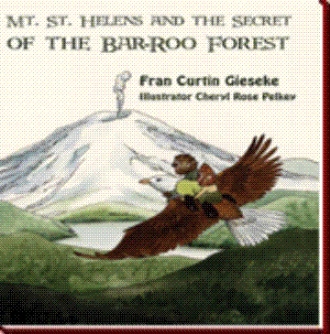 The best thing about being a pigeon is being able to blend in with all the other ones in the civilized world. A civilized pigeon did have it’s advantages, but as Blabber would soon find out, it had it’s disadvantages, too.

“You mean people come and feed you?” Blabber asked a big city pigeon, pecking away at his lunch in a park in .

“What planet are you from, Mac?” the city pigeon replied.

“I’m not from around here,” Blabber said, as he looked around at all the city pigeons gathering around. “Have any of you heard of a bird called a Condor?”

“Nope,” said the first city pigeon, adding, “If your smart you’ll keep moving. This is a pigeon-eat-pigeon city, not big enough for newcomers. You could get beaked to death if you run into the wrong pigeon. If I were you I’d scram.”

“Boy, the city sure isn’t friendly-not like where I come from,” Blabber said sadly.

“Cinnibar, I hope I can find you. This is going to be harder than I thought,” he said to himself as he spread his wings to the southerly wind.

Wrong Wing was Sourgum’s closest aide. (He had no friends). He came to report what the Giant Termite spies overheard.

“Sir, uh Sir, I have some very important news. It seems that the Hibble Gibbles and the elves are leaving the forest. Something about the mountain erupting. Can you imagine that?  I’ve never heard such nonsense.”

For a Giant Termite, Sourgum was smart. He stood up quickly with a puzzled look on his face, and then he began talking (mostly to himself). “It doesn’t make sense... it just doesn’t make sense. We’ve tried to do everything to make them go away. We’ve raided their import and export business... we’ve spied on them... we even ruined Mana’s birthday party. We have done everything possible for generations to make them go away. And now, could it really be true?  There is only one way to find out.”

“Wrong Wing, you must go capture one of those Hibble Gibbles and bring him to me. I must find out the truth. Don’t get just any of them; get the one that is always with Mana. Now fly away - hurry.”

“Yes sir, but just one thing.”

“You know what happens when I try to fly. I just keep going around in circles. Could I run fast instead?”

“Whatever. Just make sure to take some other spies with you. I don’t want any mistakes. Now go!”

Peppercorn and Ditty Blossom had been childhood sweethearts. Their friendship had grown through the years and they were planning to be lifelong companions. This was to be sealed in a “Companion” ceremony on the night of summer solstice. Their plans had to be changed, due to the mountain erupting. They were going for a walk through the for one of their last looks at its beauty.

“I have always dreamt of having our ceremony here in this forest,” Ditty said sadly. “I know that is not possible now, but it still makes me sad.”

“Don’t worry, Ditty. We will be in our soon and you will be surprised how lovely it is. Just wait and see. I had the strangest feeling when Squeeky and I went there a few days ago. It was like everything was going to be all right. Actually, more than all right. I can’t explain it. Anyway, I promise as soon as everyone is safe and out of danger, we will have our ceremony there.”

“You know what luck it brings companions if they have their ceremony on the solstice. Do you think we can still have it then?”

“I will do everything in my power to make it happen then,” Peppercorn replied, as he gave Ditty a big hug.

The two did not realize it, but they had company. They were talking and not paying much attention to things when suddenly a rope was around Ditty. Before she knew it she was being tied to a tree and Peppercorn tied sideways to a pole.

“What are you doing? asked Peppercorn, hanging from the pole with his arms and legs tied around it.

“We are taking you to Sourgum. He wants to know about all this mountain business,” answered Wrong Wing.

“If you will let me loose I would be happy to walk.”

“Oh, no, I’m not stupid. If I let you go, you’d scurry up a Bar-Roo tree and I would not get to take you to Sourgum. I can’t have any mistakes.”

A place which may-

Or may not be.

Meant for just your eyes to see

and live within your memory.

There are seven Bar-Roo Forests on Earth, two are in the state of , on and . Mana planted them all. He came from the planet Anon, a planet of volcanoes. Mana was the hope of his world. His quest was to find a new home for the Hibble Gibbles, a race of creatures very friendly and hairy with feet that are at least 2 feet long. Mana’s favorite forest was the one on . This is where he chose to live his Earth life. There is great magic in the , everyone speaks the same language. Much of the magic is more of a feeling that the trees are listening to everything. Share the adventure of the Hibble Gibbles as they find a new home, outsmart their enemies the Giant Termites, face the eruption of and find out the Secret of the .

Fran Curtin Gieseke was raised in a small town in southwest where she discovered a passion and respect for nature. She was able to merge fact and fiction following the events of , and create a new world of nature and fantasy. In this, her first in a series of books for children, she takes the reader on a grand adventure in a beautiful place. Fran wants to show children the magic that can live in the natural world and the trials that the Earth presents us with.

Fran currently lives in Tacoma and Morton, Washington with her husband of 33 years. She has two daughters and two grandchildren. Fran looks forward to the completion and publication of this series.