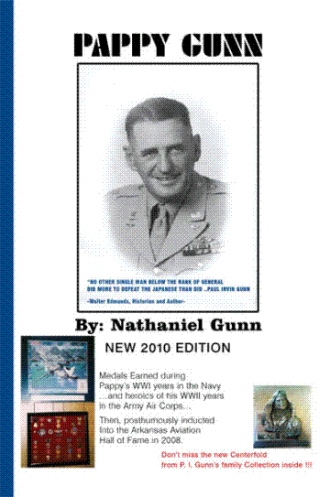 Over the years and after World War II in the Pacific, Paul Irvin “Pappy” Gunn,  a legendary pilot, mechanical genius, father and husband with, more than a mission to help win the war, was extolled in books, magazine and articles galore by people who knew, or purported to know, a portion of what this man was all about.

I have had the honor of being in the “personal” front lines of this remarkable man’s life and career as his youngest son, who shared a love of flying at six and knew the personal side of what a heroic, though contradictory, man he really was.  This story will be a labor of love and tears, but also laughter and grandeur, being his son and sharing in many of the stories both told and witnessed.

This “PERSONAL STORY” will put to bed many of the myths and twisted assumptions to make the “myths” seem tame.

His rise from the tiny town of , in the poorest of fashion, to an unplanned venture into the Navy, P.I. (Pappy) found his calling by working on the Navy planes and earned his way through the ranks, to a retirement in as Operational Manager for Hawaiian airlines.

His sudden opportunity to start up the Philippine Airlines (PAL) as a partner was too good to be true for a young “really poor” man from .  So off he went with his beautiful wife and four children for the adventure of his life.

That, unfortunately, was the year 1939.  Two years later came .  I could say the rest is history…..  But no, history forgot many of the facts about this unbelievably courageous man and what he sacrificed.  Firstly, providing some of the only aircraft left in the after the bombing and rape from .

I was 11 years old and I haven’t forgotten.  And the details still burn my memory as duty to country came first, “Pappy” joined the only air force available -- the U. S. Army Air Corps.  He was immediately ordered to fly out some of the dignitaries and his family was left behind as was declared an “Open City.”

This predicament of his family interned in a Japanese Prison Camp while he is embroiled in the Pacific Air War …. With no wish of any publicity for fear of retribution to his family, a new twist to his determined spirit arose to do more, win more, fly more and accomplish more …… to the long remembered success of the flying machines during that period and the undying admiration of his peers and many others.

In this book I wish to join the two - personal and heroic - because they belong together and this book will, I hope, thrill you to the fact that we have had a man so courageous among us at a time when we needed him most.

This is the untold “Personal Story” of a man whose story has not always been correctly told.  Therefore, combining my recollections &#8230and many others’ recollections passed to me personally through various people involved …. And, hours of painstaking research through military fact finding … and to the best and most loving thought -

I want to give an honest account of the man I knew as “Daddy.” 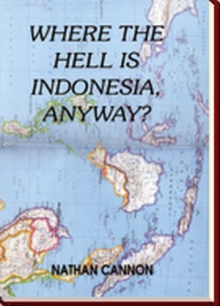 WHERE THE HELL IS INDONESIA, ANYWAY?
NATHAN CANNON
$24.95

The name--..oft heard and heralded during and after World War II

ordinarily speaks for itself----------------------------however in this book, the unforgettable, untold to this day, human story of the legendary “Pappy Gunn,” hero of the Pacific Air War and to his family who knew and loved him ------.this story is told with the understanding of one who had the foreknowledge and burning determination to sort out the facts and myths about him, Nathaniel Gunn, the author, fellow lover of flying, and his youngest son, who was with him until his untimely crash in Civilian life doing what he loved to do - flying, flying, flying!!

You’ll find the story intriguing in its discoveries, packed with Pappy’s own personal original files, long forgotten letters, documents and photographs spanning Pappy’s youth into the U.S. Navy, marriage, retirement in and move to the Philippine Islands.  Then, the untimely entrance of the in the WWII bombing and capture of .   Most of all, this story draws a perceptive focus on --.the man----as the person and courageous patriot he truly was, joining the U. S.Air Force he was at this time--.

Fighting 3 wars at once

Thank God - his was a triumphant battle in all three!!!!

Nathaniel Irvin Gunn, was born on in Washington, D. C.  Interestingly enough, instead of a midwife, his own father helped to deliver him.

At eleven years old, Nathaniel and his family lived through the horrors of World War II in a Japanese Prison Camp for three long years.  His father, fortunately or unfortunately, was called into the military  battling his own three wars to free them.

Nathaniel’s early life was in the sunlight and shadow of his father, Paul I. “Pappy’ Gunn.

His own personality and love of adventure and flying in a different context, left an impression on Nathaniel and a unyielding desire to give his father this tribute only he could relate.  His writing abilities put to the ultimate test, he hopes the reader will find the story one long overdue and an enduring part of history it should be.

Nathaniel was educated in the Philippine Islands after the war by his own choice where he was given an insight into more than the everyday events that shaped not only their family life but, also, the underworkings of governmental decisions that sometimes shaped countries and world politics.