Holy Secrets, Holy Lies: The Shocking Story of Sexual Corruption and Abuse of Power Inside the Catholic Church 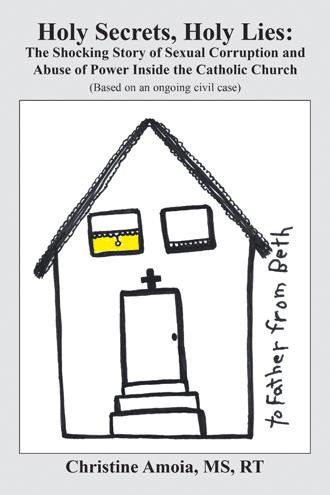 This story attempts to alert unsuspecting individuals to the dangers of abuse by a power figure; in this particular story, a cleric.  An offender can be anyone in our society... but the one thing he has in common with other predators is that he is capable of gaining the trust of his victims.  This is also a story about secrets; secrets kept by the offender, secrets kept by the Church that employed him and secrets kept by his victims.  This book has been written to stop all the secret keeping and to stop this particular man and other perpetrators from committing crimes against the innocent, for all time.  Once victims learn to recognize the predator’s methods, he cannot hurt them any longer.  In this particular case, the Church can no longer keep his secrets and protect him, along with their guarded reputations.  Victims can then begin to feel free to share with others, all that they have endured.  And why? Because there are no more secrets being kept by anyone, anymore, anywhere.  No more secrets, no more lies!

After interviewing several victims, including members of the offender’s family, the author felt compelled to share this story with anyone interested in saving others from the same fate.  The facts are true.  Names and locales have been changed to protect the privacy and well-being of only the victims.  Please note, that this book is not intended to condemn all Catholic priests.  There are good men in the world who are called to the priesthood and live out their vocations to the best of their ability.  It is to these courageous men that the author sincerely sends out words of thanks and praise.  Their holy vision, coupled with their blameless lives, and her faith in an all-knowing God, compels her to remain a practicing and practical Catholic with devotion to the tenets of the true faith.  The author is also careful to remind the reader that true faith is extraneous to the concept of church buildings and hierarchy.  It resides in the soul.

Chotahari Dasa offers her views, regarding comments made by writer W. L. Hamilton in her text entitiled, “Without Conscience”. She quotes this author:

There are more psychopaths pretending to be saints today, than there are real saints! A saint will help you to find true spiritual enlightenment.  If your teacher is a psychopath, you run the risk of being abused spiritually, emotionally, mentally, sexually or financially.  You may find yourself losing your job, your ability to work, your family, or your sanity.  Then, the ultimate danger is eventual disillusionment with further spiritual quests.

This story describes a psychopath who posed as a saint.  He left in his wake, countless souls adrift in a sea of doubt, pain and despair.  He also left them with broken dreams and depleted bank accounts.  He broke up marriages, families and friendships in order to maintain stifling control over his victims.  He doesn’t deserve the name of priest.  He doesn’t deserve the name of Father.  What he does deserve... is a jail cell!

The cover graphic of the book was inspired by the story’s youngest Houser child, whose family adopted the priest as one of their own.  Beth, as she is called in the book, was always drawing simple pictures.  She gave one similar to the one on the book’s cover to Fr. Flynn as a Christmas present in 1989.  He placed it with his growing collection.  Years later, it was discovered among his personal affects while he was being sent to another parish after molestation charges were made against him.  The lit bedroom window has been added for effect.  It is a haunting symbol of what Beth and the other characters/victims went through at the hands of a serial predator, in a place that should have been safe for everyone: a church rectory.  This author hopes that all who have suffered abuse of any kind come to realize their true beauty as reflected in the eyes of God.  And may they eventually come to a place in their lives, where they will forever be safe from harm and evil.  The author now urges you the reader, to read and beware!!

Who would have believed them?  Who would have understood?  Only ones who lived this nightmare could have comprehended all that it was... to be lured and trapped within the web of holy secrets... holy lies!

Pamela Luchese was a loving, trusting individual She was also naive.  She gave an individual, who was in a powerful position, too much control and ultimately set herself up for heartache, abuse and loss.  That is what happened to countless others, whose lives Father Flynn touched.  They all allowed the better part of their reasoning to be seduced and manipulated by a monster who was a master of deception.  And why?  Because, as Judge Jim Cowell, tells Pamela in the Epilogue, “They couldn’t see him coming”.  Unfortunately, Pamela wasn’t aware of the phenomenon at the time.  Having a preconditioned opinion of an individual... this individual... she could only see only what she was groomed to see and then rationalized e

They couldn’t see him coming! This statement best describes how a psychopath successfully targeted, tested, disarmed, groomed and isolated his victims for years without being exposed. Father Flynn was outwardly known by most in his diocese, as a modern- day saint but inwardly, he was really a wolf in shepherd’s clothing! He told his followers that he was a psychiatrist, medical doctor and chiropractor; all the essentials for gaining the trust of people who respected and revered him. He was sought out by thousands and especially by those who attended his weekly bible study classes. The consensus was that Father Flynn could do no wrong...or could he??? What his victims sadly came to discover was that this “saint” was hiding in plain sight! His conservative cassock, attitudes and mannerisms conveyed the idea of holiness to all. But then a disclosure that took place in 1999, revealed the news to his shocked parish: He used his 30 year ruse to get at what he really desired: sex, power and control over others. The one thing that this predator didn’t count on was the force for good that resided in one of his victims: Pamela Luchese. After 13 years of being oppressed, abused and isolated, she discovered the horrible truth about her best friend and spiritual director. Read her story and learn how she finally stands up and screams, “Enough!” to him, to the Catholic Church and to the hierarchy that hid his shocking secrets and enabled his deviant lifestyle for decades. This book is a must read for those who want to understand the disturbing issue of cleric abuse from the inside-out.

Christine Amoia, the author of Holy Secrets Holy Lies; The Shocking Story of Sexual Corruption and Abuse of Power inside the Catholic Church, is currently employed as an Associate Professor of Health Sciences at a community college. She teaches courses that deal with human sexuality, deviants in society, victimization, self-help areas and victims' rights. Her book is an attempt to reach a society that exists outside her classroom walls.