The Isles of Langerhans, A Magical Kingdom, and Diabetes

A Story to Help Children Understand Diabetes and Develop the Courage to Live With it. 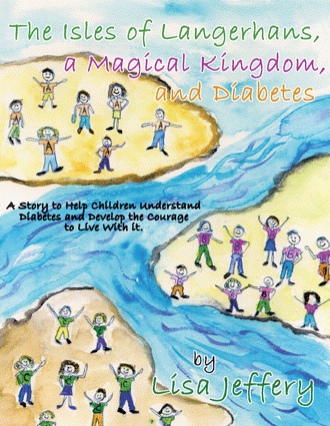 What happened to me? Why do I have to take insulin? This book is the answer to those questions. It explains diabetes to children, their friends and parents in simple, easy to understand terms. Lisa Jeffery was diagnosed with type 1 diabetes at age 35. Even with the doctors’ and nurses’ fancy explanations, Lisa still did not understand what happened to her. After being released from the hospital, she bought a suitcase full of books, and returned to South Africa, where she lived. She read them all. When she finished, she asked herself… “If diabetes is this hard for me to understand, how in the world do children understand it?” She remembered what one doctor had said, “It all started in a place called the Islets of Langerhans, ‘little islands’ in the pancreas. ”* Her imagination set sail. Lisa envisioned an island, where little people ran an insulin factory. Then one day, something went wrong and it caused all kinds of trouble in the kingdom. Someone had to save the kingdom! She grabbed her water colors and story-telling hat. Explaining complex things was nothing new for Lisa. As a U.S. Air Force Public Affairs Offi er, she learned to explain jets, the emergence of the new Air Force Space Command, and the Air Force. As a Rotary International Ambassadorial Scholar in France and Monaco, she explained international education, understanding and goodwill to large audiences -- in French. But her greatest challenge was to explain diabetes to a child. Lisa is now a healthy, happy executive speech coach and CEO at Jeffery Communications’ Speech and Accent Academy™ and is the founder of Accent Reduction Miami™. She coaches executives in public speaking, building confidence and accent reduction. She makes speeches about good communication, dealing with adversity, and living courageously with diabetes and other challenges. Lisa Jeffery lives in Miami Florida with her two African Grey parrots, Valentina and Max, who make their own very articulate speeches about papaya, peanuts and whistling taps.