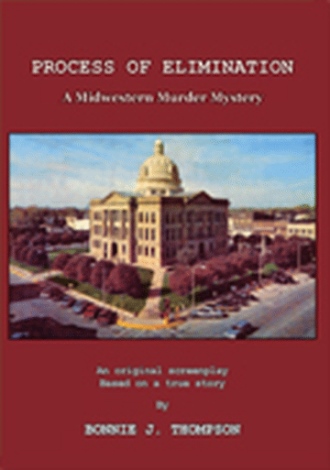 When Russell Smrekar enrolled at in 1974, the people of had no idea they were on a collision course with destiny.  Process of Elimination is based on the true story of how an expelled college student began eliminating witnesses who were to testify against him in two minor theft cases.

Smrekar, a cunning rebel from , had a history of outwitting police and dodging the legal system.  In 1976, he mystified law enforcement and used the community for his killing ground.

It appears Smrekar was responsible for four murders; however, two of the murders - the disappearances of Mike Mansfield and Ruth Martin, whose bodies have never been found - remain unsolved.

In 1976, the author, Bonnie J. Thompson, was a nineteen-year-old deputy circuit clerk in the Logan County Courthouse, and her father, Roger W. Thompson, was the State’s Attorney when Smrekar was prosecuted and convicted for the double homicide of Jay and Robin Fry.

After her father’s premature death in May of 2001, Thompson began researching the 1976 murder case files within the Logan County Courthouse.  Here for the first time in nearly three decades, she presents the factual chronology of events and introduces new information and compelling evidence never revealed in the Ruth Martin case.

“The investigations into the disappearances of Mansfield and Martin will never be dropped.” - April 1977, Roger W. Thompson, State’s Attorney.

“In Process of Elimination, Bonnie Thompson has used her father’s bull-dog tenacity in digging out and presenting the facts in this highly unusual true story.”  - John W. Foltz, former ’s Attorney of Logan County.

“Bonnie Thompson is a relentlessly persevering investigator, and she tells what she has uncovered in a fascinating tale.” - Dr. Lawrence Farwell, forensic scientist, inventor, and founder of Brain Fingerprinting Laboratories, Inc.

“Through extensive new research, Bonnie Thompson has skillfully put into screenplay form a recount of mystery and murder occurring in her hometown in 1976.” - Erik Daarstad, Cinematographer for 1968 Oscar Winning Documentary - Short Subject, “Why Man Creates”.

Bonnie J. Thompson is no stranger to the world of criminal law and courtroom drama.  Both her father, Roger W. Thompson, and her grandfather, Donald L. Thompson, were noted trial lawyers.  Her grandfather was an ’s Attorney of Cook County, Chicago, in the 1930’s.

In 1968, Roger Thompson was appointed Public Defender of Logan County, Illinois.  Shortly thereafter, he tried his first murder case defending a man, named Caesarz, who had callously murdered a woman desk clerk during an attempted robbery at the Holiday Inn in .  Bonnie remembers, “My father found it very difficult to represent Caesarz because he showed no remorse for what he’d done.  Dad went through an array of emotions...it affected him deeply.  The evidence was enormously in favor of the prosecution, so when Dad lost the case it was no surprise.  He was really very relieved when the trial ended.”

After six years as Public Defender, Roger Thompson was elected State’s Attorney of Logan County and served two terms.  Little did the Thompson family know that those years would prove to be the most challenging, rewarding, and disturbing of Roger’s legal career.

The Logan County Courthouse provided Bonnie with a very important education, for it was there that she learned the value of truth and justice and to hold steadfast to her convictions.  Although Bonnie often considered pursuing a degree in law, she found herself more interested in music, writing, and investigation.  In her spare time, she sometimes performs as a professional singer/songwriter/guitarist; she particularly enjoys singing jazz and blues standards.

Process of Elimination is Bonnie’s first published work.  She has a second completed screenplay entitled, Glass Onion, and she’s currently writing a book.