Prejudicial and Discriminatory Laws, Decisions and Policies in U. S. History 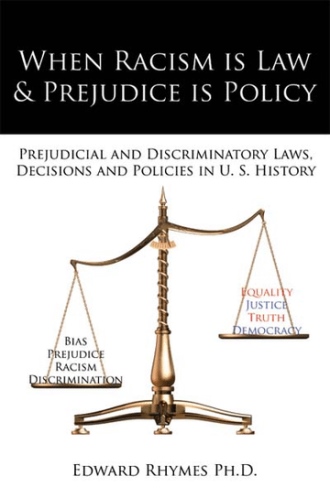 As we as a nation are beginning to grasp for some definitive meaning for the word "American," as many institutions of higher learning are beginning to offer more courses concerning race & race relations, ethnicity and culture. As many teachers on every level have started to interpret history through the clear lenses of objectivity and not through the unreliable spectacles of nationalism and prejudice, I wanted to add my voice to the massive refrain of authors who have written volumes concerning prejudice and racism.

I believe that these writers understood that for a democratic government to be guilty of injustice and inequality is not only a transgression that many other societies and governments have been guilty of, but an outright betrayal of the principles that this government was supposed to be founded upon.

There are many who may balk at the delving into the history of the political and social sins of America. They say that "those things happened a long time ago" and the examination of the past "only stirs up trouble."

I will first answer the "it happened a long time ago" argument. I agree whole heartedly with Dr. Martin Luther King Jr. when he said: "there is nothing magical in the flow of time. Time is neutral; it can be used either constructively or destructively." Many people have the erroneous belief that "time heals all wounds," but a wound without proper medical care and attention, left uncleaned, doesn’t get better over time but worse. And the infection can become deadly if the wound is serious enough.

It is what we do with time that determines its impacts and benefits. As to the statement of the examination of the past "only stirs up trouble," I say that sweeping also stirs up dirt and dust, but when all is said and done the floor should be cleaner. One should always be apprehensive of a peace that comes at the expense of the truth.

As a sociologist I have tried to view myself as a "social physician," and one the first things any physician wants to know about a patient is the medical history of their family. I have never heard of any patient telling a doctor that by doing this they would only stir up trouble. On the contrary, most (if not all) patients know that, to better serve them, the physician must be made aware of the history. That by knowing the medical history of the patient’s family a physician can not only better treat the medical problems that patient may presently have, but also what preventive measures to take as well.

I am neither naïve nor arrogant enough to believe that by the revealing of certain truths it will make justice inevitable, but it is my hope to make injustice inexcusable.

To impress upon the reader these actualities in American history and society, I endeavored to write each section with three major components in mind. First, historical overview. No law that significantly impacts a specific group in a society or country can be separated from that same group’s history within that same culture. Most important aspects of political and social history are the result of long-standing arrangements and past experiences.

Second, the social and political climate leading to the law or policy. Although, as was stated previously, the overall history of a group is indirectly connected to discriminatory laws and policies, there are also certain immediate factors that impact the passage of these same statutes (i.e. the Depression of the 1870’s and it’s relation to the Chinese Exclusion Act of 1882).

Third, the aftermath of the law and/or policy. As an educator I have witnessed a disturbing detachment and indifference concerning the very laws and policies treated in this book. I have watched students discuss these decrees as historical curiosities, while being ignorant and indifferent to their social and historical significance. To quote noted anthropologist John Henrik Clarke: "What happened 500 years ago, 50 years ago or 5 minutes ago, impacts what happens 5 minutes from now, 50 years from now and 500 years from now. All of history is a current event."

In writing this book I wanted to stay rooted in historical truth and to pontificate as little as possible. By this I do not mean to insinuate that I am without opinion on the subject of racism (I regard it as a sin and a cancer, as well as America’s greatest unresolved moral dilemma). However, in my experience, the agents of bigotry and error are not overturned by opinion, but by the truth.

With that in mind there still may be some who will view this as a scathing indictment against America. While I do not deny that the writings contained in this volume may appear to be highly critical, it is history, not I, that points the finger of rebuke.

When Racism Is Law & Prejudice Is Policy can best be described as a textbook with a conscience. In its style and structure, it effortlessly leads the reader to the historical, political and sociological water of race relations and invites them to drink. It adeptly covers the various laws, policies and decisions in U.S. History that have profoundly and negatively impacted people of color, the poor and the physically and mentally challenged. This volume crosses the various disciplines and areas of concentration: history, sociology, political science, philosophy and legal studies.

Dr. Rhymes not only paints an insightful and thought-provoking portrait of the past, but in so doing has provided an astute framework for the present and future in regard to the attitudes and philosophies that make discriminatory laws and policies not only possible but inevitable.

Dr. Edward Rhymes has come to be recognized as an international expert in the areas of Critical Race Theory, History; Race and Race Relations (as well as issues that concern today’s youth). Edward Rhymes has excelled in the fields of sociology education, theology and sports. His background in sociology and theology has given him the perfect avenues to immerse himself in his love for and interest in other cultures. He has a wonderful sensitivity to all things human and believes in the God-given dignity of all humanity.

Passionate, Dynamic, Down-to-Earth and Inspiring are just a few of the words that have been used by literally thousands of participants who have attended an Edward Rhymes lecture, seminar, workshop, or course (and by those who have read his work as well). Believing that “inspiration is just as important as information,” Dr. Rhymes is an articulate speaker and profound writer who continues to stimulate the hearts, minds and imaginations of his audiences. Dr. Rhymes is the Senior Consultant of Rhymes Consulting Services and currently resides in with his wife, Lisa Marie and is the proud father of 4 children: Serena, Clifford, Michael and Ezekiel.