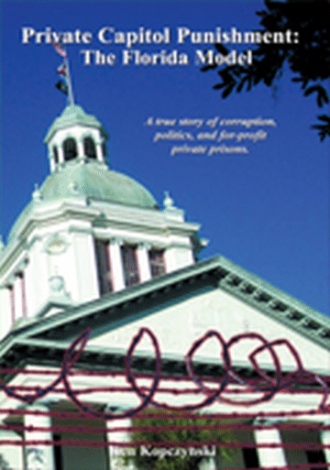 In the early 1990’s if you asked me what I thought about for-profit private prisons I’d have said, “Private prisons? You have to be kidding? Are there private prisons?” Ask anyone who is not a criminal justice researcher, prison activist or correctional officer the same question today and he or she will probably respond the same way. Private prisons are below the radar and the industry wants to keep it that way.

Private prisons and their corollary industries, private inmate transportation, private inmate food services and private inmate medical services, have been around since the 1980’s. They are a throwback to the convict lease system that developed after the Civil War.

So what’s the big deal? Who cares whether the government or a private corporation runs a prison or a jail? If a private company can run a correctional facility as well as government and for less money, then why not let them?

Private Capitol Punishment is the story of my experience into the “black hole” of prison privatization. I call it a black hole because I was pulled into the issue and have not been able to get out. I am a legislative assistant and lobbyist for the Florida Police Benevolent Association, the largest law enforcement collective bargaining agent in .

It was in this capacity that I started investigating the for-profit private prison industry in . Little did I know that my research and tenacity would lead to the largest civil penalty at that time by the Florida Commission on Ethics, the discrediting of the academic “guru” and Wall Street darling of prison privatization, the resignation of the executive director of the state agency that oversees the private prisons, and my thrust into the position as a leader in the fight against the private prison industry.

This is a true story of corruption, politics and for-profit private prisons. And it’s not just about . There are private prisons across the and the world.

Citizens need to be concerned about how the private prison industry uses overcrowding and budget shortfalls to “sell” their services, particularly with the prison population in the hovering at two million.

Citizens should be outraged that some of the same lawmakers who have drafted and passed the draconian legislation locking up more and more people, thereby creating “clients” for the industry, are members of the American Legislative Exchange Council (ALEC). ALEC is a think tank that receives funding from the for-profit private industry. Industry members have even sat on ALEC’s criminal justice committee.

It is important for public officials who might be considering the “Florida Model” for overseeing private prisons to read this book. Having an agency outside the department of corrections DOES NOT WORK.

If I do my job right this book should make you mad. It made me mad when I experienced it. Profiting from the incarceration of human beings is immoral. The Catholic Bishops of the South said it the best:

To deprive other persons of their freedom, to restrict them from contact with other human beings, to use force against them up to and including deadly force, are the most serious of acts. To delegate such acts to institutions whose success depends on the amount of profit they generate is to invite abuse and abdicate our responsibility to care for our sisters and brothers.

A true story of corruption, politics and for-profit private prisons

This must read book into prison privatization is the firsthand account of the uncovering of corruption leading to the largest civil penalty at that time by the Florida Commission on, the discrediting of the academic “guru” and Wall Street darling of prison privatization, the resignation of the executive director of the state agency that oversees the private prisons, and the authors thrust into the position as a leader in the fight against the private prison industry.

Ken Kopczynski describes in detail, backed up with copious documentation, how he unraveled the financial dealings of Dr. Charles Thomas and his relationship with the private prison industry. Follow Kopczynski as he pieces clues together exposing how the private prison industry came into being and how they used Thomas and C. Mark Hodges, Executive Director of the Florida Correctional Privatization Commission, to promote the industry.

afoul of ethics rules and who were hoisted on their own petard, it would

be interesting but not nearly as important as it is. What makes this

reveals patterns in the way that for-profit prison vendors do business."

Since 1993, Ken Kopczynski has been a Legislative and Political Affairs Assistant for the Florida Police Benevolent Association, the largest collective bargaining agent for law enforcement, correctional and correctional probation officers in . He lobbies on behalf of officers, conducts research and analysis, and provides campaign consulting. Ken is also the Executive Director for the Private Corrections Institute, established to educate the public about the for-profit private prison industry.

Ken received his Bachelor of Science degree in Political Science from the with a minor in Political Communications in 1992.  He is married to Dr. Penelope Kirby, an assistant professor of mathematics at .  They have two children, Tristan and Katriana, a dog, a hamster, and a house full of cats.

Ken is an artist who paints, sculpts and makes jewelry. He also likes to play the piano and guitar whenever he can.