A BURDEN OF SILENCE

My Mother's Battle with AIDS

by Nancy A. Draper 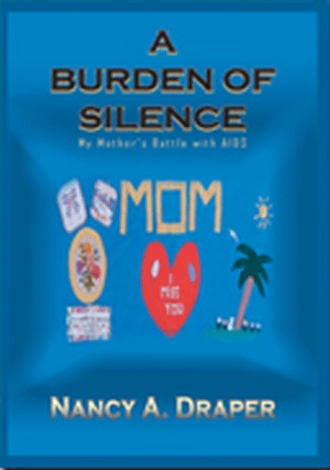 “This has to remain a secret, ,” my father whispers as he sits in our pine rocking chair with a somber expression on his face. My inner voice tells me he is about to reveal

ominous news. I have just come home from my yoga class and was surprised to see Dad’s car in our driveway so late in the evening. I am worried about my mother.

“What secret, Dad? Why are you here alone? Is Mom okay?” I ask nervously.

Mom had been released from the hospital three weeks ago with no concrete diagnosis from her doctors. They were baffled by her condition. For the past few years she had been suffering with fevers, night sweats, swollen glands, and a lingering cough. I suspect his news relates to her health.

Obviously distressed, he looks at my husband, Floyd and me as we sit on the couch waiting for him to reveal this secret.

“I’m sorry to visit so late, but Mom and I have been stressed all week waiting for the results of a blood test.”

“What kind of blood test?”

“What? Why would he want her tested for HIV infection?”

“After examining her medical records, he discovered Mom was transfused with four units of blood during her heart bypass surgery. They were traced to where AIDS is becoming a raging epidemic. Dr. Willet is suspicious that she might have been infected with contaminated blood,” he explains as Floyd holds my hand in support. “He’s checking into it now. Mom and I were both hesitant to tell you sooner because we didn’t want you to worry,” he said, his voice quivering. “Mom was scared to take the HIV test, but she knew it was necessary to determine if she is HIV infected.”

I feel like a sledge hammer is slamming against my chest. Stunned by Dad’s words, I sip a drink of juice from the glass Floyd brings me to help calm me. As Dad continues to talk, I attempt to mask my fear. My throat is tense and my heart is racing as if I were running a marathon. I have to remain calm. I can’t upset Dad. He is grief-stricken and worried about the test results. If she is infected, he could be carrying the deadly virus himself. I’m sure he has already thought of that possibility.

“When will they notify her of the test results?” I ask anxiously.

“The doctor’s office should be calling any day now. We just sit by the phone and wait,” Dad replies as he continues to lean towards us, talking quietly, not wanting his grandsons who were upstairs to hear our conversation.

“Dr. Willet said it would take at least another week before we know for certain. If the ELISA test proves positive, they’ll perform the Western Blot test to confirm the diagnosis.”

The possibility that Mom could have been infected with HIV contaminated blood during her heart bypass operation in 1983 was horrifying. A sense of rage permeated my body. People who had been diagnosed as HIV eventually died from AIDS when their immune system could no longer fight off infections.

It had been five years since Mom had her surgery. Now, in September of 1988, doctors were questioning whether the blood she had received was infected with HIV.

“I don’t understand. I thought the blood banks were supposed to notify an individual if they might have been infected through a blood transfusion.”

A Burden of Silence:  My Mother’s Battle with AIDS, is a heartwarming story of an affectionate bond between a daughter and her sixty-six year old mother who was transfused with HIV positive blood during heart bypass surgery. It will evoke emotions of faith, inspiration, anger, and overwhelming love. The reader will also smile at the funny, tender moments that Ms. Draper writes about in her story.

“This is a devoted daughter’s story of her elderly mother’s painful and lonely journey through AIDS. Because her mother was not part of a so-called AIDS risk group, she felt ignored, rejected, stigmatized, and ashamed. For years, she suffered in excruciating silence. has given her mother’s story a voice. There are lessons for everyone in this book—lessons about acceptance, compassion, and forgiveness.”
-Ann Webster, Ph.D., director, HIV/AIDS Program, Mind/Body Institute,

“Nancy Draper has written a tender account of a daughter’s devotion to her dying mother. This story about a grandmother who developed AIDS from a contaminated blood transfusion, will inspire admiration for Ms. Draper’s courage and persistence. It will also inspire rage against the blood banks that failed to screen blood donations adequately.”

“This book is a must read—It teaches us about the importance of embracing AIDS patients as human beings. We need to provide them with compassion and empathy instead of treating them as if they were “dirty” untouchable, unworthy people. In the end, I believe it is people like ’s mother teaching us about love and acceptance. Hopefully, her dying in silence will wake us up!”

Nancy A. Draper has been writing inspirational stories for the past 23 years.  She has been published in magazines in the , , and .  After receiving her B.S. degree in Education from Keene State College, she taught elementary school for several years.  For the past 24 years, she has taught piano to children and adults.  She has spoken professionally about her stories, and how she overcame adversity in her life.  Her hobbies and interests include playing piano, writing, holistic health, kayaking, yoga, and traveling throughout the and .  She and her husband enjoy their summers at the home, swimming, kayaking, and canoeing. Nancy and her husband live in .  They have two adult sons.