WHAT'S KILLING YOU AND WHAT TO DO ABOUT IT! 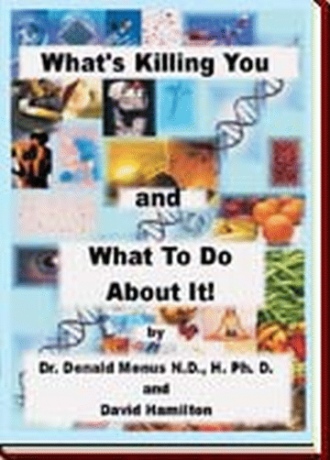 We have become a society on drugs. We’re not talking about the illegal kind like cocaine or heroin, although they are a serious problem, we’re talking about every item sitting in your medicine cabinet or on the shelf in the drug store or Health and Beauty section of any department or grocery store.

In the early part of the 20th century, medicines were taken much more seriously than they are today. Then, about the most powerful thing you could get from your druggist without a prescription, was aspirin. It’s almost as though we’ve forgotten how important it is to look at medications seriously.

Have you watched any TV commercials lately? You can barely go an hour without some drug being advertised that you should “ask your doctor about.” Many of these drug advertisements don’t even tell you what the drug is for, yet they are telling you to ask your doctor about it! What’s even worse is listening to the side effects of these drugs. Usually the ‘common’ side effects are, diarrhea, nausea, headache, loss of appetite, fatigue, sexual side effects and in rare cases, bleeding without warning.

Now let’s be realistic here. After listening to something like this, why would anyone even bother to ask about these drugs, let alone take them? Especially the ones that don’t even list the condition they are supposed to treat! From the sound of the side effects, some are worse then the diseases they are supposed to cure!

The worst thing that’s happened in recent years is a proliferation of every kind of medicine imaginable. Many of the former prescription drugs have been reduced in strength so they can be bought over the counter without a prescription. When you think about that, it’s crazy.

As a society, we’ve been watching TV and trying to fit our symptoms to some drug on the shelf so we can be cured overnight. As a result, slowly but surely, we’ve been taking more and more medications for every little thing. Our bodies get so used to having support from these drugs that they don’t want to do any work for themselves anymore. Now you might think that isn’t such a bad thing. After all, you can just keep taking cold medication, for example, when you’re sick and there’s no problem with that. But there is a problem.

Parasites are everywhere. Pretty much everyone has them and you can’t avoid them no matter how you live or what you do. How do we know this? Simple. When volunteers come to us, we look at their blood in a microscope. We don’t send it off to some lab; we actually look at it. Then, after we look at it, we let the volunteer look at it and tell them what they are looking at. If you want to see an impact on someone who you are trying to teach to live healthier, have that person look at a sample of his or her own blood in a 15,000 power microscope. It gets their attention.

In almost every case we have studied, we have found one or more parasites present in the blood. Now don’t let anyone kid you about parasites being harmless. Most of all, don’t fall for the “everyone has them” statement. While there are a slight few nematodes that are beneficial because they produce enzymatic reactions within the intestines, most parasites are just that, parasites. We have heard all the statements from medical experts about how everyone has them and they are nothing to worry about, blah, blah, blah, but that’s only true in the slight few beneficial parasites that are obtained through eating fresh, organic fruits and vegetables. The rest of them cause very serious damage inside of us.

Why do you think they call them parasites? A parasite needs a host to live on. Without a host, they die. This means they must eat the host to live. Got your attention yet? Put simply, when you have them, parasites eat you from the inside out. The trick in helping yourself is not avoiding them, because you simply can’t do that. The trick is in knowing how to manage them and stop them from doing too much damage when you pick them up. The diets and maintenance programs listed later in this book will help you keep them at bay.

Did you know that wherever you are, there’s a good chance you are near at least 3 everyday items that are slowly killing you?

Based on over 20 years of Naturopathic research, Dr. Donald Monus and author David Hamilton have created a powerful life-saving book, proving that serious diseases are often caused by our modern way of life.

Working with volunteers, Dr. Monus has taught countless people how to live their lives differently to improve their health. Whether these changes involve diet, lifestyles or attitudes, one thing is certain; they work!

Many volunteers have proven to themselves that simply changing their lifestyles can reverse chronic, life-threatening diseases!

Without a doubt, the information in this book could save your life.

Your alarm clock could be slowly killing your immune system every night!

Your pet could be introducing dangerous parasites into your bloodstream!

Why you should eliminate all processed sugar from your diet now. Not tomorrow, not in a week but NOW!

In addition to learning about what’s killing you, you’ll also learn about changes you can make to produce a dramatic difference in your life.

Can afford to wait one more day while your health slowly deteriorates?

Dr. Donald Monus is a biochemical inventor and disease researcher with over 20 years of experience in all forms of disease and natural cures. His work has earned him a place in the international publication of Who’s Who in .

Dr. Monus earned his Naturopathy degree and Ph. D. in 1998. His honorary Ph. D. was granted from the Elizabeth Glazer Science Foundation.