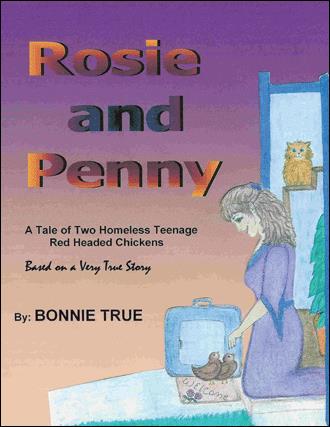 What do you do when you find two young chickens squawking on your front doorstep one evening?  Well, you try making a home for them, that's what you do!  But as this delightful tale unfolds, we soon learn this is not such an easy task when you live in a big city.  This captivating adventure is about ROSIE AND PENNY, A Tale of Two Homeless Teenage Redheaded Chickens that just happened to appear on the author's front doorstep early one evening.

Her search for an appropriate home for her two "girls" is both educational and inspiring.  Children will learn a deep understanding of animals, the "pecking order" in their environment, and how important it is to treat all animals, big and small in a loving and respectful manner.

The illustrations and photographs will delight children of all ages. Ms. True also created the enchanting Heaven on Earth Game which sets young readers on their own adventure; the object is to find, color and list all 85 animals including a very tiny ladybug.

This book is a wonderful addition to your child's library and will be read many times and shared with their friends.  ROSIE AND PENNY is a totally charming adventure for all young readers.

Born in , Bonnie moved to a dairy farm in upstate NY with her parents when she was 3 years old. She learned to milk cows, feed chickens and ducks, and fell in love with every animal on the farm, including the salamanders.

The family later moved to Orange County California just in time to watch being built. She grew up, married, had a son, worked as an extra in the movie industry, and is now in sales.

When her beloved father died, Bonnie was overcome with grief.  With the discovery of "Rosie and Penny" on her front doorstep two months to the day of his death, the family saw this as a gift from her father and God to bring her out of her depression.  He knew that she would be so busy with those chickens, there would not be time to grieve.  Finding the proper home for "Rosie and Penny" became one of her most important goals, because her father had taught his family to love and respect all animals.

It was then she realized these two little chickens had probably been given to city children as Easter or Birthday gifts.  When the chicks "grew up", the children tired of them and just abandoned them by dropping them off in her neighborhood. That is when she decided to write this story as a children's book.  Bonnie thought about her readers and how they might not know how to take care of animals, as she had growing up on a farm.

Parents reading this wonderful book will find this a creative tool to inspire in their children a deep appreciation of all of God's creatures. ROSIE AND PENNY is a truly inspiring story of one woman's quest to educate young readers while she is finding a proper new home for her two precious friends.

Bonnie loves the Lord, her family and friends, and all children. She still has many pets, including cats, (who think they are human), large goldfish who swim in her pond with a very special turtle named Biff.