In Clouds of Fire

a story of community 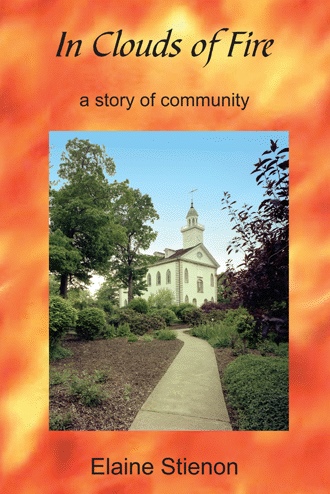 He saddles and bridles the mare.  What else to take?  He moves a board to get at the well.  He finds a canteen and fills it.

Silence lies everywhere.  He doesn’t want to make any noise, fearful of what it might attract.  He can see nothing alive...pigs, chickens, geese have all disappeared.

He mounts and rides past the cabin he built for Hannah.  A smoking ruin.  He looks at it, and a sob comes from deep in his chest.  His eyes flood with moisture.  He brushes the sleeve of his nightshirt across his face.

They head north along the road.  He doesn’t feel safe on the road, but he doesn’t want to miss his parents either.  Maybe the raiders have quit for awhile.  He passes two burned cabins, the first completely destroyed.  A family with six children lived there yesterday...where are they now?

A lone pig trots out and looks at him.  He dismounts and tries to catch the animal...he can carry it in his arms.  But the pig refuses to be caught.  Dan mounts again and clicks to the horse.

He thinks he hears distant shots, the sounds of a battle.  He didn’t think to search for a weapon.  He feels sleepy, disoriented, too dazed for any fight.  But a terrible, righteous anger is building inside him.  How dare they do this to his people, his family?  How dare they destroy the things he has so carefully built?  The cabin for Hannah, even the crops...he trembles with rage.

The sound of horses?  A cry for help?  He urges the mare over the next hill.  Off to the left, he sees four men standing near a tree, two others on horseback.

Then he gasps.  A seventh person, a young black man, is tied to the tree.  His hands are bound with ropes, and another man is beating him with a stick.  The stick makes a cracking sound as it descends.  The bound man cries out.

Without thinking, Dan gallops toward them.  They look up.  The beaten man glances around in wonder.

The man wielding the stick has a familiar look...narrow eyes close together, with an impression of emptiness.  Dan recognizes the lean-faced man who had beaten him last July.

“Why are you beating him?”

“It’s none of your business,” another man says.

“He stole a chicken!” yells a man on horseback.

The lean-faced man spits, then raises the stick.  “He needs to be taught obedience.”

The lean-faced man looks puzzled, then grins.  “I’ll be dad-blamed.  Here’s a blasted Mormonite trying to tell us what to do.”

Dan rides up to the slave.  He grasps the knife he carries on his saddle and reaches down to cut the rope.  He leans over too far...he feels himself slipping from the saddle.  The severed rope dangles from the slave’s wrists.

“Nab him!” the lean-faced man says.

To Dan’s surprise, the slave lunges out and grips his arm.  The knife falls to the ground.

Before Dan can get to his feet, the others surround him. 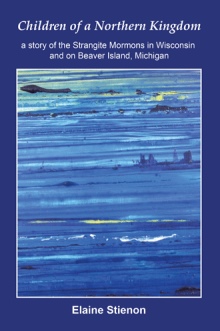 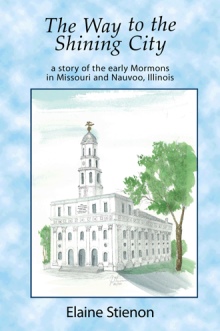 The Way to the Shining City
Elaine Stienon
$15.19

Love, violence, and death on the American frontier play a part in this story of the early Mormons and their search for peace and freedom from persecution.  Nathaniel, a young man from a Shaker background, has promised to help Hannah and her brother get safely from to , where her fiancé Dan is building a cabin for them.  Despite his determination to assist, Nathaniel finds himself falling in love with Hannah.  How can he hand her over to Dan and never see her again?  His dilemma is made worse by the journey’s trials and the threat of persecution.

In Clouds of Fire also explores the diversity of people who were attracted to this new, unique religion, and the groups from which they came,  religious and otherwise.  Some came from a Huguenot background, one from the French settlement at , some from the group known as “Seekers.”  One is an ex-slave.  All these people combine to form a family group within the greater community, where they face the realities of persecution and sacrifice in order to stay together.  Based on accounts and journals of the time, the book brings to life an exciting portion of American history.

Elaine Stienon grew up in , and attended the , where she majored in English and American literature.  In her senior year she won a Hopwood award (a prize in creative writing) for a collection of short stories.

Since that time, she has had stories published in literary magazines such as , South, the Cimarron Review, and the Forum.  In Clouds of Fire is her fourth published novel.

She has had a life-long interest in history, especially the history of the early Mormons and the difficulties they experienced on the American frontier.  She lives in , where she devotes her time to writing and teaching.