Adventures In Our New Town 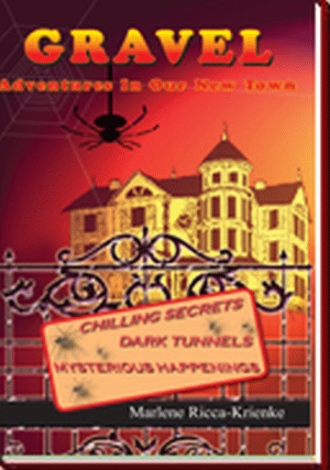 Oh man! My window looked right down on the graveyard! I started washing the window as fast as I could! I was really scared. Tomorrow I was going to make sure Mom put some real heavy curtains on the window so I wouldn’t have to see the graveyard all the time.

I was just finishing the window when something in the graveyard started to move! It looked something like a man, but not quite like a man. I didn’t know what it was. I fell to the floor really fast so whatever it was couldn’t see me. My heart was beating so, that I felt like my heart would beat clear through my chest, and I was really shaking. After awhile I took a chance and I peeked out. It was gone! I tried to start to be not so scared. I thought, “Hey, everyone in the graveyard is dead! It was probably some kind of animal.”

After a lot of talking myself into thinking it was an animal of some kind, I left my room feeling a little bit better and made up my mind not to tell anyone what I had seen ‘cause they would just laugh at me again. I decided to do all my exploring and investigating on my own. It would be more fun that way, to have secrets that not even Justin and Jimmy knew about.

I quietly slipped out of my sleeping bag and went up to my room. I took my flashlight with me and opened the little door. Sure enough there were the stairs I had seen yesterday. I decided I had to see where they led to, and I wanted to go down the “down” steps first ‘cause I thought they would lead into the basement. Maybe then I could find out what had scared me so badly. I am not a real brave guy but I really like to know stuff that my brothers and sister don’t. You know, secrets and stuff like that. It makes me feel more important and bigger to know I know something they don’t know about.

So I stepped into a kind of tunnel where the stairs were, being careful to close the little door behind me so no one would know about my secret. I turned the flashlight on and started looking around. There were cobwebs everywhere. Some hanging down so low they got in my hair and on my clothes. YUCK, what a creepy feeling! I was glad I put on my jacket. It was real cold and clammy in here. The walls were just dirt and cobwebs and no lights anywhere. Gosh, I hoped my flashlight stayed on!

I looked at the steps to see if they were rotten. I didn’t want to fall, and then I felt that old scare again. Everything was really dusty except for footprints in the middle of the steps. I knew then that I was not alone, and someone else used the secret stairs!

As I stood there looking at the rain, I saw lightning in the graveyard. But there was no thunder, and the light just stayed on.  My flashlight! It was my flashlight! But how could that be? I knew when I went down the stairs and into the tunnel that the batteries were old and wouldn’t last long. How could the flashlight still be on after all day?

Since now I knew where my flashlight was, I had to go and get it before someone else in my family saw it and started asking me questions. I didn’t want to give up my secrets just yet. But I also knew it was too dangerous to go out into the bad weather now. I would just have to get up early in the morning before anyone else got up and go over and get it. I just hoped my brothers wouldn’t wake up and follow me.

I was just turning around to get back into my sleeping bag, when a big lightning bolt lit up the graveyard and once more there was that black thing running between the tombstones!

“Who or what is it?” I asked myself over and over.

This time though, seeing the black thing didn’t scare me. I just wanted to find out what or who it was, and I felt a little sad for the black thing for having to be out in the rain. As I crawled into my sleeping bag feeling the comfort of the warm fire, I was determined to find out about it . . . and soon.

After dinner was over, I was helping Janie do the dishes when I heard Justin yelling.  Janie and I

Here is a glimpse into the life of a nine-year-old who is experiencing all the joys and trials of growing up in a family of two loving and wise parents, two mischievous twin brothers, and one (yuck!) older sister. He has quite a thrilling story, and is eagerly relating his adventures, trusting you will share his feelings as each one of his secrets becomes discovered, investigated, and finally revealed:  Mysteries that have come into his life since his family moved to their new home in the town of .

Johnny is torn between the excitement of possessing his special secrets, versus the guilt brought on by all the lying necessary to keep them from becoming known. Even so, he still enjoys the fact that the secrets are his alone (at least in the beginning), and he believes he must protect them, no matter what.

It is apparent the author has a true love for children and their growth, especially morally and spiritually, as she openly conceals time-honored character-building truths within the story. Johnny learns how to consider the thoughts and feelings of others, and the meaning of "trust".

Be aware that Johnny uses his own childlike version of the English language to tell his tale. Allowing that, this simple and suspenseful narrative offers to be a perfect leisuretime story for elementary and middle school children. Even parents are invited to return to their youth, tune in to Johnny's mind and . . . Enjoy!!!

Born Marlene Alice Ricca, she has lived in for three generations: first as an inquisitive child, then a devoted mother, and now a wise grandmother.  She has a wealth of experience and a desire to leave her progeny a legacy of family love . . . a love that is exemplified by Jesus when He said, “Let the little children come to me . . . “