Self Knowledge in Thomas Aquinas

The Angelic Doctor on the Soul's Knowledge of Itself 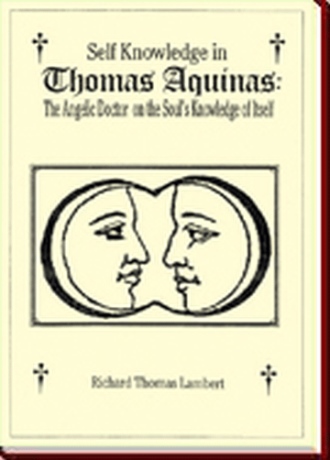 At least since the Delphic Oracle''s injunction to "Know thyself" (Gnothi seauton), and the Upanishads'' pronouncement "That art thou" (Tat tvam asi), occidental and oriental civilizations have been occupied with (or at least given lip service to) self knowledge.  This is not surprising, for both civilizations have recognized the importance of knowledge, and our very selves would seem to be natural things to want to know. Ourselves would also seem very accessible subjects of knowledge, for they are within us or simply are us.  And yet it is equally obvious that many (perhaps all) of us do not know ourselves in much depth, as shown by the ability of others to see some character traits in us long before we ourselves recognize them.  Thus self knowledge, even on a very cursory inspection, is a paradoxical combination of immediate availability and profound obscurity.

The fact that self knowledge is at once a worthy and a puzzling topic recommends the inspection of the thought of a great systematic philosopher on this subject.  Since Thomas Aquinas had penetrating, sometimes surpassing, insights on so many subjects, and since his philosophy was so systematically conceived and expressed, it is very likely that his observations concerning humans'' knowledge of themselves would be interesting and instructive.  Furthermore, such a subject was not a merely academic one for Aquinas; he lived in a spiritual age in which introspective meditation was a common religious practice, and he enjoyed a life of deep spiritual inwardness, which inevitably became expressed in his theological writings and preaching.

Aquinas''s insights could make a further contribution regarding the modern psychological notion of "the unconscious."  For one thing, Thomas clearly affirmed (as does common sense) the existence in human beings of factors of which their bearers are not themselves conscious.  Most obvious of these would be purely physical activities such as nutritive processes or (discovered after Thomas) the circulation of the blood.  Our mental faculties, considered as powers, are most of the time unknown to us; in Aquinas''s psychology, this would include the agent intellect, a faculty closely related to consciousness.  And we are not aware of habitually retained ideas while these are not actually in use.  As a second matter, the fact that "the unconscious" was unobservable would pose no problem as far as a Thomist was concerned, since none of the examples just listed above are directly perceivable, and some can only be postulated. The interesting question would seem to be a third issue: whether, among the things that operate in our minds, there could be some ideas of which we are not conscious even while they operate.  Could it be meaningfully claimed, for instance, with Freud, that a son acted a certain way toward his father because, unknown to the son before his sessions on the psychiatrist''s couch, he suffered resentment of Dad as a sexual and social rival?  Or (to use an example given by Jung) that a dissatisfied wife could unconsciously heap on her son the love which she formerly reserved for her spouse?  I would have to place Aquinas on the negative side of this issue.  For while he does not insist that every last determination of the mind be consciously recognized, apparently only strong impediments like the total suspension of consciousness (e.g. sleep) or completely absorbing distractions (like religious rapture) could prevent mental states from being known in some form.  Ordinarily, an idea could not be operating in one''s mind without one being aware of it to some degree; therefore, a mental state radically unavailable to its bearer, and discoverable only through arcane means like professional analysis, would seem impossible on Thomist premises.  It would not be excluded, however, that some people, perhaps even all people in different degrees, might sometimes form incomplete or distorted pictures of certain of their mental states.

As a general and speculative conclusion, I shall suggest that, at least on the topic of self knowledge and perhaps somewhat generally, Aquinas was consistent with four important features that have gradually evolved in thinking ov

This study concerns the position of Saint Thomas Aquinas on human self knowledge (“the soul’s knowledge of itself,” in medieval idiom).  Its main goal is to present a comprehensive account of Aquinas’s philosophy of self knowledge, by clarifying his texts on this topic and explaining why he made the claims he did.  A second objective is to situate Thomas’s position on self awareness within general world, and specific thirteenth century, traditions concerning this theme.  And a third is to apply Aquinas’s approach and insights to selected and contemporary issues that involve self knowledge, such as the alleged paradoxes of self reflection and of “unconscious awareness.”

The primary approach is that of  “critical narrative,” which attempts to understand St. Thomas’s texts by posing critical questions for them.  While this questioning may expose certain texts as equivocal or unsupported, usually Thomas emerges as coherent, reasonable, and better understood.

This work is serious scholarship that presumes reader interest in philosophical reflection and some background in medieval type thinking.  On the other hand, the book is not narrowly specialized in Aquinas or a single methodology, but includes broad reference to worldwide traditions and attempts to integrate St. Thomas’s approach into topics of contemporary interest.

Richard Thomas Lambert is Professor of Philosophy at Carroll College in Helena, Montana, where he has served since 1970.  He earned his B.A. in Philosophy at St. Bernard’s College in Rochester (NY), and a Philosophy doctorate at the University of Notre Dame.  His scholarly productions have included translations, book reviews, a newspaper column, and a wide variety of articles and papers, many of them on Saint Thomas Aquinas.  He is a member of the American Catholic Philosophical Association, and a charter member of the International Berkeley Society.  He has served as officer and national president of Delta Epsilon Sigma, an honorary society for students at Catholic colleges.  Dr. Lambert is married to Barbara Weydert Lambert, and has three children.