Memoirs of a B17 Bomber Aircraft Commander 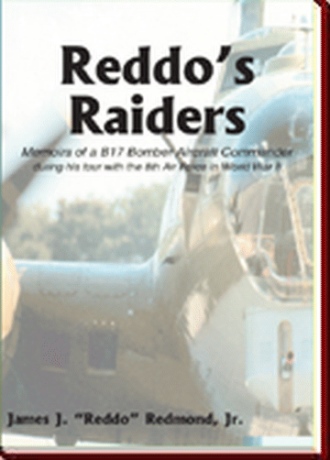 The story told here is a true recount of the life and happenings of a B-17 bomber pilot and his crew from the start of war in in 1939 to the end of hostilities.  This presentation is made in four sections, the first of which is concerned primarily with the period from September 1939 to December 1943.  This is the period during which the crew was formed, trained and made ready for combat.

The second section is devoted to combat with the Eighth Air Force in the Air Offensive over and Occupied Europe.  The material comprising this reporting was provided by diaries maintained by the author as supplemented by contributions from members of his crew.  This crew flew 34 combat missions during their membership in the 509th Squadron of the 351st Bomb Group while stationed at from December 1943 to July 1944.

The third section consists of a sequence of letters between the author and Lloyd Bogle, the crew’s radio operator.  There are about 30 letters and each brings up an instance or occurrence relating to combat and the reply comments on this and raises new issues. These letters are presented as they were written with no attempt to correct grammar or punctuation.

From my generation to yours; these are the stories of my experiences as a B-17 Bomber Pilot and my crew from the start of war in in 1939 to the end of hostilities.  The recollections from this period of my life reflect peace-time draft, war-time draft, basic training, life on base, the formation of my crew and the war itself.  This is my gift to my children, my grandchildren, great grandchildren and generations yet unborn.  History books will not present the details of the lives of the crewmen of the 351st Bomb Group and what they went through during World War II.  I feel it is an important aspect of history yet untold.  Enjoy my memories ...

When our crew “Reddo’s Raiders” completed its tour, the crew was dissolved and the members each went his separate way to whatever military program was available to him.  They were scattered to the wind, but they will never lose the close camaraderie they knew as combat crew members of “Reddo’s Raiders” through the rigors of training and the horrors of combat.  I am honored to have been able to serve as their Aircraft Commander.

On my return to the States, I was assigned to the Ferrying Division of the Air Transport Command.  My duties included such things as delivering B-25 Mitchell Bombers to the Russians at , and picking up new planes off the assembly line and delivering them wherever they were required. I also served as an instrument flying instructor of pilots returning from the Far East Theatre.

After release from active duty, I accepted a commission in the U.S. Air Force Reserve.  I remained in the Active Reserve until 1958, when the press of civilian responsibilities prevented me from attending the annual two week active duty tours and other reserve duties.

After a brief period with the Internal Revenue Service, I joined the firm “Sportservice Corporation,” now known as “Delaware North Companies” in   Sportservice or Delaware North is the world’s largest independent concessionaire functioning on an international level.  Present volume is well into the billions.  I rose to the position of Corporate Treasurer and Chief Financial Officer.  I was also a member of the board of directors.  In the mid 1960s, I resigned to move to , but at the company’s request I remained on the board of directors.

In , I accepted positions as Vice President and Cashier of The Pan American Bank of and The First State Bank of .  After half a dozen years as a banker, I resigned to start a concession business.  The business flourished and headquartered in we serviced locations as far north as and as far west as .  In the early 1990s, I sold out the business, and presently accept jobs in market research which conform to my semi-retired state.

I belong to, and attend the annual reunions of the 351st Bomb Group Association.  When the B-17 and the B-24 visit south I serve as a volunteer guide and when requested give talks at schools and other interested groups.  The highest rank I achieved was Major, and the decorations/awards I received are as follows:

I am the proud parent of one son, Seamus Redmond and two daughters, Raymonde Miano and Gladys Breese.  At this date, I have five grandchildren and four great grandchildren.