The ABC's of Widowhood 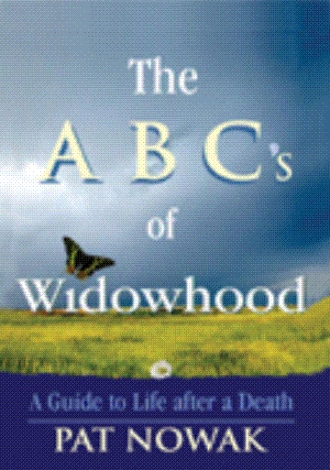 I wish there had been a primer written for widows.  There are books for children entering school, for your high school years, college manuals, and self-help novels for new moms, old moms, menopause, and everything else under the sun.  But I have read nothing that tells you what to expect when a part of your life ends.

When a spouse dies, through a process of trial and error, most women tread the tightrope of life not fully understanding all that is going on around them.  And there is really no one who can get to the depths of the pain, anger and fright. Your days are spent walking alone through a haze, not fully comprehending what you should do next and yet you must go forward.  There are arrangements to be made, family to cope with, and countless other duties that come with the new title “WIDOW”.

My widowhood came suddenly.  My husband had been sick for five years with a non-threatening illness made worse by alcohol and not taking care of himself.  After beating the alcohol addiction, our lives were sailing smoothly along.  Since both children were away at school, our routine was fairly normal.  We had come to mutually respect each other’s space and were great friends.   However, one day at 7:20 AM, I received a call telling me my husband had been killed.   He had been crossing the street when an uninsured motorist, in a hurry, ran into him and he died instantly.  I remember screaming but nothing else.  I know that someone took me to the hospital, that I did call my daughter at school, and that I enlisted her fiancée to go to my son's apartment to talk to him, as there was no answer to my phone call.

I was definitely making decisions in an out-of-body state.  It was like I was in a dream world and was just waiting to wake up.  I chose the funeral home because it was close not from any personal experience.  I was lucky, as they were wonderful. I chose the casket by its name, Titan.  My son’s high school football team was called the Titans.  My floral pieces were personal favorites and the clothes he wore were items he had just received for his 51st birthday.  However, because his family was also involved, I became overly sensitive to making everyone feel comfortable with my decisions.

The one thing I remember most vividly is waking up early the morning after his death and sitting in my family room. It was February and here in the Midwest, it was cold.  I made myself a cup of coffee and stared out at the stars.  One shot across the sky and I remember tears coming to my eyes and thinking, “What am I going to do now?  How will I get through this?"  I had two children in college and knew something about finances.  But I was not prepared for making my life’s decisions knowing that my future was riding on those decisions.

Since my husband's death was an accident, it suddenly became news and reporters, began hounding me, asking for any tidbit of information.  I gave them none.  This was a personal moment, not one to be played over and over on the six o'clock news.  The days preceding the funeral were another matter.  As the PR director for a large regional supermarket chain, I came in contact with hundreds of people on a regular basis and many were kind enough to show up at the viewing.  However, I was not prepared for the 236 floral baskets and 1500 people that stood in line to speak to me. The minutes melted into hours and I could not tell you, from one minute to the next, who was there and who was not

I chose my husband's boyhood church for his funeral services and since we were not members, I only spoke briefly to the priest.   I was amazed and gratified how eloquently he spoke about someone he had personally never met.  Our daughter recited a beautiful poem, one that she had brought back from college, filled with haunting words to a song by a local rock group.   I am sure my husband would have approved.

One morning you get a call-- your husband has been killed by an uninsured motorist.  You are instantly alone, saddled with debt, bombarded with questions, required to make decisions, and completely clueless about most of what it takes to manage personal and family affairs. And if that wasn't enough, eighteen days later your home burns to the ground, destroying the remains of your sanctuary.

If this seems like a harrowing, mind numbing situation to you, imagine how it feels to the 700,000 women, who join the existing 11.3 million over the age of 15, to become new widows each year in this country.  A few are prepared, some are able to cope, but for most, their time of personal anguish becomes a living, overwhelming hell. It needn't be that way.

The ABC's of Widowhood is a book that every woman should read before she is widowed and which every widow needs at her side when the time comes.  Written by a woman whose life was turned upside down by her husband's sudden death, it the voice of experience in an easy to read, easy to access alphabetical format. Pat Nowak, a successful public relations executive, thought she had a handle on her life. She discovered how unprepared she really was.

No widow has the time, or the inclination, to wade through the text of the numerous books out there today written by psychologists or financial writers to find the answer that she needs.  The ABC's give her direct, honest, and succinct answers.  One doesn't have to "read the book", you can simply look up the answers by topic as the questions arise.  This is not a book in the traditional sense; it is a dictionary for living.

Besides practical advice, a new widow needs solace and hope. The ABC's of Widowhood brings her that with first hand, anecdotal messages about the feelings a new widow finds herself feeling - or not feeling.  It allows her to take comfort in the fact that others have had exactly the same feelings - or lack of feelings - and that their experience is a perfectly normal part of life and the healing process.

Most women will become widows. This book can make their transition easier.

Pat Nowak is a Toledo native, one of the four daughters of Robert and Hedwig Stack.

Her career as a fashion director for two local department chains, the owner of a Public Relations firm and her subsequent position at Seaway Food Town Supermarkets have allowed her access to the highly visible world of broadcast and print media. She has been a media spokesperson for over twenty years, directed and  co-hosted a highly visible morning radio talk show, written, produced and appeared in company advertising and for televised preview shows.

Her journalism career began out of necessity. Suddenly, as new widow, fluent in writing press materials and a Lifestyles column, she searched for something readable that could help her grieving soul.  Finding great stories about personal triumph helped but there was little that addressed precisely and with clarity what every new widow faces.  Thus The ABC's of Widowhood came about, the help all women over the age of forty (widowed or not) need to get their emotional and financial worlds in balance.  The book celebrates the spirit of hope and allows a woman to discover the path to being reborn through perseverance, courage and determination.