by MALCOLM SMITH with ROBERT KRAJENKE 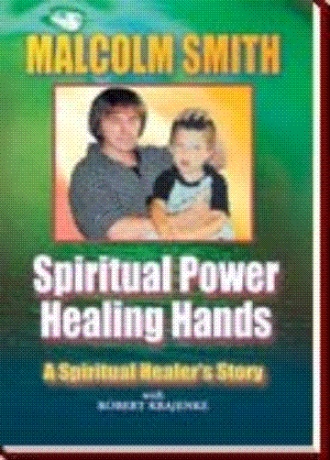 A few days after I had shaken off my illness, a gentleman who appeared to be in  his early forties approached me  one evening.  He introduced himself as Dennis Thompson , and said his wife  was dying from liver failure and had only a few weeks to live.  Mary had been a nurse at . One night, while on duty she pulled a muscle in her back while helping to lift a patient into bed. She was given a drug for the severe pain -- and suffered an almost fatal reaction. Three specialists confirmed that her liver was virtually rotting away, an effect of the drug.

No operation was possible. Nor could Mary be given any other drugs to combat the original back pain, the liver pain, or relieve the distressing side effects. The risk was too great. She was dying and suffering excruciating, unrelenting pain. The doctors recommended Mary be admitted to a hospice facility.  Dennis was a qualified male nurse. He with his three children, twenty- two year-old Karen, fifteen year-old Donna, and six year old Tracy, an adopted daughter, decided to bring Mary home to die, surrounded by those she loved.

“Mary's weight dropped from 136 pounds to 84 pounds,” Dennis said with deep concern. “She’s become so frail she can hardly bear the weight of two blankets and lacks the strength to feed herself.” It was obvious he had been under a great strain for some time. “To be honest,” he continued, “I can’t see how this healing could possibly do any good, but I promised the kids I would do whatever I could to save her. Will you see her?”.

“Yes, ” I said, feeling his anguish and despair.

The Thompsons lived just a couple of miles down the road.  I grabbed my coat off the hook and headed for their house through the dense evening fog.

Dennis greeted me somberly at the front door and took me to the stairs. "Look, she doesn't even know you are coming. I'm not even sure she's ever heard of you, does it matter?"

Even if it had mattered, it was too late to do anything about it now.  I followed him up the stairs and into the bedroom.  Mary's skin was a yellow pallor, her eyes sunk deep into the sockets, tears of pain slid down the hollows of her cheeks. She tried to raise her hand, but the effort was too much.

I put my hand gently on her forehead. "Listen  Mary, if I thought I couldn't help you, I wouldn't be here."

"Why are your hands so hot, Mr. Smith?"  Before I could explain, she turned to Dennis. "My headache!" Her voice was trembling with excitement. "It's gone!"

I felt an instant wave of gratitude, and a new flush of confidence. My hands were still on her forehead.

"Mary, now where do you feel the most pain?"  I asked.

She indicated the base of her spine and across the stomach and grimaced. "You'll not be able to do much for that. "I've had this pain every hour of every day for months."

I placed one hand at the base of her spine and the other on her tummy. She lay shaped in a deformed fetal position.

“Her spine’s locked in that shape,” Dennis said. “She can’t move without my help.  She hasn’t been able to walk or stand for weeks.”

In a few seconds the healing energies began to flow through my hands. This time it was not the great heat she had felt in her head, but intense coldness. Obviously a different form of healing power was needed for this problem. It was so cold, she said, that it was burning her, especially at the base of her spine, and in her liver area. The effect was immediate. For the first time in weeks Mary was without pain. The tears flowed again. They were tears of joy.

"Mary," I said reassuringly, "It may be true that you lost a few battles along the way, but we haven't lost the war."

I stayed with Mary until my watch showed me it was

"Be of good cheer. There are no incurable diseases," is one of the inspiring messages in this book of dramatic healing stories from the life of British born spiritual healer, Malcolm Smith.  Renown throughout England and America as an "ordinary man with an extraordinary gift," Malcolm narrates a "stranger than fiction" true life account of his more than 20 year career working in what many regard as the most controversial form of the healing arts -- spirit guided healing.

While Malcolm recounts dramatic accounts of sight and hearing restored, cancers cured and other incidents where diseases diagnosed as incurable yielded to his healing touch, he also describes with frankness and candor the emotional struggles, losses, failures and nearly fatal reversals that accompanied his decision to dedicate himself 100% to his unusual gift.

Throughout the narrative, as well as a special Question and Answer interview section, Spiritual Power, Healing Hands provides an intimate look and fascinating insights into the mysterious arena of spirit guides, angels, spontaneous healing and psychic phenomena.  While some have offered 'the power of suggestion' as the basis for his cures, Malcolm's success with healing animals, tiny babies and comatose accident victims appear to rule out "suggestion" as an explanation of his success, and imply another force, or energy, is involved. A concluding chapter of first hand testimonials provides further documentation to his remarkable gifts.

Born and raised in poverty plagued , Malcolm Smith's incredible healing hands have relieved pain, suffering and disease for thousands of people throughout and . Known as "an ordinary man with an extraordinary gift," Malcolm quit school at age 15 to work along side his father in the coal mines. In 1979, at age 33,  his life changed forever when, in a chance meeting, a spiritualist medium revealed to him that he had 'healing hands" and would have prove it to himself within three days. As predicted, three days later, his wife suffered a flare up of a chronic kidney condition which her doctors had pronounced cured. As her agony intensified and with no relief in sight, skeptical but desperate, Malcolm placed his hands on her back and her pain vanished, never to return. Malcolm kept his gift a secret, and for the next two years used it only on his wife and children until a raucous poltergeist forced him to seek help at a local Spiritualist church where he first learned of spirit healing, and his healing ministry was born.

"Healers don't heal," Malcolm states. "God does the healing."  The power that flows through Malcolm’s hands has restored sight and hearing, cured cancers and other debilitating diseases. The list of problems presented to him includes virtually every physical, emotional, mental and spiritual condition a person could suffer.  While some offer 'the power of suggestion' as the basis for his cures, Malcolm's success with healing animals, tiny babies and comatose accident victims appear to rule out "suggestion" as an explanation of his success, and imply another force, or energy, is involved.

In this first person account, Malcolm shares his incredible story of personal transformation, healing miracles, soul testing challenges and spirit guidance.  “My life has taught me that we are all capable of miracles,” Malcolm says. “The power is within us.”   The life of this ‘ordinary man”  offer a powerful testimony of the Possibility  in  all our lives.

ROBERT KRAJENKE is the author of Edgar Cayce’s Story of the Old Testament (3 volumes) and Spiritual Power Points. (ARE Press)  He is an ordained metaphysical minister, a teacher, workshop/seminar leader and director of MindSource Institute. He lives in and can be reached at info@mindsourceinstitute.com