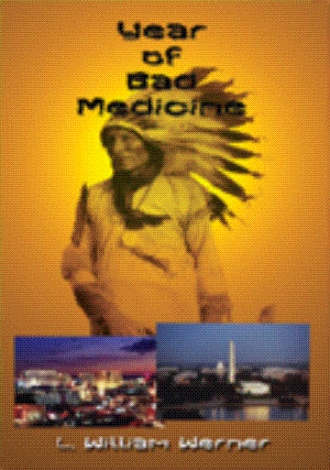 THE NEVADA DESERT is a lonely place. With the exception of the scattered mesquite bushes, Joshua trees and the occasional tortoise, the landscape appears as dead as a Martian sea. Defined by extremes, it is a no man's land of mirages on deadly summer days and winter nights, cold like the moon that casts its ghostly brilliance over the vast emptiness below. In the desert, death imitates life.

More or less, that was how Bryce Hartman, a tour flight guide and a survivor of something far worse than his stricken idealism, tried to portray his native desert in the monologue he delivered to each small planeload of tourists on the flights between Las Vegas and the Grand Canyon. Seven days a week Hartman would arrive exactly sixty minutes before the ten o'clock departure time to inspect the eight-seat aircraft, ensuring a tidy cabin for that day's passengers. The Canyon View flights departed from the Howard Hughes Terminal, built on the site of the millionaire's private airstrip, which was closed long after his keen business acumen helped put the fabulous in Fabulous Las Vegas, although not before he concluded his life as a lunatic. In a gentler era and because of his vast wealth, the press called Hughes eccentric, a kind term for a man who hid himself in a penthouse at the Desert Inn, letting his fingernails grow until they curled. For decades after he died, other than a small road, few landmarks in the city bore his name and even the holding company for his empire's assets, Howard Hughes Limited, renamed itself, as if even bawdy Las Vegas was embarrassed by his bizarre behavior. Over time, though, Hughes joined Elvis in the mystique and folklore of the city and the new executive

terminal, constructed as part of a satellite airport for McCarran International to serve private jets owned by men wealthier than even Hughes might have dreamed of being, was named after him, as was an imposing complex of office towers off Paradise Road.

Hartman enjoyed pointing out to his passengers that the city had a history of spawning fame and fortune that often turned to a pathetic end. Like the desert, Hartman routinely explained, Las Vegas was a place where life and death, as well as success and failure, were intimately intertwined, even for the rich and famous. Listening to his dramatic oratory, Bryce Hartman's passengers found him extremely likable and cheerfully entertaining. "Young man," a large woman from Omaha, with what appeared to be a pile of blue cotton candy on her head, said after one flight, "you should be on the stage!"

This particular day, the sun was illusory, as it often was during the high desert winter, glaring down deceitfully on the purplish gray mountains encircling the Las Vegas Valley but offering no warmth against a chill wind. For the first time since he took the job, Hartman was running late. This would be no ordinary tour day for him and his unsuspecting passengers, tediously dimwitted as they always were, would have no clue of what he was about to do.

The high temperature was forecast for the low 30s, so Hartman had donned his expensive new parka. It was an indulgence he allowed himself only two days earlier and which he could hardly afford with his current wages, a mere pittance of the salary he once commanded as a campaign aide to powerful Governor Logan Key. For his income, like his pride, was stripped from him a long time ago. All he now had were the one-liners and

cynical humor that sustained him in an occupation he had purposely and desperately selected to remain largely invisible and, thus, harmless, to his enemies. His fears were far from unfounded; just a day earlier he had discovered outside his apartment door another one of the anonymous and menacing newspaper clippings. The last one, which he found in his vehicle three months earlier, was about a suspected mob hit on the owner of a topless bar. The police found his head in the desert but never located the body. The recent and most chilling of all, which only Hartman and his tormentors would understand, was an innocent two-paragraph announcement in the Times metro section that the Nye County Commission had voted to approve the construction of a small runway next to the All The Way Inn brothel in Pahrump to ferry customers from Las Vegas.

Hartman didn't need these reminders to keep him silent because he had already learned the hard way that people with power will do extraordinary things to hold on to it. His potential accusations against those very same people could, at the least, provoke them to destroy his reputation, bringing shame on those he loved, and probably something worse. Only his family's stature in the Las Vegas Valley provided him protection. But after two years of living his life as all but a prisoner ( and being a very good boy in the process ( he was finally ready to do something different. Just how different that something was his captors would never imagine.

Driving down the glamorous Las Vegas Strip, Bryce Hartman is plotting revenge against his former boss, the powerful governor of Nevada.  Three thousand miles away, in Washington, D.C., Peter Holden, a two-bit lobbyist, will soon be doing the same. Long silenced by Governor Logan Key, they alone suspect the dark secret he hides, one that threatens a multimillionaire Las Vegas casino baron who will stop at nothing to protect his interests. When Albert Tom, a young Paiute Indian, discovers a body in the desert, he tells his story to reporter Mike Stanton. Now Stanton must uncover a web of deceit and murder stretching from Las Vegas to Washington, two cities where power, greed and illusion are the real games of chance.

L. William Werner has been an investigative reporter, a top United States Senate aide and an insider in the influence-peddling world in Washington, D.C. As a journalist, he appeared on ABC-TV's Nightline and in politics, he helped craft the strategy and "spin" needed to win elections. His multi-faceted career provides real-life insight for the thriller, Year of Bad Medicine, his first novel. A former resident of Las Vegas, L. William Werner currently resides with his wife and daughter in Falls Church, Virginia.