At the End of the Ages...the Abolition of Hell 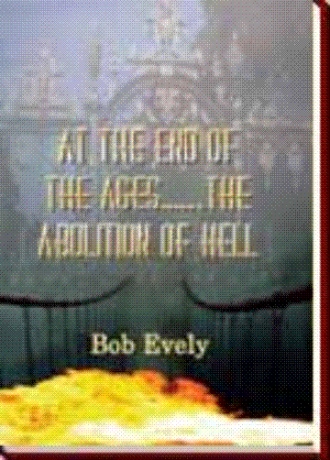 G. Campbell Morgan is one of the most well-known and respected Bible teachers and preachers in history. He worked as an associate of D. L. Moody in the Northfield Bible conferences, and he served as pastor of Westminster Chapel in London from 1904-1917 and again from 1933-1945. During his second term at Westminster Dr. D. Martyn Lloyd-Jones served as his associate.

Morgan has become known as the "Prince of Bible Expositors," and has written a host of well known and respected books. The primary focus of his ministry was the study and teaching of the Bible.

"Let me say to Bible students that we must be very careful how we use the
word ‘eternity.’ We have fallen into great error in our constant use of that word.
There is no word in the whole Book of God corresponding with our ‘eternal’
which as commonly used among us means absolutely without end. The strongest
Scripture word used with reference to the existence of God is— ‘unto the ages
of the ages,’ which does not literally mean eternally."

Mr. Morgan was a serious student of the Bible, and he served within a very "orthodox" church setting, and he continues to this day to be highly respected by preachers and scholars; yet he tells us that when we read the word "eternity" in our modern English Bibles, it is not a correct translation ... at least not as we understand the word "eternity."

While Mr. Morgan was a life-long student of the Bible, we should not take his opinion on this matter without further study. The most important thing we learn from him is that not all qualified Bible teachers are in agreement on the issue of "eternity." When I first took my stand as to the beliefs expressed in this book, I was quickly challenged and told that the Greek word "aionian" which is found throughout the New Testament means, and has always meant, "eternal." As we can see, not all studied men and women agree on this point. Many will stand up today and tell you that "aionian" must be translated "eternal." Mr. Morgan is just one example of a well studied man who would disagree.


WHAT CAN WE LEARN FROM THE BIBLE ITSELF?

You can buy a Greek study book, and depending on the author you may find that "aionian" means "eternal," or you may find that it means "age-abiding." You can read the translation of the Bible you have chosen, placing your faith in the translators ... that they got it right. You can listen to your pastor or your professor. You can read the opinions of men like G. Campbell Morgan or others who have written on the topic.

Or... you can look at the Bible and see for yourself!

You don’t need to be a Greek scholar. Read on!


INCONSISTENCIES IN THE TRANSLATIONS

In most cases our common English translators have taken the Greek word "aionian" or "aions" and translated it "eternal", "eternity", "forever", or some such word as these meaning endless. In many of these cases the word is referring to God Himself, or to "eternal life" or "eternal damnation."

But the translators encounter many difficulties, because in a fair number of cases the same word is used ("aionian" or "aion") and it cannot possibly mean endless.

To give you a quick summary, the words "aion" and "aionian" occur 199 times in the New Testament. In the King James Version the word is translated "ages" 2 times, "course" one time, "world" 43 times, and "eternal" or some variation the remaining 153 times. So in 46 of of the 199 times where we find the word "aion" or "aionian" (or 23% of the time) the King James Version recognizes that the word cannot be properly translated "eternal," since it is clearly a limited duration being expressed.

How could God, who is wanting to reveal things to us through the Bible, confuse us by using a single word that sometimes means "eternity" while other times carries a very different meaning? I realize that when we translate from the Greek it is sometimes necessary to use English "idiom" or expression to relay the meaning ... but could a single Greek word carry such opposite meanings as "eternal" and "temporary?"


LET’S LOOK AT JUST A FEW SAMPLE PASSAGES OF SCRIPTURE

Compare the following passages. Note that in the Concordant Literal New Testament (CLNT) translation when the word "aionian" or "aion" is found, the English equivalent "eonian" or "eon" is used.

Is hell forever? Most Bible teachers today say that the righteous go to heaven, and the wicked to hell, FOREVER! But is this what the Bible teaches?

"At the End of the Ages" presents evidence that the Bible, in the original languages, reveals that one day ALL mankind will be saved. Through time our Bible translations have become biased through the official teachings of "The Church."

The author argues that teaching about an eternal hell slanders God, and it prevents many from having faith because the arguments in support of an eternal torment are illogical. Would a God of love keep many souls alive forever just to torment them because they failed to "accept Jesus Christ" in this lifetime?

The author shows that the Bible does not teach this. The "lake of fire" is not forever, but only "for the eons," and exists for the purpose of correcting, not tormenting. The purpose of "the eons" (mistranslated "eternity") is to bring ALL mankind to the point where God’s authority is recognized, and every knee bows before Him.

Other books taking this position are usually very scholarly and difficult to follow. "At the End of the Ages" is written with the average reader in mind.

Bob Evely is a Marketing Manager for a real estate information company. He is a graduate of Oakland University (Rochester, Michigan) and has an M.Div. degree from Asbury Theological Seminary (Wilmore, Kentucky). For 8-1/2 years Bob served as a bi-vocational Methodist pastor, supporting his family through his full time employment.

In May, 2002 Bob resigned as pastor to found Grace Evangel Fellowship, a home church based in Wilmore, Kentucky.

Bob resides in Wilmore, Kentucky with his wife Jill. They have been married for 27 years and have five children.

This is the first book by the author. He can be contacted by writing to Grace Evangel Fellowship, P. O. Box 6, Wilmore, Kentucky 40390.