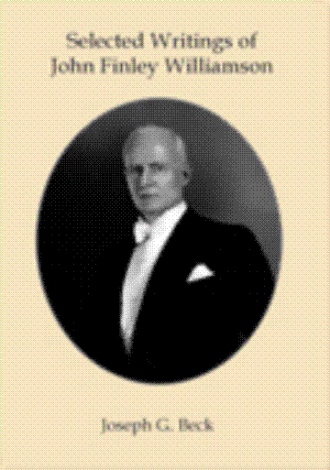 John Finley Williamson founded the Westminster Choir in 1920 at the Westminster Presbyterian Church of Dayton, Ohio.  Convinced that professionally trained musicians could best serve the church, he established the in September 1926 with sixty students and a faculty of ten.  As the Choir School and its Choir’s reputation grew, the demand for the School’s graduates increased.  The graduates came to be known as “Ministers of Music”, a term coined by Dr. Williamson and still being used today by many church music programs.

As early as 1922, the Choir, then known as the Dayton Westminster Choir, began touring the United States annually and sang in such prominent places as Carnegie Hall (New York City), Symphony Hall (Boston), the Academy of Music (Philadelphia), Orchestra Hall (Chicago) and the White House for President Coolidge.  Years later the Choir also sang for Presidents Roosevelt and Eisenhower.

The Westminster Choir made its first commercial recording with RCA Victor in 1926. Subsequently the Choir recorded with major conductors and orchestras; these recordings are listed in the Discography.

In 1928, the Westminster Choir and Cincinnati Orchestra conducted by Leopold Stokowski made the nation’s first coast-to-coast radio broadcast on station WLW. A few years later because of the Choir’s growing reputation it made a total of 60 half-hour broadcasts from NBC’s facilities.

The first European tour took place in 1929 and was sponsored by philanthropist Katharine Hauk Talbott and endorsed by Walter Damrosch, conductor of the New York Symphony. The tour included 26 concerts in major cities of .

Originally a three year program, the Choir School moved to in in 1929 and enlarged its curriculum to a four year program culminating in a Bachelor of Music degree.  This move ultimately proved unsatisfactory.

In 1932, the Choir .School  relocated to which became its permanent home. Classes were held in the First Presbyterian Church and the Princeton Seminary until 1934 when the Choir School moved into  its present campus.  This was made possible by a large gift from the philanthropist Sophia Strong Taylor.  The dedication of the new campus was marked by a performance of Bach’s Mass in B Minor at the Princeton University Chapel with the Westminster Choir, soloists, and the Philadelphia Orchestra conducted by Leopold Stokowski.  Because of his high regard for the Choir, the services of the soloists, orchestra, and conductor were a gift from Maestro Stokowski.

There was a second European Choir tour in 1934 lasting nine weeks and highlighted by a live radio broadcast from to the .  It is interesting to note that in the fourteen short years since its founding in 1920, the Choir already had two European tours which earned it international acclaim and a campus of its own. The State of in 1939 granted the Choir School accreditation and the name was adopted.

In years to come, under Dr. Williamson’s leadership, the Choir would begin having regular concerts with the New York Philharmonic and the Philadelphia Orchestra. The Westminster Choir sang with the New York Philharmonic for the first time in 1939 conducted by Sir John Barbirolli.  Since that time the Choir has sung over three hundred performances with the Philharmonic, a record number for a single choir to perform with an orchestra.  Later that year the Choir sang with the NBC Orchestra conducted by Arturo Toscanini.  That same year the Choir, directed by Dr. Williamson, sang at the dedication of the World’s Fair which was broadcast to fifty-three countries.

In 1957, under the auspices of the U.S. State Department Cultural Exchange Program, the Choir undertook a five month world tour, concertizing in twenty-two countries, covering 40,000 miles and appearing before approximately a quarter of a million people.

Dr. Williamson retired as President of Westminster Choir College in 1958; however, he continued to give choral clinics and seminars around the world. Most notably in 1959, the U.S. State Department asked Dr. Williamson to organize a alumni choir to tour .  This choir was called the Westminster Singers. The African tour consisted of performances in fifty cities in twenty-six countries with audiences totaling more than 250,000.  Following this tour, at the invitation of leading vocal teachers and choral conductors, Dr. Williamson’s “retirement” consisted of conducting choral clinics and vocal festivals throughout the United States Japan, and the .  A South American choir tour was being planned by the State Department but was canceled because of Dr. Williamson’s untimely death in 1964. 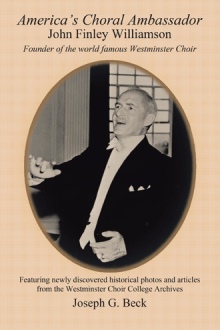 John Finley Williamson, born 1887, died 1964, was the founder  of Westminster Choir and co-founder of .  Dr. Williamson is considered one of the most influential choral conductors of the twentieth century.  He was described by the New York Times as the “dean of American choral directors”.

Under his leadership the choir was the first American choir to tour internationally, winning acclaim worldwide.  Westminster Choir performed and recorded with major symphony orchestras with conductors Toscanini, Walter,  Stokowski, Von Karajan, Bernstein and others.

The College Dr. Williamson founded in 1926 recently celebrated its 75th anniversary.  This volume includes a 75 year discography of the Westminister Choir and various articles and lectures by Dr. Williamson.

Dr. Beck is a graduate of and was a student of John Finley Williamson.  He earned a Master of Arts in Voice from and a Doctor of Education from .

Dr. Beck is President of JGB Productions Inc, a film and video company and has taught choral and vocal music at , , Webster, and universities.

In addition he has been a choral/vocal reviewer for The American Music Teacher Magazine and is a contributor to The Choral Journal.