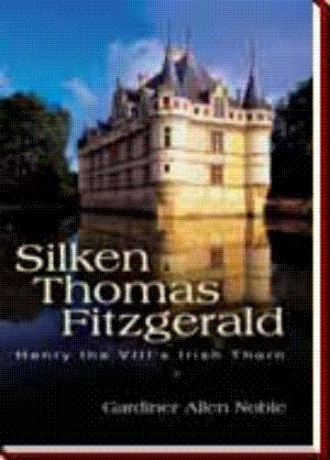 It was October 1536. Frances had spent the morning, which had become her habit, working in the garden. Most of her plants showed subtle signs that the summer would soon be gone. She accepted their intuitiveness with reluctance for they had become more than mere plants to her. Her preoccupation with their care had helped ease the anxiety she experienced every time she thought of Thomas.

Frances had just climbed to her feet and was surveying her morning’s work with satisfaction when Mrs. Geir called out from the kitchen door that she had two visitors. Frances queried her as to their identity and she answered that it was Father Travers and another priest from the Spanish Embassy.

Frances knew instantly they had come to recount the status of the negotiations. Her heart pounded. Their news, she knew, could be what she had been praying for. But her logical mind warned her that it might also be worrisome. Frances stripped off her gardening gloves and went directly to where the two priests stood waiting to greet her.

Father Travers accepted her extended hand and introduced her to Father Richard Gallucci. He was a middle-aged man that Frances recognized would always be young. Some quality bared by his dark friendly eyes made Frances feel trusting and strangely feminine. Father Gallucci took her hand firmly and in perfect English explained how honored he was to meet the wife of Lord Thomas Fitzgerald, a man who he greatly admired. Frances graciously acknowledged the compliment while she turned to Father Travers anxious to hear the news he bore.

As she expected, Father Travers came directly to the point. "Frances, the authorities in Belgium have executed Father Tyndale. He was burned at the stake October 6th."

Father Travers’ news created a cascade of questions that raced through her mind, the answer to some of which she knew only too well.

"Well, what will Henry do?" she asked fearfully.

"He will react in kind," replied Father Travers bluntly.

"But Father Travers," interjected Father Gallucci, "will he be able to do so immediately? Won’t he have to get parliament to pass an act of attainer?"

"Cromwell," replied Father Travers, "had parliament do just that against Thomas and all five of his uncles this past July. Sir James and Sir Richard were included in the act so they could be part of the bait offered in the scheme to retrieve Father Tyndale."

Before anything more could be said, a sound at the front door announced the arrival home of Sir Adrian. On seeing the two priests, he remarked, "I suspect you’re here because of the news?"

"Yes, Sir Adrian. We have been discussing its implications. Oh, by the way, I would like you to meet Father Richard Gallucci of Ambassador Chapuys’ staff."

"Fine, Father. I am curious, isn’t Gallucci an Italian name?"

"Yes, it is, Sir Adrian. I am originally from Florence but I have worked for the Emperor for many years."

"How," interposed Father Travers, "did you come by the news, Sir Adrian?"

"It’s all over London. I might say, the news is provoking extreme reactions."

"I am not surprised," commented Father Gallucci. "Father Tyndale dealt with issues that touched men’s souls."

"What conclusions," asked Sir Adrian, "have the three of you drawn?"

"Few," replied Father Travers, "but importantly we’ve concluded that Henry will react violently. He had great plans for Father Tyndale. He will take his frustrations out on someone."

"I am afraid," mused Sir Adrian, "Thomas and his uncles are likely targets. To suggest otherwise is to do disservice to the truth."

"I sense you have other news. Is that so, Sir Adrian?" asked Father Gallucci.

"Silken" Thomas- Henry VIII 's Irish Thorn is in the tradition of the epic novel. The period is the 1530's. The young Irish lord "Silken" Thomas Fitzgerald has challenged the cruel religious policies of Henry VIII by renouncing his sword of state. Henry counters by sending an army to Ireland.

The novel begins with Thomas' trek, precipitated by the fall of his family's castle, to an allay's sronghold in the west of Ireland. Once there he and his wife, Frances, struggle to rekindle the revolt's waning popularity. Their efforts fail and Frances goes to England where she appeals to her cousin Ann Boleyn to intercede on Thomas' behalf with her husband Henry VIII.

Thomas, after surrendering-on-terms, later treacherously rescended by Henry, returns to England where he is imprisoned in the Tower. The novel concludes by describing the events that occur when the desperate efforts of Frances, and a priest friend, fail to obtain amnesty for Thomas.

In this his first novel Gardiner Noble, a devotee of Irish history, has fulfilled his long held ambition to exonerate "Silken" Thomas Fitzgerald's reputation from the cruel criticism of English historians.