Picasso Was a Punk 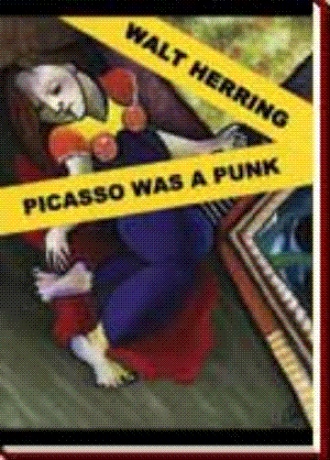 “Got anything for me, Doc?” Detective Sergeant Joe Scanlon asked as he looked at the body of a beautiful teen-ager, her head listing at an angle impossible to attain in life. She could be a model for Picasso now, Scanlon thought before he shook his head to banish the nightmarish image.

“I got alimony payments to two ex-wives and four ingrates for children. You want some?” Abrams responded in a sing-song voice as he peered over glasses perched precariously on the end of his nose. Judging by the bumps and curves, the doctor’s nose had been broken at least twice, Scanlon noted.

“Why can’t you be more like those TV medical examiners?” Scanlon griped. “Cripes, when Quincy’s around, the cops can take the day off. He always gets his man.”

“Yes, and even though he has a face that was rejected for Mr. Potato Head, he always gets the girl. What do I get? A hard time and hemorrhoids. There is no justice, my friend,” Abrams kvetched in mock seriousness.

The aged M.E. had a reputation for being painstakingly meticulous. He didn’t make mistakes, and he didn’t stack his findings to help the police or the district attorney sandbag a case. Scanlon enjoyed working with him and had come to treasure his banter with the misanthropic medicine man.

Abrams walked slowly, painfully, knees crippled by arthritis from too many years of kneeling at crime scenes. He could have retired years earlier, but he continued to work. Abrams maintained he needed the money. Scanlon thought the M.E. needed to continue trying to understand why people acted so savagely toward each other.

The doctor removed his glasses, slid them into a case and sighed heavily as he rubbed his temples. “Bad business, this,” Abrams told the night sky. “She was tortured, raped, denigrated, then her throat was cut. We have hair and semen samples that should give us blood type, hair color, sex, race ... real genetic fingerprints of our poor, misunderstood sociopaths.”

“Anything else, Doc?” Scanlon interrupted impatiently. He looked at the beautiful terra-cotta ornamentation adorning the roofline of the art museum. His eyes came to rest on the granite griffins standing silent sentry on the cornices, mute witnesses to the savagery that had unfolded below.

“Yes, one big thing. She probably IDed one of them for you as she was dying. Under her nails is a lot of tissue. Looks like she scratched the hell out of one of her attackers. I’d say if you find someone with deep scratches, probably on the face, you could break out the rubber hoses.”

“Doc, there’s a bagel with your name on it waiting for you back at the office,” Scanlon yelled as he headed for the fountain in front of the museum, where a young man’s body had been found.

“Great, Quincy gets the girl; I get a bagel,” Scanlon overheard Abrams grousing as he trudged off. “There is no justice.”

Detective Sgt. JOE SCANLON is a tough Philadelphia cop called to the scene of the crucifixion murder of an African-American boy. Within minutes of that murder, Scanlon is dispatched to the double homicide of a rich, Main Line white couple at the Art Museum. Scanlon and his partner CLAY MATTHEWS try to solve the cases before the city explodes in a race war, and Scanlon finds himself falling in love with the murdered woman’s sister, TRACY WALLS, a Grace Kelly look-a-like.

Scanlon’s former lover Officer NIKKI RUIZ is assigned to help with the investigations, and they find themselves tracking a serial killer named JESUS MARTINEZ. As Scanlon closes in on Martinez, the killer lures Ruiz into a trap. Martinez paralyzes Ruiz and leaves her to die in an abandoned factory in North Philadelphia. As the city erupts in a race riot, the child-killer strikes again; a second boy is found crucified in Fairmount Park. Scanlon believes a priest or a cop is the murderer.

Tracy Walls is targeted by Martinez, and Scanlon races to rescue her as she is stalked through the closed Art Museum. Scanlon saves Tracy, and shoots Martinez, who falls dead into the famous “Rocky” fountain.

Walt Herring is an award-winning writer and editor who worked at major newspapers across the United States, including the St. Petersburg Times, the Philadelphia Daily News and the Detroit News.

During his newspaper career Herring won five National Headliner Awards and a Clarion Award for his investigative journalism in Pennsylvania and New Jersey, and for coverage of human rights violations in South Africa and El Salvador.

Herring also taught writing at the University of Washington in Seattle. Herring lives on Treasure Island, on Florida’s West Coast, where he is at work on his third novel.