The Adventures of the Sneeky Sneekers 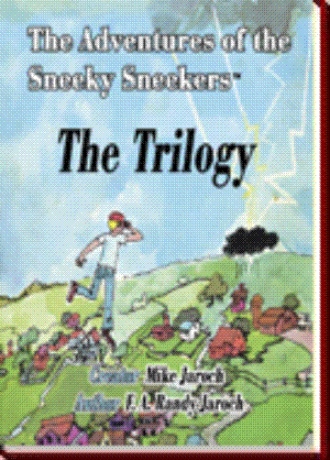 It was cool, cloudy, and windy... perfect weather for Halloween.

Chipp was checking his costume. He was a devil, complete with horns and a pitchfork.

Randy held up a wiggly rubber snake . "I can't wait for all the tricks I'm going to pull."

Rod rubbed his belly. "I can't wait for all the treats I'm going to eat!"

"Well, let's be careful and stay together," Chipp said. He started to wrap pieces of tape around each of his arms.

"This is reflective tape. Later tonight when car headlights shine on me, this tape will glow. Then drivers can see me."

Randy giggled. "You're always thinking, Chipp. Give us some of that tape."

Randy and Rod stuck pieces of the tape on each other's back. Chipp taped his pointed red tail. "A handsome devil, aren't I?"

Just then the door flew open. A sad faced hobo rushed in. It was Mike, the oldest brother. "Look guys," he said. "Another mysterious letter!" The boys gathered around as Mike began to read:

Chipp turned to Mike. "Hmm, another unsigned letter," he said in a puzzled voice. "Do you know who is sending them to us?"

"I think so," answered Mike, "but I better keep my ideas to myself until I'm sure. Besides, what's most important are the sneakers that our special friend sent."

It was true. Those sneakers looked ordinary enough, but each pair gave a different magic power. Mike's sneakers were blue and gave him the power of super speed. Chipp's green ones made him super smart. When Randy wore his red pair, he was able to float and jump high in the sky. And Rod's yellow sneakers gave him super strength.

The boys had decided not to tell anyone else about their magic sneakers. They formed a secret club, called the SNEEKY SNEEKERS, and agreed to use their powers only to help other people.

The Adventures of the Sneeky Sneekers

-the Trilogy, is storytelling at it’s best. Children can identify with the Sneeky Sneekers. In a time when constant viewing of television acts to stifle a child’s creativity, the stories promote a world where the fantasies of super powers – only to do good – come real for four brothers. The stories will encourage the use of a child’s imagination. They have been most helpful for children with reading problems and appealing for the advanced younger reader. The stories are wholesome, family-oriented, and each adventure serves to teach a good lesson.

About the Creator – Mike Jaroch

As the most imaginative child in a family of thirteen children, Mike organized a secret club with his three younger brothers, Chipp, Randy, and Rod. Through the powers of their magical sneakers, their fantasies became real. Years later, Mike began telling his own children about The Adventures of the Sneeky Sneekers. Julie and Michael loved the stories so much that Mike decided to bring the Sneeky Sneekers to life in a series of children’s books. Now, through the magic of e-books, children everywhere can once again enjoy Mike’s creation.

About the Author – F.A. Randy Jaroch

Randy Jaroch is an accomplished, award-winning copywriter, poet, and lyricist. For the past thirty years, he has written promotional and direct response marketing campaigns, both as a freelancer and a staff writer, for a variety of prestigious marketing clients and firms. In addition to his lead authoring contribution to The Adventures of the Sneeky Sneekers, Randy is the author of an introspective volume of poetry, The Ripening, published by St. Mary’s College Press.