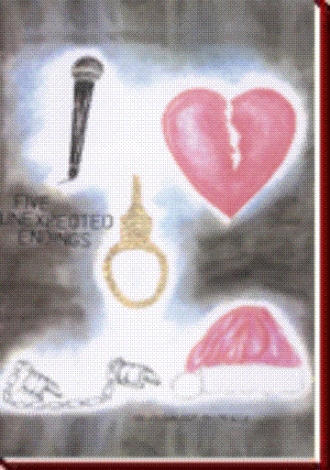 The short stories that comprise Five Unexpected Endings are meant not only to entertain, but to give reassurance to the idea that no matter our individual background or circumstances, we are all part of the human race, and as such we all have the same hopes, the same fears, and the same insecurities. And we are all subject to the direst of consequences for all of our negative actions.

In the first story, "Lula Jean," a pretty young woman living in the rural south, learns that there are pitfalls to pride, that it is never good to turn one's back on those who really care. She has been blessed with a beautiful face, a fantastic figure, and an amazing voice, and in her mind these gifts tell her that she is somehow better than those around her. Through her, as well as the characters around her, the reader sees that there is much more to a person than what is seen on the outside, that it is ultimately a person's heart and not their physical attributes that determines who they truly are.

The next story, "A Price for Payback," is an authentic example of what can happen when a person spurned by an unfaithful partner decides to take revenge into his own hands. We all feel the need for revenge when someone has truly hurt us, someone to whom we have entrusted our hearts. But in the end, revenge of the heart does more damage to the revenger than to the revengee; only forgiveness can truly get one over past hurts.

In "Bessie's Smile," a mother's anguish is played out against the backdrop of slavery. Antebellum society rears its ugly head in many forms, and the indifference concerning the humanity of an entire race of people is more than capable of producing monstrous acts. In the end, the smile on Bessie's face comes at a price she should not have had to pay.

"Irene's Last Right" deals with the 1939 execution of a woman and her desire to see a child she gave birth to years earlier before she is put to death. She is ministered to by a 2 preacher, who himself must deal not only with the adopted mother of the child Irene gave birth to but also his own congregation, many of whom resent the fact that their pastor has any dealing whatsoever with a convicted murderer facing imminent death. The fact that all of the central characters are African-American adds depth to the plot when one considers the monumental role the church plays in black society. It is a classic battle between morality and politics.

The last story, "Santa Claus," tells of an elderly man who finds new meaning in life when, as a result of an 'incident' one holiday season, he is reassigned to play the role of Santa Claus at a mall located in an economically-deprived area. He encounters children who are a far cry from the ones he's used to dealing with in a much more affluent area, and this experience causes him to take stock of his own life, of his own set of values. It is an eye- opening tale, to say the least.

is a collection of short stories intended to show people as people, human beings with real emotions. It is meant to affirm the humanity of all of us, and it is meant to show that life is truly unpredictable. Every day we are alive is a precious day, and we must never take our days, nor the days of others, for granted.

"I find your offer sir, to be an agreeable one." This signaled to the crowd that there would not be a hanging, and many began to sullenly walk away upon being denied the once in a lifetime opportunity of seeing an infant strangled:

Life often produces monumental pain and suffering, and yet it is so easy for too many of us to ignore the pain of others we see around us. Five Unexpected Endings is a collection of five short stories, which depict various characters from various backgrounds who all have one thing in common: They are part of the human race.

The stories are meant to entertain, but they are also intended to show that we all have the same fears, insecurities, needs, and desires. We must always consider those we are on the planet with, and we must never consider anyone as less important than we are.

is meant to uplift and comfort, but it is also meant to warn that there are consequences when we do not respect the humanity of our fellow man.

Ariton Jay Brundidge is the pseudonym of an author born in Baltimore, Maryland who has written several short stories and screen plays, as well as a stage play and various poems. He attended Baltimore City public schools and is currently a student at Ohio University. This is his first publication.