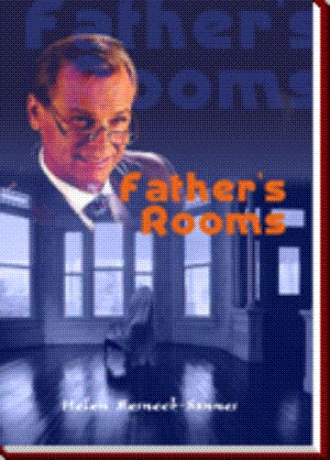 The Alzheimers genie who lives behind my father’s eyes has taken away the liveliness and intelligence. They are vacant. Once when Myrrhia was two or three-years-old I hired a teenage girl to watch her while David and I went out to dinner for a couple of hours. The girl was very nice, but a little slow intellectually. When I asked Myrrhia how it went, she said: "Mommy, it didn’t go well. That girl was a vacant lot." That’s what my dad’s eyes look like now, a vacant lot.

Dad slowly eats his muffin and sips his juice. He begins folding the muffin paper again and I tell him: "It's time to go. Thanks for everything Rebecca."

Dad says emphatically, "I’m not going like this. Call The Mansion." Some feeling is back in his eyes, but they are hard and he isn't fully present.

"Let’s go to court and see what your lawyer thinks. If he says you need a coat, we’ll drive back up there and get you one."

The gray court building matches the gray sky. I hope this works out. I don’t know what they will do if Dad throws a tantrum. I worry that they will put him in jail or the psychiatric ward, or God forbid, have to schedule the damn hearing again.

Nick and Tom are waiting outside the courtroom. I say to each of them, "Dad is worried about how he’s dressed. Does he need a jacket?"

Nick reassures him. "You look fine Mr. Resneck. After all, this is Santa Cruz, you know California. People don’t dress up so much here. It's not like Indiana."

"I wanted to look nice but Helen wouldn’t take me back to get my coat. Once this is settled, I can do these things for myself. It’s frustrating."

We enter the courtroom and I find Dad a Kleenex. His nose has been dripping and I think he has developed allergies in Santa Cruz. We sit down and Dad holds my hand. The same woman who was present at the last hearing is sitting by the judge and taking notes. I’m not certain of her role, but she has a kind face and smiles at me. I think I should return her smile but I’m not certain that I feel like smiling right now. Then I remember a day long ago when I was about four or five years old and I’m walking with Billy and Dad. It’s a bright sunny day and I think we are downtown in Marion. A woman stops and talks to us and gives me an apple. She doesn’t offer Billy or Dad anything and I ask my dad about that. "She liked your smile. When you smile, you can have anything Helen. Remember to always smile." I don’t like the idea of being forced to smile; and if pressured to perform, will dig in my heels and not budge. However, this time I realize I’m grateful for the smile. It has been a difficult morning with Dad, and I think maybe she sees something sweet between us. I smile back at her.

This is a trial and the various people who have been involved in Dad’s life in Santa Cruz must testify. John Gillette, the psychiatrist reports on his stay at Sunshine Villa, how he roamed Santa Cruz and the police were required to return him. He also brings up the incident at The Mansion last week in which Dad reached out to stab one of the staff with a fork. I want to protest. The guy grabbed his bowl from him when he wasn’t ready to give it up. Don’t you understand Alzheimers? It's like dealing with two year olds. He would have given up the bowl in his own time. And so what if he didn’t? So what if he took it back to his room? You could have retrieved the bowl later, when he’d forgotten about it. But I’m worried. What if Dad really is crazy, had suddenly stabbed him without good provocation? But he should have asked Dad if he was finished. He wouldn't have stabbed him for no reason. I say nothing. It’s to my benefit if they hear this story as is.

Dr. Gillette continues his testimony. He says: "Helen has tried to be fair with her father and give him as much independence as he can manage, but I certainly believe that he needs to be in a locked facility. Mr. Resneck, although in his eighties, is a vigorous man. He’s had many escapades hitching all over Santa Cruz. I’m not certain that he can’t climb the fence at The Mansion if he chooses. He definitely needs to be contained."

I wonder how much of this Dad is taking in. His eyes look a little vacant again. He’s asked to take the stand and to raise his right hand and swear to tell the whole truth and nothing but the truth so help me God. But what is truth to him at this point? They should say: "Do you swear to tell what you think you know as the truth at this point but may have forgotten or have confabulated to make things seem like what you want them to seem?" He says, "I do." He even puts in his hearing aid, which he normally resists wearing. He looks absolutely delighted to be sitting up there.

Father’s Rooms is a sweet, humorous and painfully revealing memoir which chronicles a fifty-year-old daughter’s experiences of caring for her father with dementia. Helen arrives at her hometown in the Midwest to take her popular and respected father to California. She has received numerous phone calls and letters about his behavior. She wants to deny his diagnosis of Alzheimers, even as she arrives to rescue him. Her father is the family hero. His illness surfaces conflictual feelings among his children.

While admitting his diagnosis, he still tries to renew his driver’s license, hitch hikes around California, and appropriates the laundry room of his assisted living home.

Although a non-fiction memoir, Father’s Rooms has the dramatic elements of fiction. Place becomes a metaphor for her father’s internal world. As the disease progresses, the author must move her father to facilities, which provide more care and greater restrictions. His rooms mirror the interior landscape of his disease.

This book is a must read for adult children or partners of people suffering from Alzheimers. It combines the self-help guidance of The Thirty-Six Hour Day, and the philosophical sweetness of Tuesdays With Morrie, to tell a piercing story of love and loss that never hides in sentimentality or romanticzation.

Helen Resneck-Sannes is a psychologist in private practice in Santa Cruz California. She also teaches and lectures nationally and internationally for the International Institute for Bioenergetic Analysis.

While know for her publications in psychology journals and books, she has also published short stories and poems. A chapter from Father’s Rooms is already available in an anthology of stories about Alzheimer’s called : Love is Ageless. Writing the memoir was healing not only for herself, but her family as well. She hopes it can help other who are trying to come to terms with this disease in themselves and the people they love.