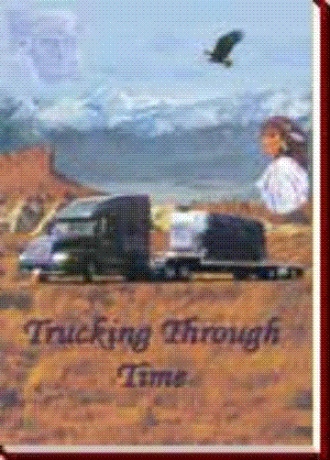 Dale pulled his jeep into the parking lot and parked beside the truck he and Chad were driving out on their weekly trip to Los Angeles from Atlanta. Chad had already cleaned the cab and hooked the CB radio. It was his turn to refill the cooler with a few knickknacks and bring clean sheets and pillowcases. Dale was ready to hand up his personal gear to Chad, when he asked,

“How was your weekend partner?”

“I know what you mean. Seems to get shorter every week.”

Before setting up the bunk and storing his personal gear, Dale asked which trailer they were taking this week. Chad told him they had to check with dispatch that he didn't know yet. On most occasions, they took a flatbed or covered wagon, but there seemed to be a change in their normal routine this time. Chad pulled the truck up to the dispatch office and they both went inside.

“What's up Tommy?” Chad asked the dispatcher as Dale headed for the coffeepot.

“Too cheap to buy coffee I suppose.” Dale said as he sat down in a lounge chair and picked up a trucker magazine.

“Change in plans, gentlemen. We don't have the normal trip to L.A. this week. The company we've been servicing has closed their operations in that area and moved their base to the Bay area. Has something to do with routing and taxes. I'm not real sure the reasons, but I do know they will have much more tonnage coming out of that area and that means more freight and loads for us in the long run.

“Looks as though you will be running the northwest from now on. The company requested you on this run because they know you will be on time. You haven't been late on a shipment for them so far. Dale you ever been to the Bay area?”

“No, and I have no desire to go there either.”

“Well, before you decide against it, let me fill you in on the details.” Tommy began. “You two were paid very well for the L.A. trip. This run is exceptional also. It pays $450 more in pay miles and has an extra $30 for a drop in Ogalalla, NE. It will take the same amount of time as the L.A. run because it's drop and hook and there is no waiting for a load. You will be loaded right back for Atlanta. You won't even have to deliver the load on the return trip, just drop the trailer in the yard and they will have someone pick it up. You'll only have one pallet to unload in Ogalalla and they are a 24- hour operation so you won't have to wait there either. This deal was set up with you in mind and is yours if you want it. Now what do you say?”

“OK by me.” Chad said with a wide grin and looked to Dale for a response. “Sounds good to me too, since there's a little more money in it. Just as long as we're back by Friday, I'm for it. I like my weekends at home.”

After thirty-five years driving over the road, Mr. Charles E. Harris has resolved himself to enjoying the festivities and action of NCAA football. His driving now consists of hauling the football equipment for his beloved Volunteers of Tennessee.

Sometime after football season, he will be collecting data for his second novel.