The Millers of Colfax 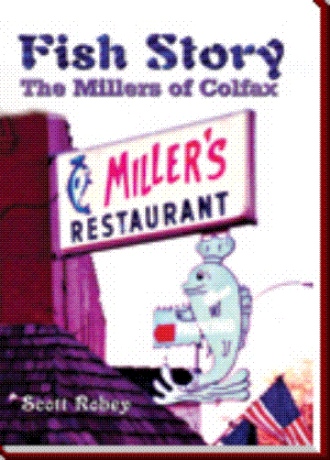 The catfish is a plenty good enough fish for anyone.
—Mark Twain

A man ambled along Colfax’s Oakland Street toward the center of town. He needn’t be closer than two blocks from view for anyone to know who was approaching in the late afternoon sunlight. A powerful hulk of a man—always walking with his shoulders hunched slightly forward, he was dressed in a bright white uniform so heavily starched one wondered how the man could move at all. But it was the uniform he’d worn almost every afternoon for nearly fifty years. Most afternoons he walked at a brisk pace, an energetic gait of someone who was about to go on stage to perform—and most who knew him considered him a virtuoso performer. But this late afternoon of April 15, 1995, his stride was shorter, slower. He had tried for days to not dwell on this afternoon’s stroll—the last he would ever take as the owner of Miller’s Restaurant.

James L. Miller and his son and co-owner, Mike, had made the decision that their business of nearly fifty years should be sold. This afternoon was the beginning of the last day the Miller family was to own a business that had defined their lives and the reputation of the small farm town of Colfax, Indiana. It was a difficult decision, but one that had to be made. Even when the details of the sale were being worked out, it didn’t really register that this last walk would be only a few weeks away. James L. Miller paused in front of Wright’s Hardware Store at the corner of Oakland and Franklin to peer across the street and take one last panoramic view of his business—a business that would belong to someone else on Monday.

It took only seconds to distill the memories that had accumulated since the late October evening in 1946 when he first showed his young wife, Mary Ellen, what was to be their new livelihood. He allowed a faint smile to spread across his face when he remembered her reaction to the smoke-filled beer hall and the shocking event that had unfolded as they pulled up to the side of the building. Yet, just as she had done in the first years of their marriage, she followed him toward his dream—a dream that came true in the little town of Colfax. The town of Colfax, Indiana has a land area of one-third square mile, about two hundred and twelve acres. It has never been populated by more than 850 citizens at any time in its history. For those wondering what Colfax might be close to, the answer is simple: the only place it’s close to is the ground. The state capitol of Indianapolis is forty miles away (as the crow flies) and Lafayette is nearly twenty miles to the northwest. If the retail mantra of “location, location, location” is true, then the story of Miller’s Restaurant becomes quite implausible.

The story of Miller’s begins in 1946 when a young man took the plunge and bought a business that had, for the most part, been nothing more than a raucous beer joint that would have fit comfortably in a scene from the Old West. Through a combination of talent, excruciating hard work, experimentation, and some luck, Miller’s grew to become one of the most famous dining establishments in the history of Indiana. What follows is the story of Miller’s Restaurant and how it built its reputation throughout the United States and several foreign countries. While there are a number of restaurants throughout Indiana that have enjoyed widespread recognition in Indiana and the Midwest, few can claim the nationwide reputation that Miller’s built during its nearly fifty years of ownership by the Miller family of Colfax.

The story of Miller’s Fish Suppers is more than just a story of good food and service; it’s a story of a community—a community that was, early on, uncertain it wanted this young couple and, what was then, their tavern. Not many years passed before the community discovered it was becoming as famous as the fish suppers being served at the corner of Railroad and Oakland streets.

Most small towns spend their days in quiet obscurity. Colfax was far from obscure. In the period spanning from October 1946 to April 1995, nearly five million people found their way to Colfax and over fifteen million catfish sacrificed their lives to satisfy the cravings of those who made the trip. This fish story is, in the parlance of the town liar’s bench, a real “whopper”. The only difference is—this “whopper” is true.

If the retail mantra “location, location, location” is true, then the story of Miller’s Restaurant is an incongruous one. When James L. Miller and his wife, Mary Ellen, purchased a grimy beer joint that was fraught with rats, cockroaches and assorted local derelicts their dream was modest. They just wanted to clean the place up and turn into a nice little family restaurant. Tucked away in the cornfields of Clinton County, Indiana the only thing close to the town of Colfax was the ground.

After cleaning up what became Miller’s Restaurant and having their destiny altered due to a visit by the Indiana Department of the Treasury, the Millers launched a menu that created a craving that lured over 5,000,000 people to Colfax during their ownership of the business. That the primary attraction was fried catfish and onion rings is itself illogical but attract people they did. From the rich and famous to the farmers and factory workers of the surrounding area, Miller’s became a dining establishment where the wait for a table could last up to two hours. Yet, people were willing to endure the wait to satisfy their cravings. Cravings so intense that some were unwilling to evacuate the restaurant during a 1980 fire until they were served their food.

Fish Story: The Millers of Colfax is the story of how the Miller families worked to make their dreams come true and how they endeared themselves to legions of loyal customers. The story is complete; from the moment Mary Ellen Miller watched an attempted murder occur outside the business her husband had just purchased, to the sale of the restaurant to outside interests in 1995, to the destruction of the property in December 2000 at the hands of an arsonist.

Fish Story: The Millers of Colfax is about people. The Miller family, its cadre of loyal and hard working employees, the residents of Colfax, Indiana and the tens of thousands of customers who frequented Miller’s. It’s a story about building a business in a small town that may never be repeated, but it is a story that could be used as a blueprint for those willing to make the attempt.

Scott Robey is a native of Colfax, Indiana. He has spent most of his professional career in advertising and public relations writing ads, radio and television commercials and feature stories, attempting to make his clients appear better than they actually were. He has worked as an independent marketing services consultant since 1996.

As was the case with many teenage boys growing up in Colfax, Robey once worked as a bus boy at Miller’s Restaurant and has been a close friend of the Miller family for nearly fifty years. He lives in Lafayette, Indiana with his beautiful wife of thirty-four years, Susan.