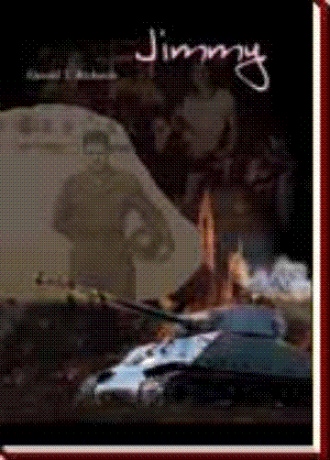 Jimmy slowly returns to consciousness, aware of the cold. Pain replaces the confusion in his head. His body aches all over. His eyes open against his will. He shields them from the bright light and tries to focus on something, anything.

Above him, just out of reach, is the grid made by the wires, straps, and springs of a U.S. Army cot supported upon its twin that must be under him. Confusion returns, pushing out the pain. Jimmy's room has no upper bunks. His head turns toward the center of the room, drawn by the heat from a single, bare, white light -- nothing but white walls in that direction, and the light. He looks toward his feet and, in the wall beyond, sees bars where a window once was; no glass, just a rectangular hole in the wall with bars that sucks in light and drains the heat.

Jimmy raises himself toward a sitting position. Pain rushes back into his head and pushes everything else out. When he ducks his head under the cot above, every passage and space in his head fills with pain. His feet touch the floor. He steadies his head in his hands, supporting its weight with his elbows upon his knees. He sees his shoes and realizes there are no laces in them. His eyes move back toward his body -- no belt, no tie. Discoloration marks his uniform's front. The cot under him has no blanket, sheets, mattress cover or pillow - just a bare mattress. He allows his neck muscles to hold his heavy head, and uses his arms to push himself up, directly under the glaring light bulb. There is a doorway opposite the window, but no door. Turning toward it, he moves slowly, to still the sloshing pain in his head.

Jimmy looks out into a short hall and sees another doorway on the same side of the hall. Moving down to the other doorway, he leans his upper body inside -- another room, empty. Movement and confusion make his heart pump faster bringing him fully awake. He becomes conscious of his body; conscious enough to know that all his parts are working and that the discoloration on his blouse is a dark, reddish color like blood mixed with the olive drab of his Ike Jacket. Feeling his face, head, neck and upper body, he finds no wound. His brain begins to take control and thoughts crowd out other sensations.

JIMMY is a story about a teenaged boy, Jimmy Warton, who joins the US Army and finds himself in war torn Germany six months later.  Jimmy had spent most of his life in Texas and Oklahoma.  Arriving in Regensburg, Germany in December 1948, Jimmy joined the First Medical Battalion of the First Infantry Division.  There he finds himself among a hard drinking, hard playing bunch of underutilized American soldiers in a country where there are few jobs and many more women than men.  To survive, German women turned to prostitution.  Jimmy tried to join in the drinking and the exploitation of women but he feels guilty with every woman.  Eventually, Jimmy’s drinking lands him in trouble.  While he awaits trial on serious charges, Jimmy gets all the alcohol out of his system and gets help from friends he didn’t know he had.  One of those friends introduces Jimmy to reading books for fun, a new concept for him, and helps him turn his life around.  Acquitted at his trial through a bit of luck and some research into legal procedure, Jimmy gets the chance few people get to make a fresh start with a clean record.

The author joined the Army at fifteen and served in U.S. Occupied Germany from December 1948 until June 1951. After college, he also served eight years as a commissioned officer reaching the rank of Major before resigning. He worked as an engineer at an oil refinery, a physicist at a nuclear weapons laboratory, a computer center manager, and an attorney in private practice. He ended his career as an attorney for the same laboratory where he worked as a physicist. In retirement, the author volunteers legal services, reads every book he can afford to buy and writes. He has written both nonfiction articles and the novel Jimmy. He has made the study of people an integral part of his research throughout his life. Knowledge of people has been essential for success in his career as an Army Officer, a manager and an attorney. He puts that knowledge to use in this work as he shows how Jimmy begins to acquire that knowledge and how those who have it make use of it.