Music in My Head 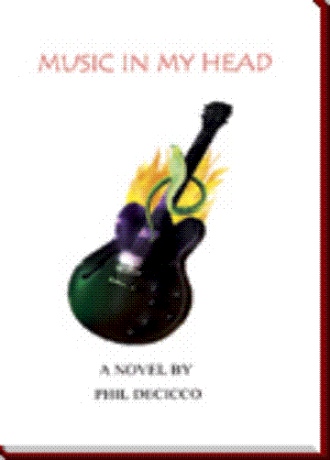 --Sweet music rolling around in my head

Mangan's altered state raised its hand, pointing to the woman running towards me. The actions surrounding me seemed to slow down while the music playing deep in the archives of my mind demodulated chromatically from the arpeggio of an up tempo guitar riff to a mellow larghetto of a viola concerto. A streaking bolt of green and orange flame discharged from Mangan's fingertips spiraling towards Casey. The half man half animal released its own sphere of reddish yellow blaze to intercede. The fiery collision sprayed several tiers of sparks around us. Casey dropped to the sand and covered her head with her arms. She made no effort to protect the unborn baby she carried within her womb. The children racing up from behind her also fell to their knees. Awestruck by the sparkling beauty of the arcing cinders, they sighed and shared an adolescent giggle between them.

The streaked columns of vapor finalized their transformations, completing the circular shape. I recognized each of them as friends and acquaintances from my past. From the yellow toned film came Felicia stepping to the immediate right and slightly up from the horned demon. To her right and a little further up stepped Maria. Flanking his left and symmetrical to Felicia and Maria were Carter and Alonzo Benjamin. I scrutinized each of their faces, looking deep into their eyes. They were there. They were really present. I could see Felicia force a sad smile from a doleful frown as her mourning eyes met mine.

Opposite from them, emerging from the green vapor came Graham, 'the animal', Spell otherwise known as Gtas. He was situated directly to Mangan's left. Aba stepped out of the green haze taking a position at Mangan's immediate right and she was followed by Nicky 'the Pigeon' Key up some and to her right. The visitors were there to provide support to their masters and mentors. It was obvious who supported whom by their color of origin and their strategic positioning on the circular outline. While I understood Mangan's support, I could not connect the others to the ruby horned monster.

Stuck in the middle of this eruption of color, I was cognizant of the lone blue star above me shadowing the circle with a line of demarcation mirroring its own shape. In blue, completely containing me, was the silhouette of a five-pointed star. The effervescent blue outline seething with activity, simmering, gurgling and fizzing, completed the unholy symbol of the pentagram. I was petrified, thinking I was about to die. Apparently Casey thought the same. She rose up from the cool, unblemished sands and charged the pentagram. Breaching the specter protected line, she confronted Mangan, challenging him to do what he believed necessary to draw this numinous manifestation to a close. A smile, so sinister it made my skin crawl, spread across the face of the serpent. His humanistic arms literally stretched out seizing each of her shoulders. She stood courageous as his blazing hands charred her creamy white skin. I shouted out to her from behind to block his touch. She refused to heed my warning allowing his blistering hands to caress her, all the while, glowering at him defiantly.

Have you ever wanted something, set a goal, harbored a strong desire and was willing to do whatever it took to get it, accomplish it or achieve it? Music in My Head presents the story of people willing to sacrifice their bodies and souls for desired glory, success and associated amenities.

It is the story of a young musician, Peter Dixon, caught in the middle of a demonic scheme to transfer intelligence, skills, and competencies from those individuals possessing them to those coveting them through the intimate acts of love making. It is the story of the devil’s chosen representative, his earthly desires and his favored concubine. It is a love story laced with egregious sex, heartbreak and self-revelation.

Peter, an unsuspecting pawn in this dangerous game of chess, rises from near death and imprisonment to achieve victory over evil’s flaming reptile, a feat only accomplished with the aid of a team of misfits adopted by God to provide an unholy war on the devil’s serpent and his minions.

Throughout the story, the reader experiences the constant battle of good vs. evil vs. evil. The reader will decide the true victor.

Phil DeCicco, a New Yorker, was born in Brooklyn, raised in Queens and currently resides in Levittown on Long Island. Phil is a graduate of St. John’s University with a degree in psychology. He is a human resources director for a major energy company in the Northeast responsible for employee learning and development.

As a pre-teen, Phil dabbled in writing short stories, all influenced by Rod Serling of Twilight Zone fame and Alfred Hitchcock. As a teenager, Phil learned how to play piano and guitar and performed in numerous local rock and roll bands. He was and still is a prolific songwriter.

In the early seventies he came across a novel, Carrie, written by Stephen King who has since become his favorite author and a major influence on his writing.

Music in My Head

, his first book, is based on his early experiences in rock and roll as viewed through macabre tinted glasses. He is presently working on his second novel, ‘Diamonds and Dirt’. He has also recorded a music CD appropriately titled ‘Finally!’ containing some of his earlier songs and is in the process of recording his second.