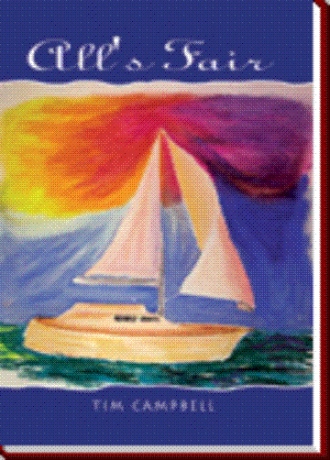 The cavernous hallway was like an echo chamber. It's terrazzo floor and dark panelled walls did little to absorb any of the cacophony of sounds generated by women's heels, doors opening and closing and the hushed conversations of passers-by. But all of this was lost to the man slouched on the balloon backed wooden bench just outside the Brunswick County Coroner's office. His entire attention was absorbed with reading the final Coroner's report concerning the death of Amy Coulter. The official cause of death was a broken neck and other internal injuries. The Coroner's ruling was that the death had been accidental. The injuries had resulted when the car which Amy Coulter had been driving southbound on Carolina Beach Road in the Summer Hills section of the city, had run off the left side of the street and struck a live oak tree. Death had been immediate. At least there was some little comfort in that. She hadn't suffered a great deal. Still that thought did nothing to console Ben Coulter. His wife was dead. His beautiful and smart wife was dead. The love of his life. Not just dead, but dead and buried. For over three months, she'd been dead and buried. And he hadn't even had the chance to see her one last time.

After only a moment's consideration, he realized exactly where he had been at the time. He and a small group of men had been laying charges to destroy a fuel depot at the Kuwait City airport. They had been surrounded by enemy fire

being directed mostly toward the heavy air cover by coalition flights, but every hour or so, there had been some sporadic fire from small ground skirmishes. Ben's squad had completed their assignment at the tank farm and were moving out to take up positions closer to the terminals at the airport when three Iraqi soldiers had burst from a tunnel under one of the runways, just a dozen feet from their point man. The veteran regular Marine sergeant had been blindsided and wouldn't have had a chance to bring his weapon around. Ben had been in the right place at the right time and he'd emptied his clip, killing all three, nearly cutting one in half. He could see the sergeant's face still. The shock and then the realization of what could have happened. Later that night, the sergeant had sworn his allegiance to the younger reserve major.

Ben wondered now how life could be so unfair. On the day his beloved wife died, he had been saving some near stranger's life half a world away from his home. And his bitterness reminded him that he had been there in the midst of that hell and had survived. His wife had stayed home where she should have been protected and safe, yet she was the one who was dead.

He heard the soft concern in the woman's voice, which yanked him back to the here and now. And as he looked up through his tears, realized that he had heard sobbing. When he saw the expression on the young woman's face, he understood that the sobbing was his own. The secretary had stopped to see if there was anything she could do to help him.

"No ... I'm sorry ... I just ... I'm sorry." He stood and walked toward the front doors and through them and down the four stairs and across the lawn to the parking lot. Now he had the toughest job to do. He had to go home. The last time he had been there was the night before he left for Saudi Arabia. That was seven months ago. And Amy had been there. Now there was no one there.

The little cottage looked just the same as when he'd left, but he knew that everything was different and that it would never be the same again. He pulled his car into the driveway, half expecting to see Amy's car there. He knew, of course, that it had been totally destroyed in the accident.

When he spoke aloud, the sound of his voice only served to emphasize just how alone he was.

He unlocked the side door which opened into the kitchen and he walked into the still and stuffy house. As he continued through the dining room and into the hall he thought that he could smell her. That subtle fragrance she always wore. It seemed to linger in the very walls.

All's Fair is the story of Ben Coulter, a thirty-something drama professor dealing with the death of his wife. Although ruled accidental, Ben is convinced that her death was suicide provoked by the theft of her business by Taylor Duckworth, a ruthless businessman who operates at the edge of the law. With the help of Allison Merryweather, whose family's business was stolen by the same thief, the professor puts his theatrical skills to work with a con of his own to get even with the crook.

Allison uses Duckworth's penchant for seducing young women, to set up the con. She becomes the old lecher's social companion, playing his kinky games. During a yacht trip to Bermuda with Duckworth, a major unexpected element converts the con game into a desperate race against time.

Drug smuggling pirates board Duckworth's yacht. He offers them enormous sums of money to spare his life. They agree, but take Allison as collateral, thinking that she is his young wife. Duckworth has a week to get the cash together.

Now it's up to Ben Coulter and his best friend, Curt Donovan, to find Allison and save her life.

Tim Campbell started writing at thirteen. And as he readily admits, he spends most of his time creating stories about people he sees in everyday life. A submarine veteran of the US Navy, he has crewed on competitive sailboats and pilots small airplanes. But his favorite life experiences come from being "Papa" to his two children and the dozens of kids who have spent untold hours at his home, enjoying his cooking and conversations. Along with his wife Bev, daughter Claire, son Colin and a golden retriever named Duncan, he physically lives and works at the foot of the Blue Ridge Mountains in Virginia, but his heart and imagination are most often at the coast.