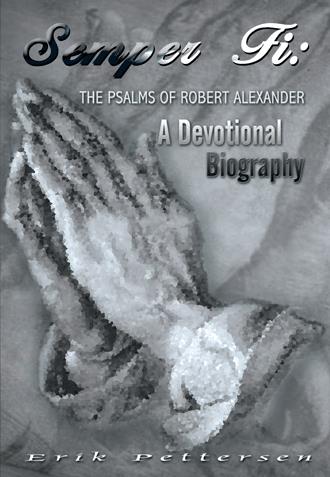 Some years ago, a friend invited me to a luncheon at the old Robert Treat hotel in Newark, New Jersey. The speaker was the famed opera singer, Jerome Hines. In discussing his life, Hines shared some of his early trials, including the fact that, at the age of thirty-four, he had been diagnosed with cancer. He related how, when he confided his diagnosis to a Christian friend, the friend's response was, "How wonderful!" Very much taken aback, Hines asked his friend, "What do you mean?" To which his friend replied, "What an opportunity to witness!"

That recollection is brought vividly to mind when I reflect on the remarkable final years of my dear friend, Robert Alexander...

...One summer morning in 1996, Robert confided that he had just been diagnosed with inoperable prostate cancer. I was naturally quite alarmed, as I had already experienced the loss of several friends and colleagues to this dread disease. But, outwardly at least, Robert expressed neither anger nor fear. He actually tried to comfort me by making light of it and saying, "Erik, this is one of the few exclusively male clubs left in America!" And he went on to suggest that perhaps God was defining a new area of ministry for him.

It wasn't until some time later that I learned Robert's initial prognosis – he had been given just fourteen months to live...

...At Christmas time in 1998, Robert sent me an incredibly inspiring card that he had made. Its text gave clear evidence of profound spiritual growth, as well as of extraordinary inner strength. And it was beautifully expressed:

Glorious God, my Creator and Lord,
This day is all praise and thanks
For all my days.
I breathe and it is Your breath that fills me.
I look and it is Your light by which I see.
I move and it is Your energy moving in me.
I listen and even the stones speak of You.
I touch and You are between finger and skin.
I think and the thoughts are but sparks
from the fire of Your truth.
I love and the throb is Your presence.
I laugh and it is the rustle of Your passing.
I weep and Your Spirit broods over me.
I long and it is the tug of your kingdom.
I praise You,
Glorious Heavenly Father,
For this curious day,
For the impulses that have made it unique
To Gerda and to me,
For the gifts that grace it,
For the gladness that accompanies it.
I thank You for all the undeserved blessings
You have given us:
Each special person you have placed
Here in front of us this day, that we might nurture and
love them in Christ's name,
For the affliction you have given me and the
Comfort wherewith I may comfort those who
Also are afflicted.


I pause to praise and thank You
With this one more trip of words
Which leaves too much uncarried,
But not unfelt,
Unlived,
Unloved.
Thank you, my dearest Jesus,
My Lord, My God, My All in All!

My first reaction was that my friend had just written the 151st Psalm! But I soon learned that, since attending a Promise Keepers gathering in Philadelphia during the preceding summer, Robert had written a number of "psalms." He wrote them at his high points and at his low points. He incorporated many of them – particularly psalms of encouragement – into countless cards that he sent to the men and families to whom he was ministering....

In July of 1996, Robert Alexander – Marine Corps veteran, insurance executive, devoted husband, committed Christian – was told that he had inoperable prostate cancer and that he had fourteen months to live. By dint of his considerable intellect, gritty determination, unwavering support from his loving wife Gerda and a growing faith, he lived four and a half more years and launched a ministry that literally touched thousands of people.

In Semper Fi: The Psalms of Robert Alexander, the author has preserved the poignant and inspirational writings of a remarkable man. They are presented within the context of parallel spiritual and physical events in his life, including both times of trial and times of triumph. This "devotional biography" will encourage and inspire all who read it.

Erik Pettersen, a business development consultant and former nuclear submarine officer, was a close friend of Robert Alexander during the last eight years of his life. He and his wife, Linda, live in Annapolis, Maryland. They have two grown children.