an historical novella of terrorism and traditional spirit and other stories 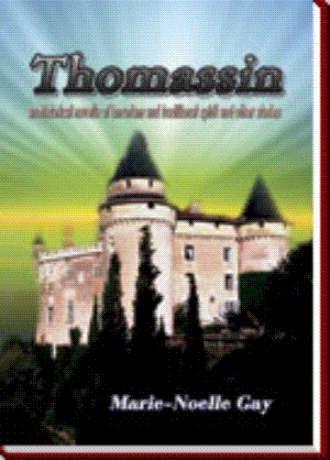 Only two months ago, had such an important clergyman called on him, Thomas would have offered the munificence of his welcome at home: Attendants bearing trays of meat and sweets, flagons of Thomas's best wine, ewers of sweetened water and basins to wash the hands of the visitor before he partook of refreshments, fur slippers to place on feet weary of the stirrup.

But here, in this dismal place, all he can offer the visitor is the grimy and dusty rest of a rough coffer, the sole furnishing in the room besides the three pallets upon which Thomas and his men have been taking their dubious rest.

The abbot twists his body to lean over Thomas. His two blessed priestly fingers touch Thomas's head and form the sign of the Holy Cross on the prisoner's forehead. The unctuous voice whispers so low the guard at the door could not possibly hear a word.

Thomas readies to proceed with the formula of confession, learned at his mother's knees.

The abbot confessor twists himself even more as he bring his index down on the grimy surface of the coffer. There, between Thomas's elbows, the index draws letters. Thomas reads, «G, L, O.»

The abbot whispers, «Yes? My lord?»

With the edge of his sleeve he covers the three first letters of Thomas's ducal name. Imperceptibly, the abbot pushes Thomas's elbows away from the surface of the coffer, holding the imprisoned duke's right hand in his left. By no means does this slight movement attract the attention of the guard who, intent on nonintrusion in the prisoner's confession, has turned his back away from the two men and faces out into the dungeon tunnel.

She always told the same story, and the boys listened attentively each time she told it. She sat in the old transatlantic chair called a porte-veau that Grandpa, the "French flyboy", had brought as his only possession over half a century ago, and which he kept clothing of new tarpaulin each decade.

He always managed to be out of the room when she spoke Blondie's name. If he were near, within earshot of her when she started, Grandpa would protest and tell her to wait just a little while to continue, he would be done and gone in a jiffy. As soon as he could, hands still wet from cleaning up after mixing the calves formula, or an armful of tools held out in front of him, he would clomp out of their sight. Now she could go on; now he would not be offended by her sornettes, those silly women's tales she would do better to keep for herself and not worry the boys with.

She usually pretended to ignore him and barely stopped in the begun tale, the two boys watching her with their mouths open and their eyes big with pupils dilated in the semi-darkness of the farmhouse kitchen. Somehow she always found the darkest, the quietest time of the evening to start telling the boys the old story. She stalled only a few seconds maybe, enough to get rid of Grandpa. Then, she would hold out her hands, one to each boy cross-legged on the floor in front of her. They hung on and never said a word except to ask: "And what then, Grandma?" if she faltered, her attention drawn elsewhere, inside her memory, deeper than the story itself. This happened

THOMASSIN ...and other stories,

is a collection of intriguing tales.

The title piece, an historical novella, is based on the tweaking of historical facts; the old game of "what if." THOMASSIN goes back and forth between some advanced date into the twenty-first century and the end of the fourteenth century when a Duke of Gloucester saw his last in the jail at Calais, then held by the English. In this story Thomas Gloucester does not die. Destiny intervenes seven centuries later in the life of Mademoiselle Marianne Thomassin, Sorbonne student, during the quest for her first passport and a visa for the United States where she has been accepted as a foreign student. Modern terrorism and the spirit of traditions inhabit both medieval and modern events. At both junctures it is difficult to tell the good from the bad guys. The other stories, like THOMASSIN, feature interesting and strong women who, at whatever time in history and on whatever continent, turn the proverbial lemon into lemonade but with a twist of inventiveness and courage. Gay's writing is imaginative, profound, provocative, and at the same time, entertaining.

Marie-Noëlle Gay lived in Normandy during her childhood where she survived WWII, D-Day, and the Battle. As such, and because of the connection between the English Crown and the Duchy, she bears a particular interest in history. Gay was educated in France, Ireland, and the U.S. She holds a B.A. from Indiana University-Herron Art, two M.A.'s from the University of Louisville, in creative writing, and in French for which she defended a thesis on Simone de Beauvoir. Much of Gay's writing is about the constrictions and possibilities in the lives of women. Her work has been published in Forum, Tropos, West Virginia University Philological Papers, Kentucky Poetry Review, Kentucky Writing, Pegasus, Louisville Courier-Journal, Writers' Corner Magazine, American Jones, and THEMA.