Stories from the Storyteller 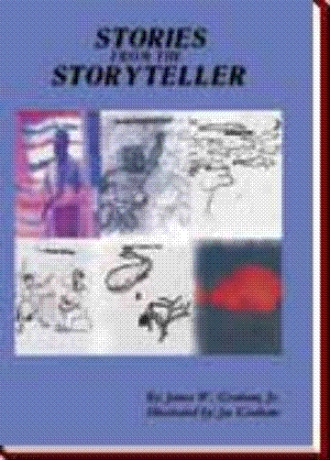 Marlow was a young lion who did not always listen to his mother. His mother was always telling him to stay close to her and the family but he loved to wonder off. One day, Marlow realized he might have gotten himself in big trouble by wondering off when he began to hear sounds in the bushes around him. He began to smell the air as his mother told him to do when he was in a new territory, and he thought he smelled hyena. He knew he was in trouble because hyenas were always trying to eat young lions. Marlow remembered what his mother had said to do when he was in trouble-- pray. Marlow closed his eyes and prayed to Papa GOD to send help.

When Marlow opened his eyes, he saw little Remington running up to him yelling, "Hey, Marlow, guess what I can do."

Marlow looked up to the sky and said, "GOD, I asked for help, and you sent little Remington. I don’t understand."

Just then, Remington said, "Look." And, he raised his tail and sprayed the bushes. All the hyenas that were in the bushes began to yell and run away. You see Remington was a little skunk.

Always remember this, because it is true,

GOD can help you with anyone, and in any way he wants to.

JESSIE AND THE KISS

Jessie was tired. He had worked all day long. The overseer had acted as if his only mission in life was to make it hard for him. Jessie had planned on running away that night, but he knew he was too tired. It was all he could do to walk to the well for some water. As he leaned against the well, he closed his eyes, and remembering what Ned had told him about praying, he called out to GOD from within himself. "GOD, I need you. I can’t find anything but misery in my life. Please show me something good."

"Jessie." Jessie heard his name and turned around to see High John the Conqueror standing there just like GOD sent him, ‘cause GOD did send him. I don’t think anyone else saw him but Jessie saw him.

Jessie held his arms out as he was told, and John disappeared.

Then, Lizzie, who had been walking past, tripped on a root and fell into Jessie’s arms. Lizzie straightened up and told Jessie, "You saved me. My head would have hit the well if you had not been here. GOD is good for putting you here for me when I needed you to be here. "

After that Lizzie gave Jessie a big kiss right on his lips. It was longer than most thank-you kisses, but if the truth is known, I think it was something Lizzie had always wanted to do. When she finished she said, "GOD is good."

Jessie just stood there as if he was unable to move. Ned walked up and said, "Jessie, you all right? Speak to me, say something!" Jessie turned to Ned and said, "GOD is good."

You see though life can be hard one thing should be understood,

Yes life gets hard, but GOD is good.

The place, an elementary school in suburban Detroit. A bright eyed, excited student steps up to the front of the class after being chosen from the sea of eager hands of her classmates. The student reaches into a brightly colored cloth bag and retrieves an object which is given to "The Storyteller" who intern uses it as a launching pad into the world of an original fable filled with fun, excitement and lessons for all.

This illustration gives insight as to the genesis and usage of "Stories From The Storybag". Other works included in this book, "Holiday Stories" and "Jonah’s Whale’s Tales" had origins which include my attempt of taking an egg and a bunny, (remembering bunnies don’t lay eggs), and connecting them to Christ on the cross, and my favorite, while needing a fish story, I used a whale looking for his purpose in life who ends up transporting a wayward prophet to the place GOD told that prophet to go, all in the context of an African storyteller. The latter two groups of stories as well as "Proper Prayer" were created for use in Sunday school, however, my favorite group of these stories "High John The Comforter", had its intended audiences in prisons, churches and auditoriums for adult audiences for many occasions, including one funeral.

Even though I call myself "The Storyteller", I do acknowledge the true source of these stories is "THE CREATOR". This book is a combined effort of my immediate family to acknowledge "THE CREATOR" as "THE REAL STORYTELLER".

Imagine standing in a church pulpit overlooking the coffin of a close friend and former patient, with a church full of mourners, while attempting to fulfill her last request by telling stories. Try to picture a day which starts by telling stories to a class of first graders, followed by treating homebound physical therapy patients (some of which include: a terminally ill seven year old; a ninety-three year old stroke victim who lives alone; and a mother of four who goes into a comma and has to be sent to the emergency room) and ending the day by participating in a workshop for incarcerated individuals in one of the local prisons. These are examples of the experiences which THE REAL STORYTELLER has used to bring James W. Graham, Jr. to the present point in which he calls himself a storyteller.

As a husband, father of two, a former physical therapist and former Sunday school teacher, James is now pursuing a career in special education. He feels The CREATOR shaped his life into that of a storyteller by including: his now deceased father, who fostered a love of storytelling during the much remembered bed-time stories; his mother, a former teacher; his sister a dancer who introduced James to his storytelling mentors, Jamal Koram and Opalanga Pugh as well as to African culture; and his wife and kids who were often forced to lend an ear to his storytelling.

In 1992, what started with reading to his children at night has taken the form of delivering the message in churches, performing in parks, auditoriums, school classrooms, detention centers and prisons. With each experience James is the first to admit he received as much or more than THE CREATOR gave, when James was used as a storyteller.

It is with the preceding in mind that one can better understand the genesis of STORIES FROM THE STORYTELLER.