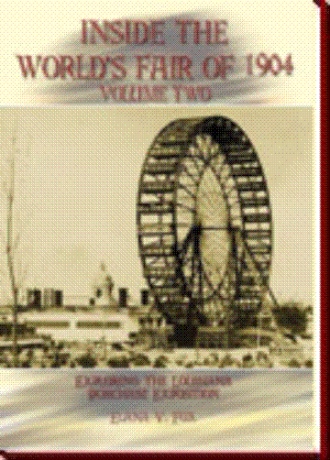 The blue dome of CREATION was located mid-way up The Pike and reproduced the Coney Island concession of the same name. The concession consisted of a half-mile gondola ride through the story of Creation, adapted from The Bible. The ride started with a 1,000 ft backward glide in a gondola within a blackened cavern. Patrons were enthralled as staged scenes lit up when they passed. They disembarked at a landing where various illusions assaulted the imagination. At a turn in the path they encountered the head, bust, and arms of a live woman (magically appearing dismembered) sitting atop a table. Further along was the appearance of a man’s head, pierced by pitch forks. The head moved and cried out as the crowd searched out the mirrors that had created the illusion.

The patron then climbed a darkened stairway to find himself on the banks of a canal. As brightly dressed voyagers moved along in boats, painted scenes on canvases portrayed a Roman temple and Venice of the First Century. The patron stepped onto a circular moving platform about six feet wide and then onto a stationary platform which contained seats for those needing to rest. A Barker then called out "This way to the boats," and patrons were sent down another darkened stairway to find themselves directed back up a new dark staircase. They departed the staircase, finding themselves again in a boat on a rapid ride past more canvas scenery depicting ancient cities. But, this too was an illusion and, in fact, the boat was stationary while the scenery rotated around the patrons. Eventually the boat illusion ended and patrons exited into a grand auditorium, seating 300-400 people. Upon a high, blue-domed ceiling would be projected the celestial displays of creation. Then a red-blaize screen rolled to the sides to open upon a revolving stage where scenes could be portrayed.

Soft music preceded a peal of thunder and, in the midst of a storm, the temple walls seemed to melt away, with the room became completely dark. Then a loud voice boomed: "The Lord made Heavens and the Earth in six days." "Let there be light" was obeyed as a soft glow of dawn pervaded the inside dome, increasing in intensity through the glare of day and then back to the fainter glint of dusk as the First Day closed. "Let there be firmament," proclaimed the voice and the darkened ceiling exploded in pinpoints of light as stars and planets appeared. "Let the dry land appear;" and the oceanscape rolled back to reveal land, trees, and the flowers of the Garden of Eden upon surrounding stages. "And The Lord made two great lights" rolled through loud speakers while the sun and moon appeared projected on the ceiling. "Let the waters bring forth living creatures" was called out while strange shapes moved beneath the boat around the patrons. Birds started singing and reptiles and dinosaurs showed upon the stages, roaming through forests. "Let us make Man after our image," cried out the voice and the form of Adam was seen on stage. As an actor lay on a bed of roses with his back to the audience, a rib is seen to leave his body, wiggling in the air to a spot from which Eve stepped forward from behind the scenery. The scene closed with four angels standing at the head of three flights of stairs, surrounded by flower beds and shrubs. All at once the flowers became illuminated and the angels opened their eyes and spread out their arms to present the whole scene to Mankind.

As the show concluded, patrons were escorted out of a darkened arena into the noise and bustle of The Pike. The entire show ran about two hours through the course of all of the scenes. 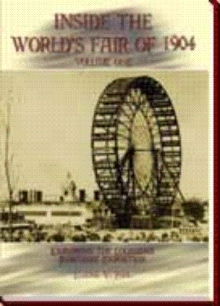 Elana V. Fox holds a Bachelor Degree in English and a Masters in Social Work. Born and raised in St. Louis, she holds memories of trips to Forest Park, the location of the World's Fair in 1904, and tales of the fair from local media sources. In 1995, she completed the artwork and successfully printed The Official Coloring Book of the World's Fair of 1904, an introduction to the fair for children. In completing research for this venture, Elana discovered that resources were limited in their scope of the fair and decided to compile a definitive look Inside The World's Fair of 1904. Look forward to her upcoming fiction novel, The Isle Below.