Dead Eyes Watch Over the Rhein 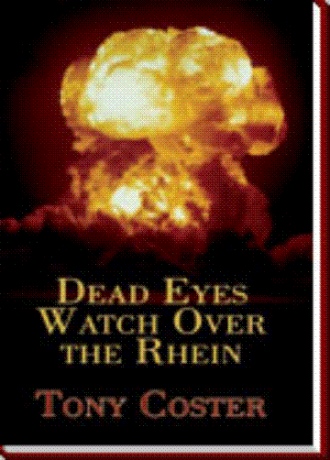 Thundering clouds passed into the east. A last crackle of lightning lit the far night sky then faded away, returning the ancient German forest to pitch blackness.

In a tiny clearing a young man struggled to grow a campfire. Fragile tongues of light cast eerie shadows that played devilishly amongst the darkness and glimmered against small patches of dirt-encrusted snow. Winter still refused to yield to springtime’s power.

A damp earthiness pervaded the air; vague reminders of those who had gone to dust over the eons. The thought sent shivers down his spine.

The man leaned closer to the blaze for warmth and listened intently for night sounds from within the amber-hued woods. The quiet was profound and reassuring. At ease now, he sat a few moments and gave silent thanks for being alone and away from his everyday environment, crowded together with so many strangers. He felt much less lonely by himself.

Finally warmed up, he began his task.

Using a stick to clear an area on the damp ground, he made several strange marks. When finished, he softly, tentatively, almost shyly, unfolded a crumpled piece of paper and took a deep breath:

"Sanctified blackness, bless this seeker with knowledge of the dark. Deny me not the sweet secrets of death and the underworld. Show unto me the keys of decay and putrefaction, that I may learn the greater truth of regeneration hidden within your bounty. Bless me with the awesome power of the truth behind your cruelty and grant dominion over the gray beauty inherent in your graces."

The night was moonless with a foreboding pitch-black sky. It was a night of emptiness, a time impregnated with the still, small whispers of new beginnings - the secret power hidden in the night of opposition to the Full Moon.

The man sat waiting for something to happen. A wind rustled through the forest and then died away. The darkness spoke . . . not directly, but in a whisper. Was it the coursing of his own blood through his own arteries, or something more real?

After waiting patiently a long while the man arose and laid out a goose down sleeping bag. Sitting down Indian style, he took out a tin cup, emptied his canteen of water into it and placed it into the fire to boil several minutes.

Using a stick, he retrieved the cup from the flames, mixed a packet of chocolate, and drank it in short urgent sips. Staring out into the dark night, he waited for the cold to leave his bones.

Oh, well. So much for Nudabeek and his stupid ritual.

Laying down beside the fire brought a shallow degree of comfort. It was difficult at first, but gradually the man felt safe and warm, at home in nature’s arms. He cast himself off, adrift in dreamless absorption.

A long while later an ominous rumbling woke him up. It was impossible to know in the dark where the sound came from but it was getting closer. He sat up and raised his wrist to see the time before remembering that he had left his watch behind.

Down a narrow dirt road a large gray Mercedes rolled towards his clearing like a massive battle tank.

F---in’ Rads . . . just like them to be driving around in the middle of the woods in

the middle of the goddam night.

As the car drew near, he noticed that the lights were on inside the cab. Four men dressed in suits – one in the driver’s seat, three in back – drove past the campsite.

One of the men in back glanced briefly at the campfire then quickly turned away, mind set on his own business. The one next to him looked back at the young man with wild, penetratingly fearful eyes.

These were eyes that burned into the soul, scorching the subconscious long after the car passed away into the darkness and out of worthwhile memory.

Disquieted, the camper sat wakefully for a long time.

Finally he lay back, rolling over to be closer to the waning fire, nearly falling into the embers. A few more logs went into the pit and he settled down.

Man, that was weird, even for Germany. Probably lost or looking for a shortcut to Grosser Neumann or something. Gotta try n’ sleep . . . work tomorrow.

The fire burned low and darkness again whispered its implied promise of safety.

The man seemed to sense a small voice in his head as he fell off to sleep but was too tired to listen or care.

‘Knowledge of the dark is not given freely.’

Out of nothingness two small vagrant lights hovered at the edge of mind then vanished like old men’s memories.

Some unknown place later he dreamt the falling dream. He had felt it before as a child. The rope he had hanged himself with as part of auto-erotic play had been too short. Only, maybe it hadn’t been play – he really couldn’t remember. The falling then had not lasted very long, though the struggle of toes to reach the ground had gone on forever. That singular time, his late uncle had discovered the embarrassing deed and cut him down.

How long he fell this time he could not say, nor the destination, nor the end. At times he was like a new snowflake, gently wafting together with others in a breeze, uncaring where he would land. At others, the descent was far quicker, steeper.

He stumbled, hoisted up by a host of unseen brutal arms that carried him forward to the place.

He came to final rest on a musky bed of dead leaves, was roughly fitted with binding instruments, and lay sucking hasty gulps of air. The weight of his body left him as he was hoisted upright into the air effortlessly, as if without opposition of gravity.

A long scissored moment existed between the fear-ridden light of soul and dark eternity; together, terrible in their exacting clarity. Muffled cries were all that came from the throat; the tongue had been torn out and left for crows.

The dropping came, followed immediately by immense tightening and subsequent choking. His eyes bulged lewdly out of their sockets.

The heart, no longer his own, thumped faster and faster as the sharp bite of the choking implement bit deeper into mortal flesh. Fear followed burning pain before dreadful release blotted out eternal light.

A final frantic ripping asunder of body and spirit brought oblivion to the mind, a sharp sudden blankness and absence of all sensation. Death.

Gray dawn gathered above the eastern hills, allowing the unborn suns tepid rays into the woods and creating fallow, sullen shadows in their wake.

The scream was loud and shrill beyond description.

The young man jumped out of his sleeping bag and stood, ramrod straight, at full attention. Picking up a great branch laying nearby he fiercely prepared to stand his ground, shifting his head in rapid motions towards all sides to try and see where the scream had come from.

"Christ Almighty! What the hell was that?"

His heart thumped in his throat. He paused, took deep full breaths and tried to calm down.

It occurred to him how ridiculous he looked, standing naked from the waist down in the frosty German wood

DEAD EYES WATCH OVER THE RHEIN

is the first of a series of several novels based around the character (and author pen name) Tony Coster. Tony is an unusual person in his sensitivities and proclivities, an engineer and also student of arcane and secretive occult practices.

In this first novel, Tony is a young Sergeant in the U.S. Air Force in 1973 who inadvertently becomes embroiled in a cataclysmic Cold War plot. Tony must grow into a man quickly, overcoming great personal tragedy and the destruction of his career. There is murder, terrorism, war, and a vengeful ghost.

Tony Coster has spent a lifetime pursuing different interests. For the most part, he has made his living as a Silicon Valley engineer, specializing in technical telecommunications and, more recently, the Internet. After a stint in the United States Air Force, Tony traveled the country and different parts of the world and had a number of adventures; good source material for his writing. Tony’s interests also extend to philosophical, historical and scientific ideas. Tony describes himself as a ‘Jack of Many Interests’ and a believer in a bright future for humankind, though life’s experience has shown him some of the many problems along the way. Tony Coster is a pen name and also the name of the main character in the novel. The author makes no claim to having the courage or pluck of the character, qualities which he admires. The author feels he can best continue to write if he is able to maintain his anonymity.