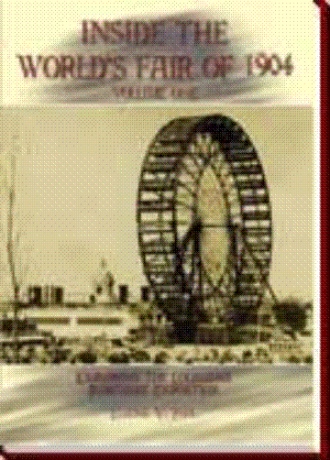 In 1904, St. Louis was the 4th largest city in the United States. The largest city within the lands acquired through The Louisiana Purchase, it was appropriate that this great city had gained the right to host what would become the greatest World's Fair. The one hundredth anniversary of the Louisiana Purchase, which gave the country significant masses of land through the Midwest, was just such a catalyst to stir the festive mood and invoke reason to celebrate all of the advances which the world had earned.

The United States, as a whole, was ready for grand festivities and worldwide attention. It had won major victories in The Spanish-American War of 1898 and was reveling in newly ceded lands of the Philippines, Puerto Rico, Guam, and the Mariana Islands (then known as Ladrones). Americans like Rockefeller, Carnegie, and Vanderbilt were making great fortunes around the world, from the tobacco industry in Cuba to silver and diamond mines in South Africa. Robert Peary had charted Greenland and was making efforts to reach The North Pole. By 1904, the Indians were on reservations, but it only took one generation back to still recall tales of meeting up with Hostiles. Parents could recant stories of The Civil War and sympathies in border states were still strong enough that discussions were avoided lest brawls broke out.

Victorian morality lived in the heart of the Midwest. In 1904, women's skirts were worn to the ankle and men favored bow ties, long sleeve shirts, starched collars, and turned up cuffs on their pants. Even in bathing suits, proper men would not be caught bare-chested in public. And everyone wore a hat, as much for propriety as ornamentation. America was still mostly an agrarian society in which children were in school all year round with a break only during tilling or harvest time. The normal workweek in the city was nine to ten hours a day, six days a week. Farmers, cattlemen, and miners could only dream of having those luxury hours. Electricity was available in the major cities and the only difficulty in making a telephone call across town was knowing someone else who had one of the new contraptions. Automobiles, trolleys, bicycles, and horse-drawn carriages all vied for the streets.

In St. Louis, wood cabinet refrigerators were selling for $4.98 while ice wagons plied the streets to keep the ice chests full. Chuck roast was 10 cents a pound and a quart of wine was a quarter. Indoor plumbing made bathrooms a convenience for the more prosperous. Young boys sold penny newspapers from wooden carts as they walked the major streets or hawked from a lucrative corner. Milk wagons rumbled along mostly cobblestone streets. Want ads sought male dishwashers for a salary of $30 a month and bookbinders for $19.50 for a 54 hour work week.

Penny & Gentles clothing store was selling corsets for fifteen cents and blouses (then known as "shirt waists") for a quarter. At the May's Company, finely tailored men's suits ran from $12.50 to $20. Women's shoes sold from $1.50 to $3.00 at Reid's Shoe store on North Broadway, while men's work shoes ran $2.00 to $5.00. A sturdy 10 hp automobile cost from $500 to $1200, but there were few to be seen. The St. Louis Buggy Company was still making more sales on horse-drawn wagons than Oldsmobile was making on automobiles.

In the city, modest rooms rented for $2.00 a week while entire homes rented out for around $10 to $30 a month. Haase Realty had just sold a two-story, six room and bath brick house on Greer for $2,500 while Kollas and Brinkop Realty had transacted the deal for a two-story, six room and bath brick home on Wyoming for $3,275. Greer-Andel Realty obtained an amazing $16,000 for an eleven room brick mansion on West Pine, one the more influential areas of St. Louis.

High-class vaudeville played upon the stage of The Trivoli Theater on Skinker and bowling could be played at four games for a nickel at the ten-alley Uhrig's Cave at the corner of Jefferson and Washington Streets. Horse racing was the main event at the Delmar Race Track in Kinloch and at the Union Track at Union Boulevard and Natural Bridge. Forest Park Highlands offered carnival rides, games, and vaudeville amusement to bring relaxation to the weary masses. The Odeon, largest theater in St. Louis in 1904, was playing Kiralfy's Louisiana Purchase Spectacle, a vaudeville presentation of The Fair, with matinee prices running from .25 to $1. Lew Dockstader's Minstrels were playing at the Century Theater. And the St. Louis Browns were batting them out of Sportsman's Park at Grand and Sullivan while Jailai could be enjoyed on a field at Kingsbury and De Baliviere.

In retrospect, it was a magical time, moving from The Victorian Era to the cusp of The Industrial Age, and the start of a magnificent century. Great fortunes had been made by those who had the grit to invest time and energy in the oil and gold fields and the new wealthy were creating a market for ready- made and luxury items. Transportation was becoming a major industry, not merely a word to describe how you got from one town to another. Farms were thriving with still-fertile topsoil while cities were bustling with new jobs in fields not even dreamed of by the previous generation.

New inventions were liberating people in a manner never before achieved in history. Telephones and motion pictures were increasing communication. Automobiles and trains were encouraging mobility. And basic appliances such as washing machines, vacuums, electric lamps, and indoor plumbing were making leisure time possible for even the average homemaker. For the first time in history, new inventions were changing culture rather than any culture guiding the impact on what items and styles were popularized. 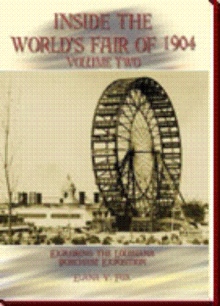 Elana V. Fox holds a Bachelor Degree in English and a Masters in Social Work. Born and raised in St. Louis, she holds memories of trips to Forest Park, the location of the World’s Fair in 1904, and tales of the fair from local media sources. In 1995, she completed the artwork and successfully printed The Official Coloring Book of the World’s Fair of 1904, an introduction to the fair for children. In completing research for this venture, Elana discovered that resources were limited in their scope of the fair and decided to compile a definitive look inside the World’s Fair of 1904. Look forward to her upcoming fiction novel, Mysterious Fallings.