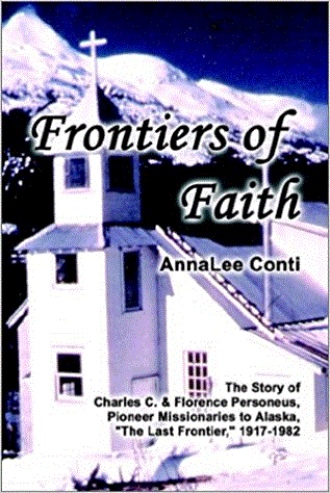 One morning, a thunderous roar awakened them. The house quivered. At first, they thought it was an earthquake, but then they discovered a huge avalanche had come down across the road just below the village. It looked as though their route to the coast had been cut off.

It continued to rain, and the Personeuses prayed and waited. Then came a sharp cold spell, and everything froze solid, including the avalanche. The men went down and cut a narrow trail over the top of that mountainous heap of solid snow so the dogs could pull the sleds over it.

On a clear, cold morning, the twelfth of March, the Personeuses set out for the coast. Most of the village came to see them off, giving them gifts of moccasins, hand-woven baskets, and other things they had made.

The fast sled was covered with bearskins and heavy blankets and padded with pillows for Mrs. Personeus and Byron, who sat at each end facing one another. The skins and blankets were wrapped around them and fastened securely to the sled with chains. No way could they possibly fall off the sled. Mrs. Personeus prayed silently that no rabbit would pop out of the underbrush.

The Yukon sleds had two handles in the rear like wheelbarrow handles that were used for pushing a heavy load. On the back of the sled was a little platform where the driver could stand and ride when the trail was good. Long poles along the sides were used in guiding the sled.

Their driver was a young Native named William. He shouted, "Mush! Mush!" and off they went. To turn left, he would holler "Haw!" and "Gee!" to turn right. The wooden sled bumped over the rough trail, jarring every bone. Even with the pillows and blankets for padding, a dog sled ride is far from comfortable. And Mrs. Personeus still had not recovered from her fall.

When they arrived at the avalanche, William felt it was too steep for the dogs, so he unchained his passengers and let them climb up over the huge mass of snow, while the men pushed and pulled to get their sled and the baggage sled up on the slippery trail. On the other side, Mrs. Personeus and Byron were again strapped in for the long, cold ride.

At first, the two sleds kept together, but gradually the faster sled pulled farther ahead. Soon the baggage sled, with Mr. Personeus and the other driver trotting along beside it, were left far behind and out of sight, as William kept calling, "Mush! Mush! Mush along!"

As they came around a curve in the road, they saw a huge glistening mound of ice, where a small stream of water had been running across the road all winter, freezing in thin layers as it ran over the bank and cascaded 50 feet to the river below. The tops of some scrubby trees were sticking up through the ice along the bank.

As they neared the "glacier," William called to the dogs to stop. Then with a small axe, he began to chop a narrow trail over the slick mound, so the dogs could get a foothold. Even then, Mrs. Personeus did not like the looks of that slippery trail.

"Won’t you unfasten these chains and let us walk over?" she asked.

William only answered, "I think I can get you across." Then, grabbing the handles of the sled, he yelled, "Mush! Mush along! Mush!" Valiantly, the dogs started forward.

Up they went on that gigantic icicle. Mrs. Personeus almost held her breath. Just as they neared the top, she saw the lead dog was slipping. He had missed the toeholds William had chopped, and began sliding toward the riverbank, pulling the next dog after him, and then the next one and the next. The dogs struggled hard to get their footing. The sled was now sliding at a tilt. William came up beside Mrs. Personeus and pushed the tipped sled along the side of the mound of ice, bracing his feet on the little branches of trees sticking up through the ice. Mrs. Personeus felt as though the sled were going to turn over and plunge to the river below. She reached out her hand and caught at a sturdy branch and pushed with all her might. Then she let it go and grabbed another as the sled inched forward, the driver holding it to the slippery slope.

Finally, the ice flattened out on the other side, and they were able to get on the trail again. Mrs. Personeus breathed a sigh of relief. Then the road dipped down nearer to the level of the river. Far ahead, they could see another, larger mound of ice across the road.

William said, "We go out on river now," and called to the dogs to turn off the road. Soon they were skimming over the frozen river.

The sun was shining brightly. The mountains towering on either side glistened a dazzling white in the sunlight. The vast stillness dwarfed the travelers, for there was no sign of human life in any direction, save for the lone sled.

Mrs. Personeus detected a note of fear in his voice. She knew that if a big, strong man felt fear, there must be danger somewhere, but she could not imagine what was frightening him.

William yelled frantically at the dogs a few more times. Then, with no word of explanation, he let go of the sled and ran toward the bank of the river.

Are we at the mercy of these dogs?

she wondered with dismay.

Then a still, small Voice whispered to her heart, "No, at the mercy of God." A sense of peace flooded her soul.

Little Byron asked, "Mama, where did William go? Why did he run away?"

Looking across the river toward the bank about a quarter of a mile away, Mrs. Personeus caught a glimpse of William trotting along. The dogs ran steadily onward for a mile or more. Then, not hearing the encouraging "Mush along!" they began to slow down. Suddenly, William was back, grabbing the handles of the sled and yelling, "Mush! Mush along!"

As they sped over the ice, Mrs. Personeus asked him, "Why did you leave the sled?"

"That thin ice," he replied. "Last week it all open water when thaw took thick ice down river. I try turn dogs from thin ice. They no go. Then I take my weight off sled; maybe they take you across. This old, thick ice now."

“Alaska – Land of Ice and Snow? Why would you want to go there?” This was the response when Carl and Florence Personeus told people of their call to Alaska as missionaries in 1917. No accurate information about Alaska was available, but the newly-weds embarked on their journey to “The Last Frontier” by faith.

Come along on their adventurous faith journey that spans the years from Gold Rush to statehood and beyond in Alaska, America’s “Last Frontier.”

The author, AnnaLee (Cousart) Conti, granddaughter of Carl and Florence Personeus, is a fifth generation ordained minister of the Gospel in the Personeus family. AnnaLee grew up in Alaska and met her husband, Bob, while they were students at the University of Alaska, Fairbanks. They have pastored in New York State for twenty-five years, including pioneering a church. They have a son and four grandchildren.

AnnaLee (B.A., University of Alaska; M.A., Assemblies of God Theological Seminary) has for years written church school curriculum and freelance articles published in magazines, including The Pentecostal Evangel and Woman’s Touch. She also teaches GED and adult basic education classes, in addition to adult Bible classes in her church.