The Biological Effect of Deuterium Depletion 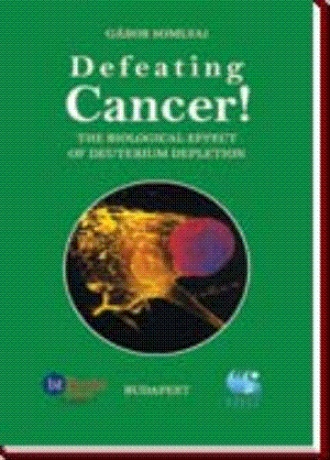 We have already mentioned the complex process leading to the appearance of tumors in the human body. The question justly arises as to where and how deuterium depletion can have a positive influence on the outcome of this complex process. It is also clear that the appearance of tumors can be attributed to two main causes: one being an increase in the number of genetic defects, the other the increase of genetically defective (tumorous) cells. The former results in the greater probability of the tumorous nature of a given cell, the latter leads to the fact that with an increase among cells of a tumorous nature, there will probably be one or more tumor cells which, due to newer genetic defects will be able to evade obstacles preventing tumor growth, rendering cell proliferation utterly uncontrollable.

In connection with the "anti-cancer" effect of deuterium depletion we do not claim that by consuming Dd-water the number of mutations is decreased, although there are numerous arguments for this as well. (It has been experimentally proven by that in a medium with a higher than natural D-concentration, the number of mutations increases, so there is a good reason to presume that the presence of deuterium can be considered to be a mutation factor, thus, low D-concentration could as well decrease the frequency of the incidence of mutations.)

Of greater importance is to analyze the effect of deuterium depletion on tumor cells. Based on our observations so far, we can state that with the consumption of Dd-water the lowering of D-concentration may inhibit tumor growth and consequently may lead to partial or complete tumor regression.

This effect of Dd-water is reinforced by several data:

Our basic research results are in harmony with the work of researchers abroad and prove – both macroscopically and on a molecular level – the anti-tumor effect of deuterium depletion. We suppose that the presence of deuterium is vital for cell proliferation and that cell division is triggered by the change of the D/H ratio (the ratio of D temporarily increases in contrast to that of H). When the patient consumes water of a normal D-content, tumor cells have no problem ensuring the D/H ratio needed for division. However, when we decrease the D-concentration of the body through deuterium depletion, either the conditions for cell division do not exist, or the tumor cell can only achieve this ratio considerably later. We thus deprive tumor cells of a most important factor: the possibility to ensure conditions for cell division.

As shown earlier, cells are able to adapt to several external effects. Over time there will always be some which are able to achieve – through a genetic change – an advantage over other cells and, by outgrowing their surroundings, to overcome the obstacle. These facts make deuterium depletion an effective tool in tumor therapy but they also set the limits of application. Deuterium depletion might be a successful means of destroying tumor cells because, in the adaptation process, healthy cells have an advantage over defective ones. This means that the unit decrease of D-concentration induces a stress in both healthy and tumor cells but healthy ones quickly adapt to the lower D-concentration, whereas tumor cells are unable to do so or most adapt much more slowly. If, in the meantime, D-concentration continuously decreases, the tumor cell is again subject to a newer stress, even though it was not able to manage the previous one. With the appropriate dosage of Dd-water, this process may result in the destruction of all cells constituting the tumor.

The constraints of the treatment are that the tumor, even if slowly, nevertheless is able to adapt to the new situation. The bigger the tumor and the more tumor cells the patient has, the easier. Unfortunately, there is a chance that after a certain time cells able to adjust to D-depletion will appear, resulting in further tumor growth. One of the directions of our drug development is to further enhance the efficacy of D-depletion by adding other materials. Another option is to administer Dd-water at the earliest possible stage together with other treatments even if the patient, due to surgical or other treatments, is tumor-free because in such cases the number of possible tumor cells is minimal, giving us the greatest chance to destroy them.

This book is an account of experiments carried out using deuterium-depleted water (Dd-water) and of the human clinical trials underway in Hungary. The most astonishing discovery was that healthy cells quickly adapt to the lower deuterium concentration, whereas tumour cells are unable to do so. This, in the majority of cases, resulted in the destruction of cells, a decrease in tumour mass, or its total regression. The discovery detailed in the book reflects an inherent possibility for mankind to start the 21st century in the hope of finding the cure for cancer.

Gábor Somlyai is a molecular biologist. Having finished his studies in 1982, he worked in the field of genetic engineering and gene mapping in Germany (1988 – Georg-August University, Göttingen) and in the USA (University of Missouri Columbia, Columbia). He was first inspired by Hungarian Nobel-prize winner Albert Szent-Györgyi, who believed that the true cause of cancer might be found at sub-molecular level. Somlyai began his investigations in 1990 with the examination of whether the naturally occurring deuterium – the heavy isotope of hydrogen – plays any role in the regulation of biological, i.e. intracellular molecular processes. His investigation was quite unique. The existence of deuterium has been known for nearly seventy years, and it is also known that it behaves differently from hydrogen and that in our body deuterium is present in 12-14 mmol/L concentration. Yet, nobody before had ever investigated the possible role of naturally occurring deuterium in living organism.